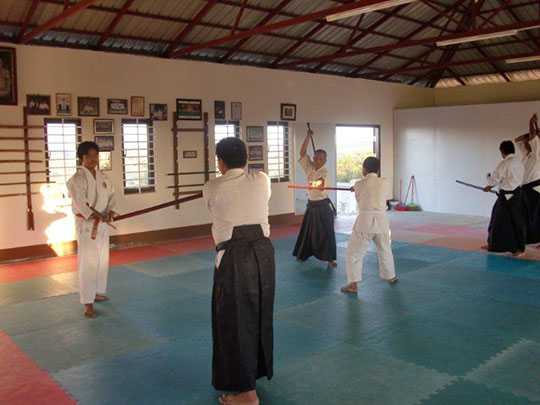 After visiting the AHAN Myanmar Learning Center in Yangon, I traveled north to Pyn Oo Rwin, about a two hour drive outside of Mandalay in the Shan state. Pyin Oo Rwin is a beautiful town surrounded by mountain peaks and is the new home of Myanmar Aikikai New Organization Renbu Kan dojo.

I had come to visit with U Mya Sein Sensei, Chief Instructor of Myanmar Aikikai New Organization. As I was given a tour of the new dojo, I couldn’t help but ask Sein Sensei, “This area is so beautiful but it seems so far away for students to travel, is it not isolated here”? Sein Sensei took me outside and said, “All of the land that you see around you has already been purchased and within a few years this land will all be developed. This area will be like the town of Aspen in Colorado in the future”. 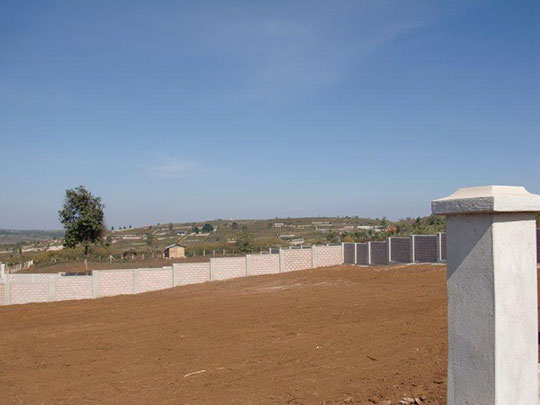 All of the land around the dojo has already been purchased; only fences now but many houses in the future. 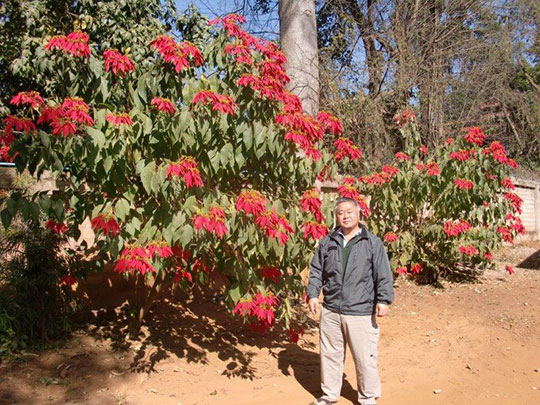 Poinsettias grow wild and large like this everywhere in this region!

The Chief Instructor of Renbu Kan dojo is U Mya Sein Sensei who practiced both at Aikikai Headquarters in Tokyo and at the Aiki Shrine Iwama dojo in Iwama under the late Morihiro Saito Shihan. Sein Sensei ran a lucrative business and dojo in the capital city of Yangon until moving to this beautiful city of flowers with his wife last year. Sein Sensei practiced under the Founder of Myanmar Aikikai, the late U Thaung Din and became chief instructor at the request of the late Founder Din who named Sein Sensei as his successor in his will. 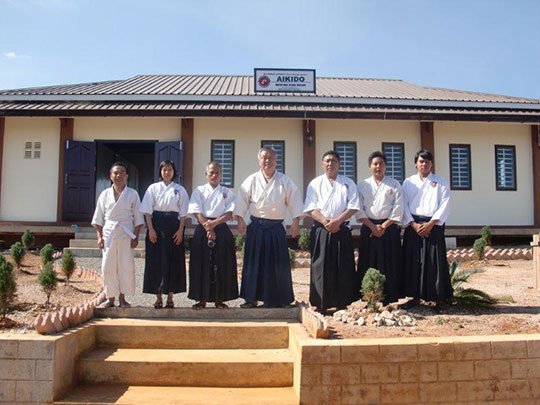 Homma Kancho and Sein Sensei with his dojo staff

The reorganization of Myanmar Aikikai is not the only example of high ranking Japanese Aikido shihan or senior JAICA Instructors meddling with the efforts of local instructors and “dojo jacking” local operations. This is a Japanese attitude with flashbacks to WW2! With eloquent words of “supporting youth and cross culture” many local pioneers have been railroaded by overlord Japanese organizations in many countries around the world. This shows a lack of respect for local Aikido pioneer instructors and is not good for the reputation of Japanese organizations in the world.

If you do happen to find yourself in Myanmar and wish to practice Aikido it is worth the trip to travel to Sein Sensei’s Renbu Kan dojo in Pyn Oo Rwin, where Aikido is practiced with the purist heart and spirit of budo.