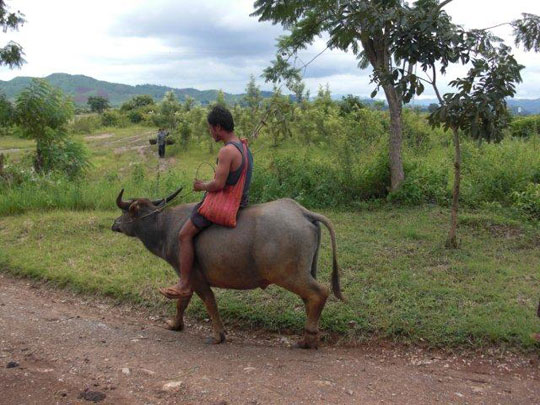 What a surprise! The boy riding the ox, Nippon Kan’s logo- in real life!

This September, Nippon Kan General Headquarters organized an official tour to Myanmar. The purpose of this tour was for research and development of AHAN projects in Myanmar instigated by Homma Kancho on his first visit to Myanmar in the spring of this year. Homma Kancho was accompanied by myself, Emily Busch, AHAN International Program Director and four senior Nippon Kan members.

On his first trip to Myanmar this past spring, Homma Kancho selected the Yadanapon Yeiknyein Orphanage founded by U Margainda as a focus for AHAN assistance and development. On this September tour, the Nippon Kan delegation visited the orphanage in Yangon on three occasions.

With more hands to carry goods, we were able to carry 350 pounds of children’s clothing donated by Nippon Kan family members and friends, a computer, sewing machine, medical and educational supplies from Nippon Kan Headquarters. This facility houses about 100 children, so we also organized the delivery of 250 kilos of rice on a monthly basis. 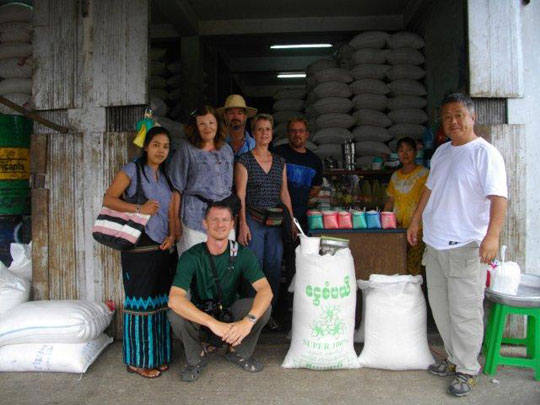 Arranging for rice deliveries to the orphanage. 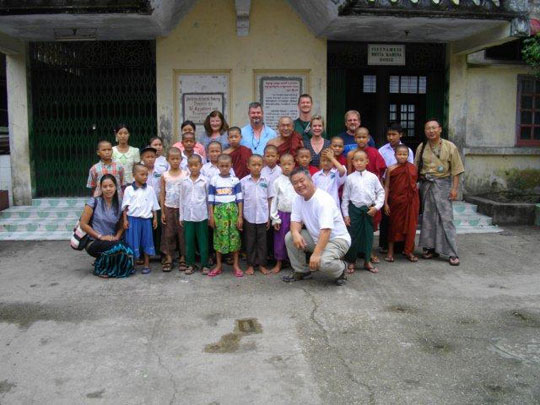 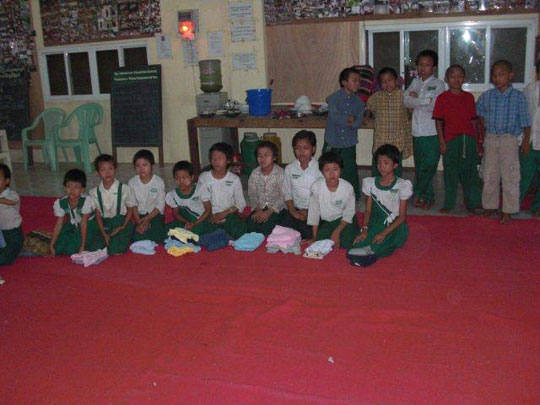 350 lbs of clothing and other supplies for the orphanage.

Myanmar has a long history of Buddhist tradition and it is customary in Myanmar for orphaned children to be cared for at local Buddhist temples. There are many large temples in Myanmar that are well supported by their communities, but as is common in many places, the small temples struggle to support the daily care for the children left in their charge.

On his first visit this spring, Homma Kancho met Nilar Than, who is now serving as Nippon Kan AHAN Coordinator for Myanmar. Nilar accompanied Homma Kancho to many temples before Homma Kancho made his selection of the Yadanapon Orphanage in the capital city of Yangon. There was one episode during a visit to the orphanage on this trip that was especially touching. 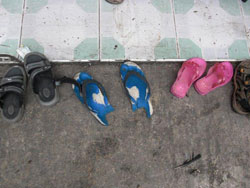 A well used pair of sandals 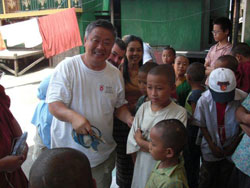 Are these your sandals? Homma Kancho asks with a smile.

We were about to leave the orphanage one day, when Homma Kancho noticed a pair of flip-flop sandals that had been left on the steps by one of the children. The sandals had been worn so long, that the heels of the sandals were completely worn away; they looked like someone had taken a large bite out of both of the heels. “Whose sandals are these?” Homma Kancho inquired with a big smile. At first no one came forward as a silence fell over the children gathered around. Finally one of the boys pointed to his friend and another boy pushed the boy forward out of line. The boy stood straight by himself with his arms folded tightly in front of him with a serious expression on his face. Homma Kancho asked kindly, “Are these yours? I think it is a wonderful thing that you have worn these sandals so long that you have worn the heels right out of them. You have used these sandals well and I am proud of you.” These words made the boy strengthen his crossed-arm stance and his face took on even more of a stern expression.

After saying our goodbyes, we returned to the bus, where Homma Kancho asked our guide, Nilar, “Did I make the boy angry by asking about his sandals? He looked so stern with my inquiry. “No,” replied Nilar, “In Myanmar, it is a common show of respect for children toward their elders to stand with their arms crossed with a serious expression. It is good manners here in Myanmar; he was paying respects to you with his expression.” 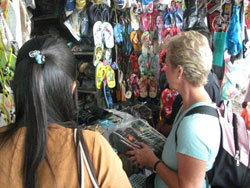 Emily and Myanmar guide Steve bargain for sandals in the market. 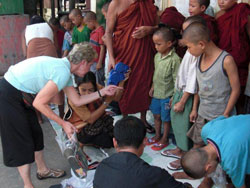 omma Kancho sat quietly for a moment before he said to the group, “I know we have other plans for today, but I want to go to the market and buy sandals. You can all go on ahead if you would like and I will catch up with you later.” Without hesitation, everyone in the group agreed that a trip to the market for sandals was the perfect event for the afternoon where we bought over 100 pairs of flip flops and sandals of all colors and sizes for the children.

Returning to the orphanage, the monks were a little surprised to see us again so soon, but joined in the fun as they called the children down to the courtyard. Homma Kancho put a brand new pair of sandals on the feet of boy whose sandals had worn through and said “I want to make a trade. One hundred pair of new sandals in exchange for your worn pair. Would that be okay? I don’t want to trade because I feel sorry that you have sandals that are worn, I want to award you these new sandals because of the care you gave your old ones; using them completely until they could not be worn any more. Your sandals without any heels are more valuable to me than any new sandal, and I will like to take them to the United States as a treasure for me.” The boy looked nervous, as Nilar translated carefully. The boy nodded in agreement and the fun began as everyone scrambled for new sandals to wear.

Later back in the bus, Kancho reflected, “When I was in elementary school in Japan, closed-toe shoes like sneakers were so valuable that they were worn until toes could be seen sticking out of worn and split seams. Most of the kids in school had to go barefoot during PE class. This was only fifty years ago in Japan and today reminds me of those days.”

Everyone sat quietly on the bus for ride back through the busy streets of Yangon, reflecting on the wonderful lessons we had learned that day at the Yadanapon Orphanage. 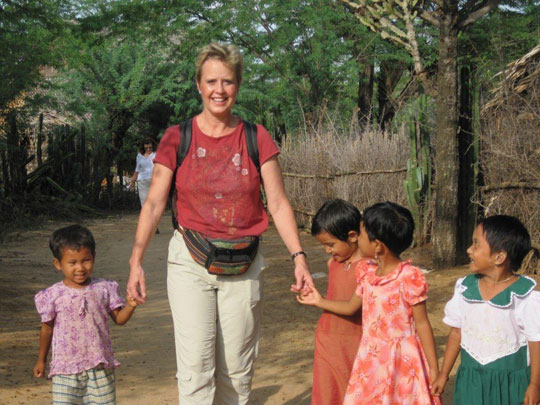 Today, the relationship between the United States government and the military government of Myanmar is strained diplomatically over democratic and humanitarian issues. Before coming to Myanmar I knew only what I had read about these issues. Labeling Myanmar as a “bad country” I do not believe is in any way fair to the wonderful people and overwhelming good that is also part of Myanmar’s history and culture. On this visit, I have never once felt in any danger or sensed oppression or unrest. We have been welcomed sincerely and treated with the utmost kindness and gentleness by every person we have had the fortune to meet. I have heard lately in the news that there is talk of new negotiations and dialog between our government and the government in Myanmar. I find this encouraging, and only hope that at our small level we can encourage more cross-cultural communication and exchange with the lovely people here. 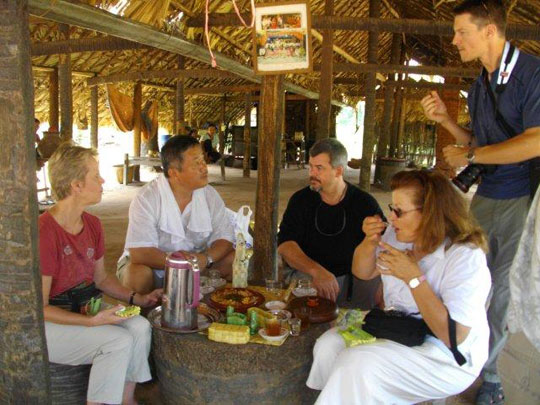 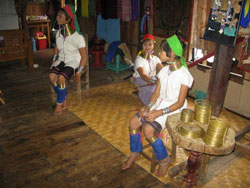 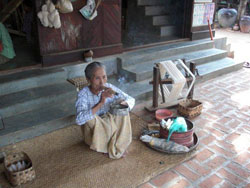 There are over 100 tribes living in Myanmar.

Besides visiting the orphanage in Yangon, our AHAN tour was filled with the wonders of Bagan, Lake Inle and Mandalay. We spent much of our time marveling at the history and the beauty of Myanmar and the wonderful people we met. Every member enjoyed the tour immensely, and as an extra bonus, we were able to practice Aikido with local Aikidoka in two cities in Myanmar. Link here if you are interested in more on Aikido in Myanmar!