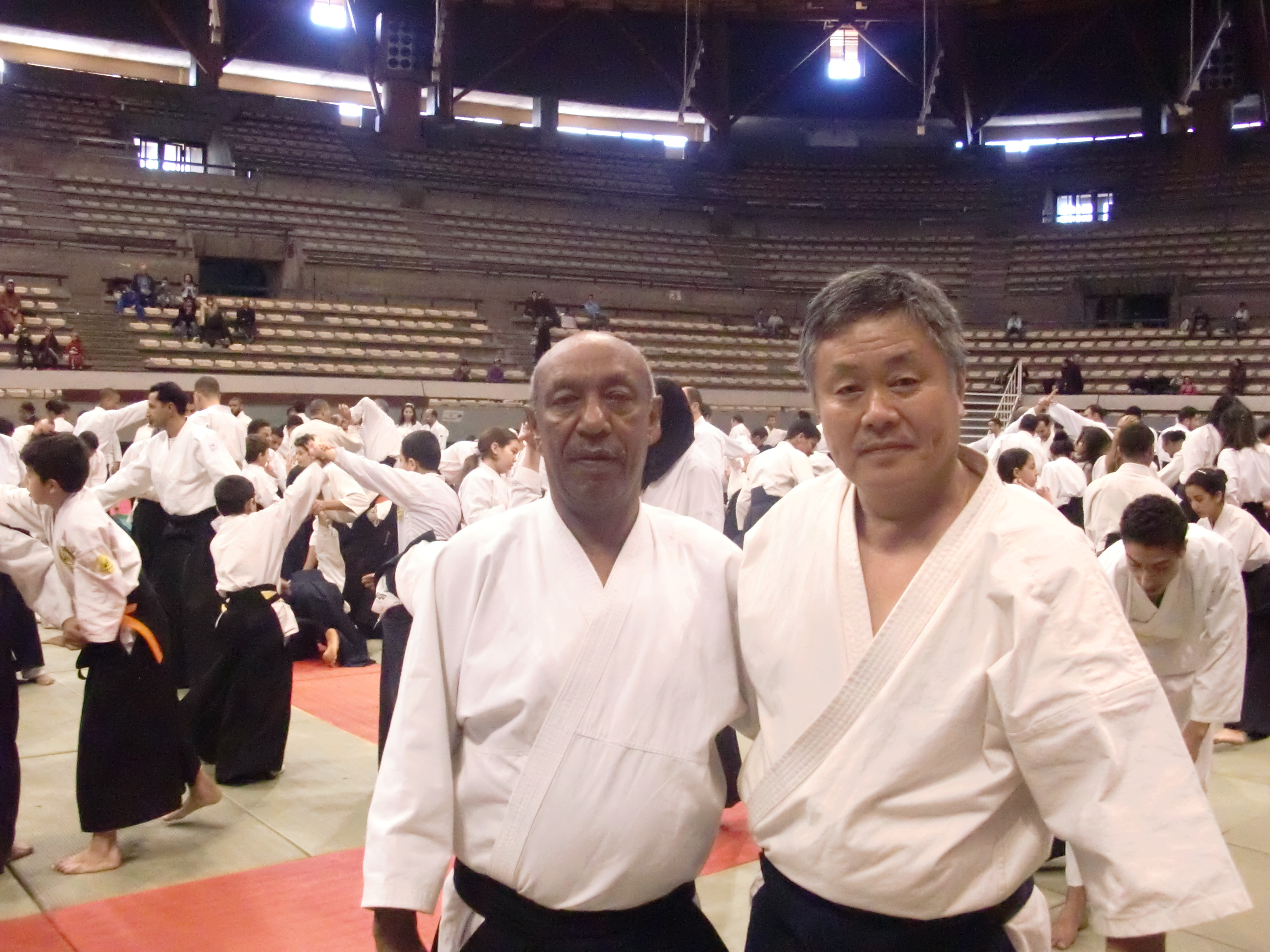 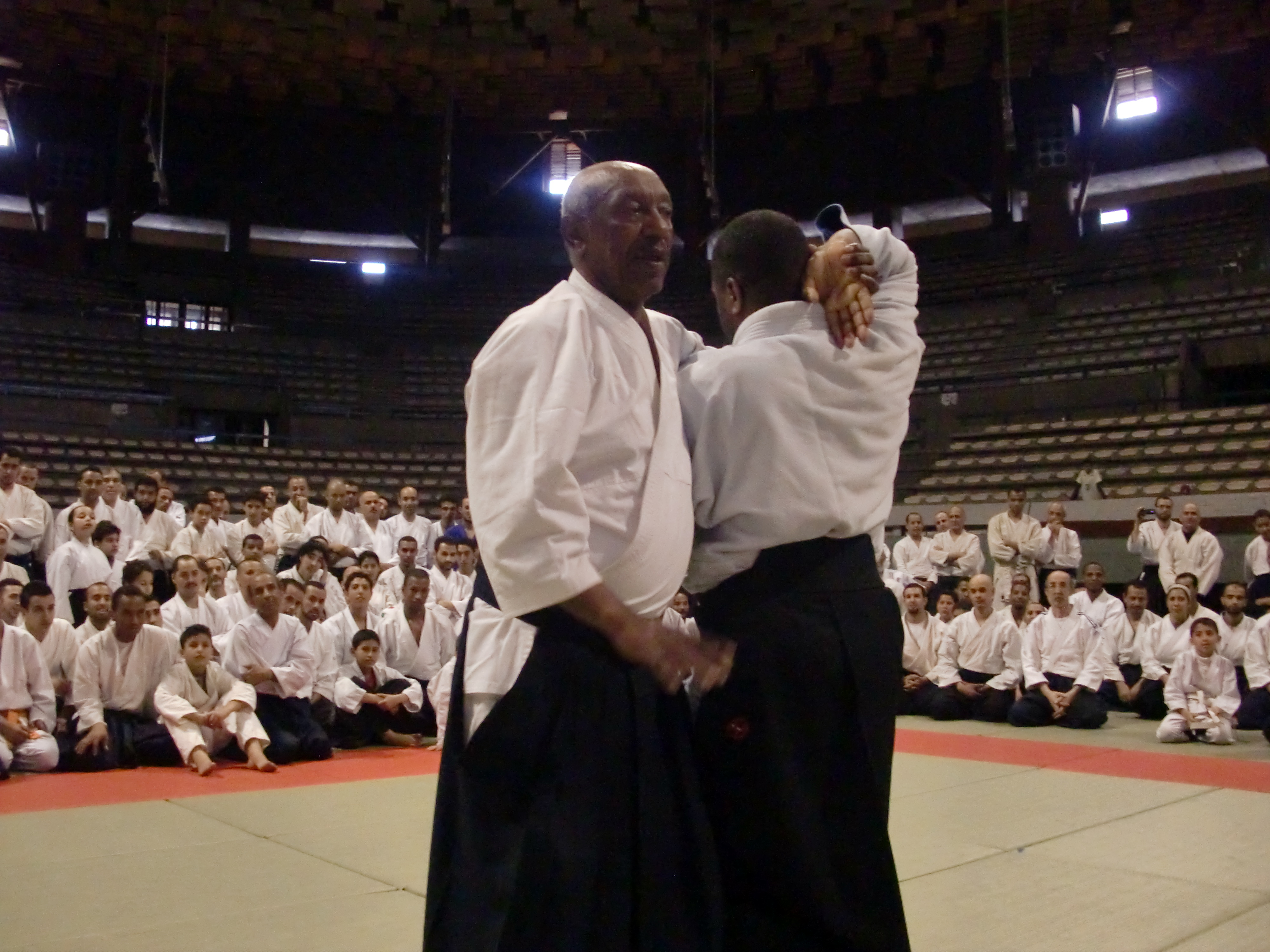 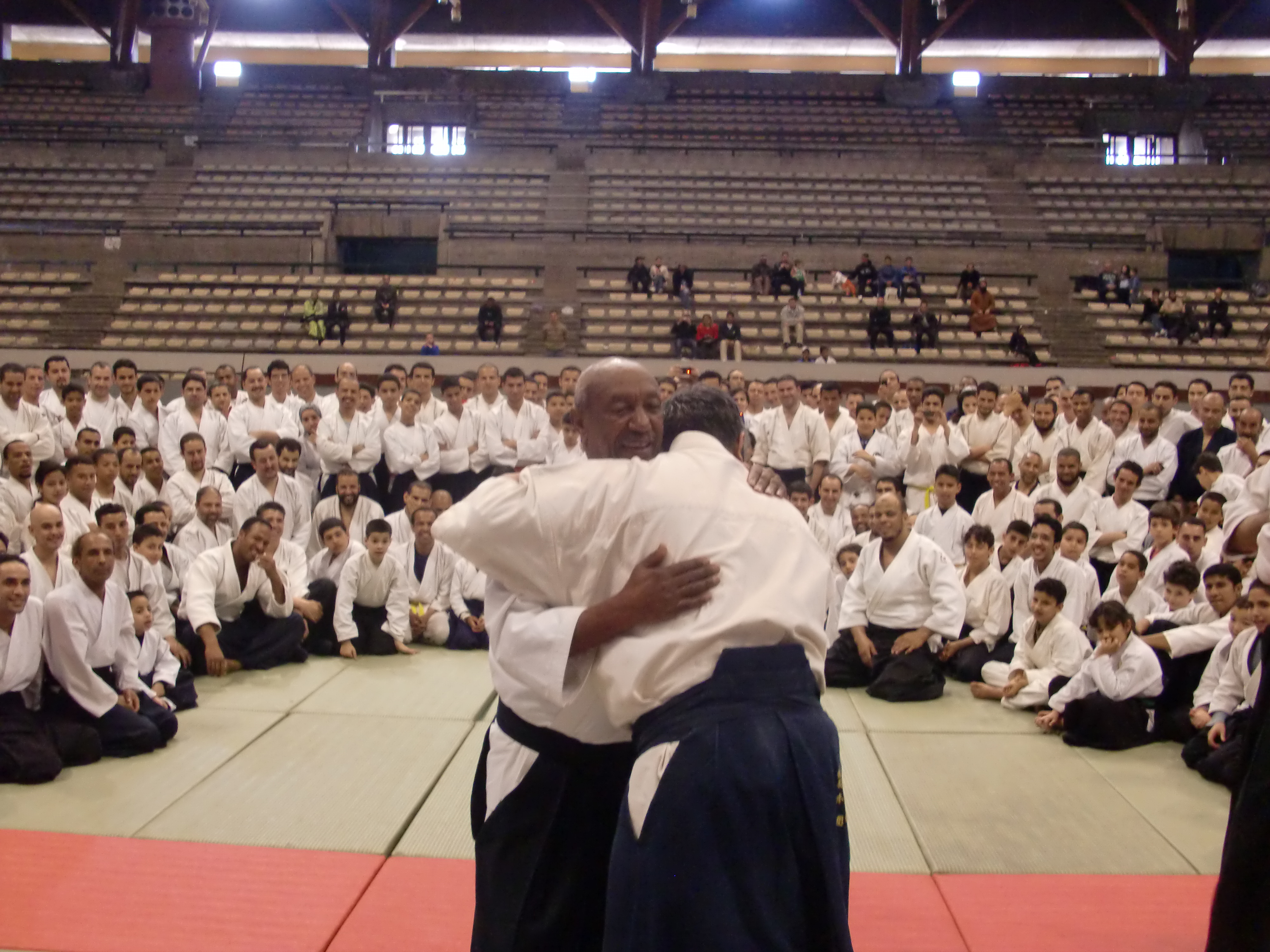 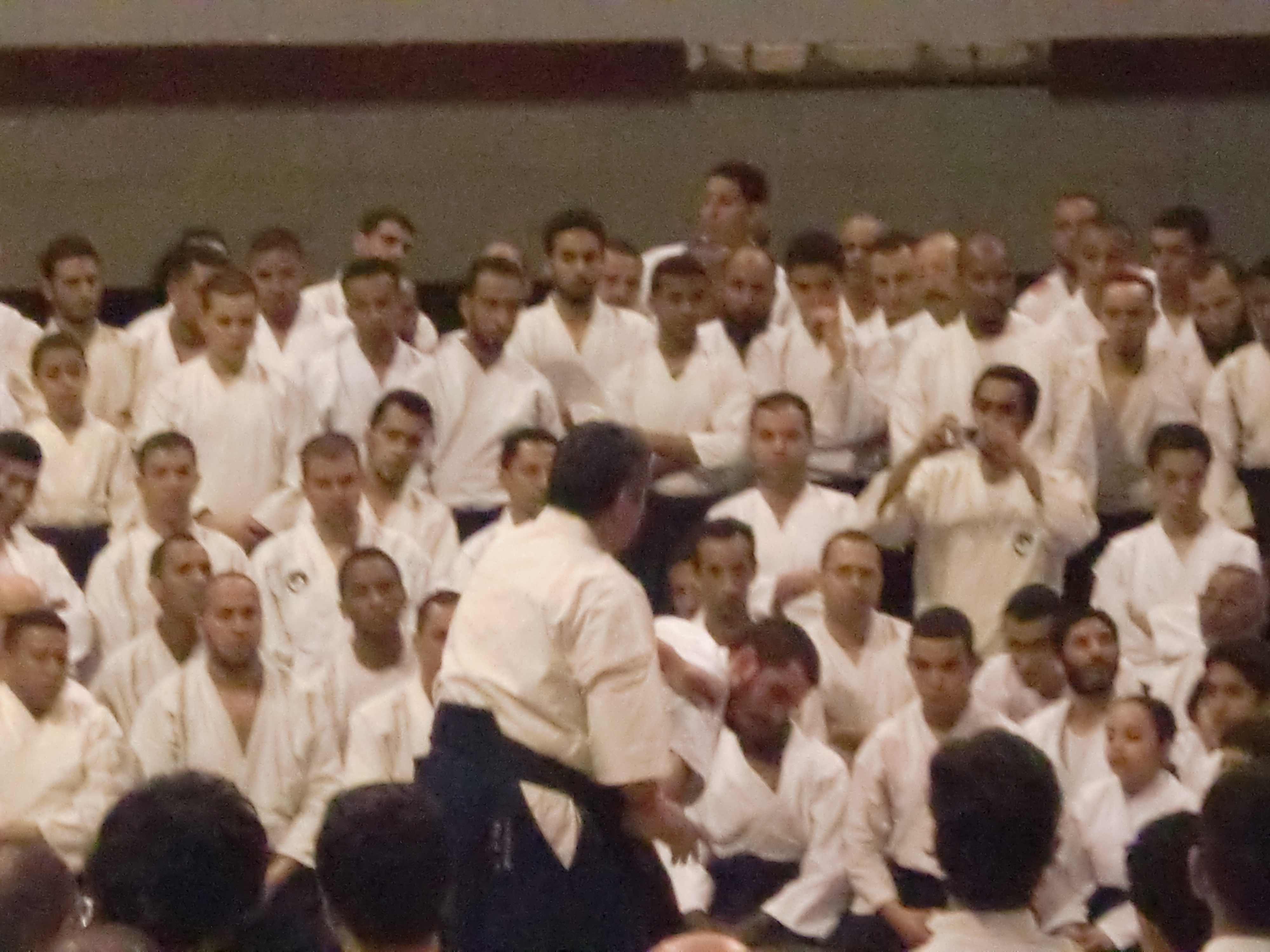 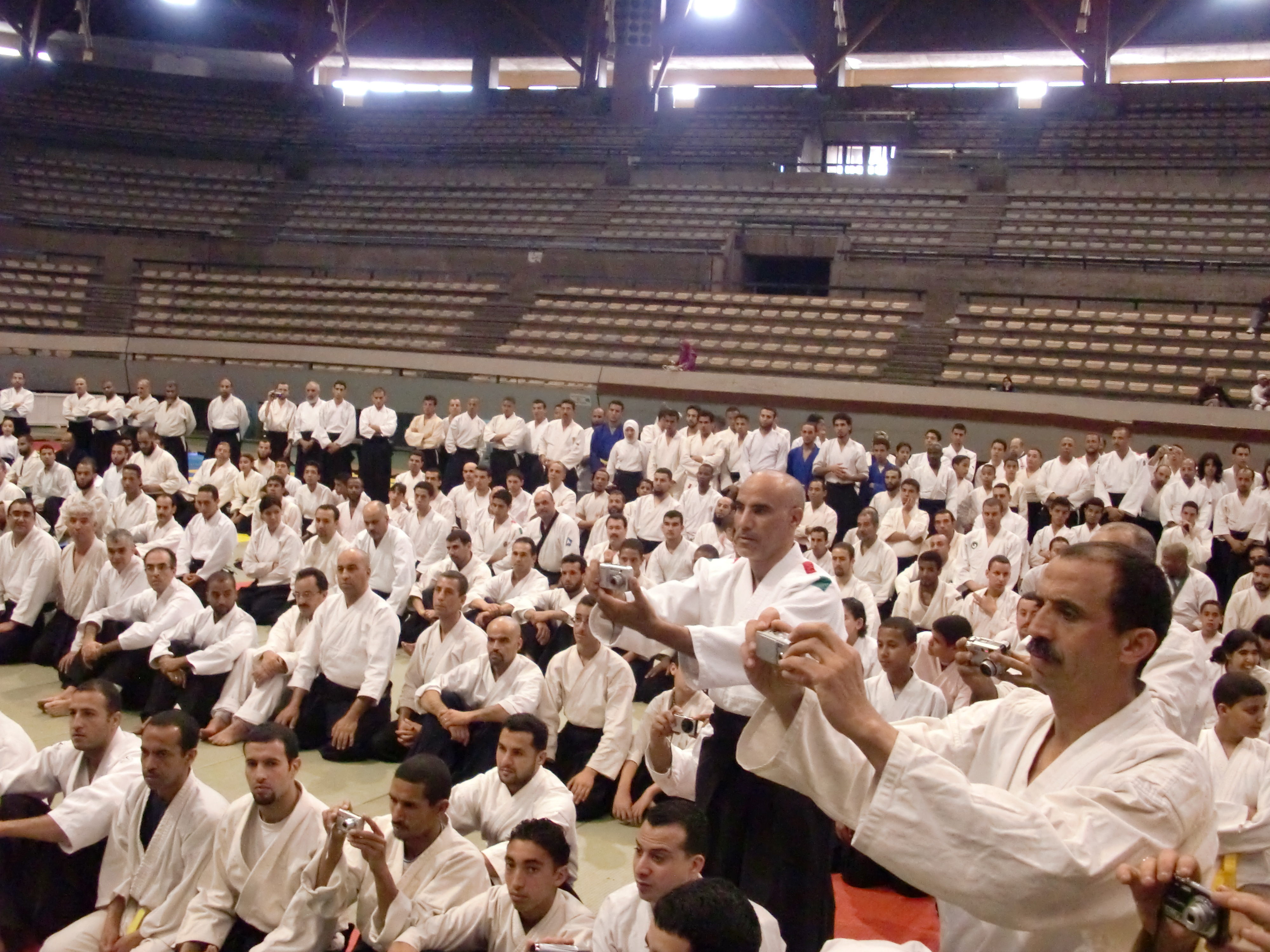 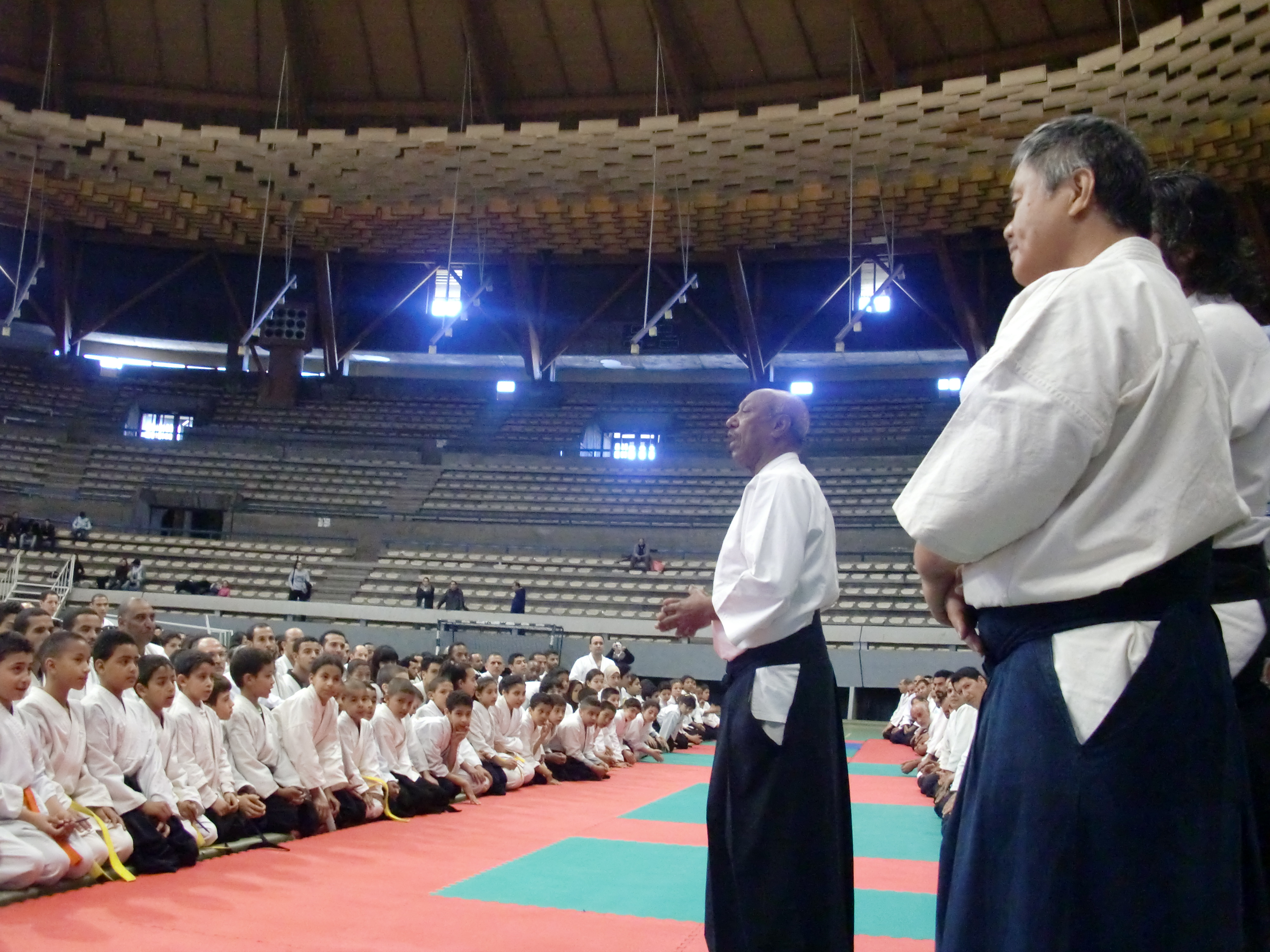 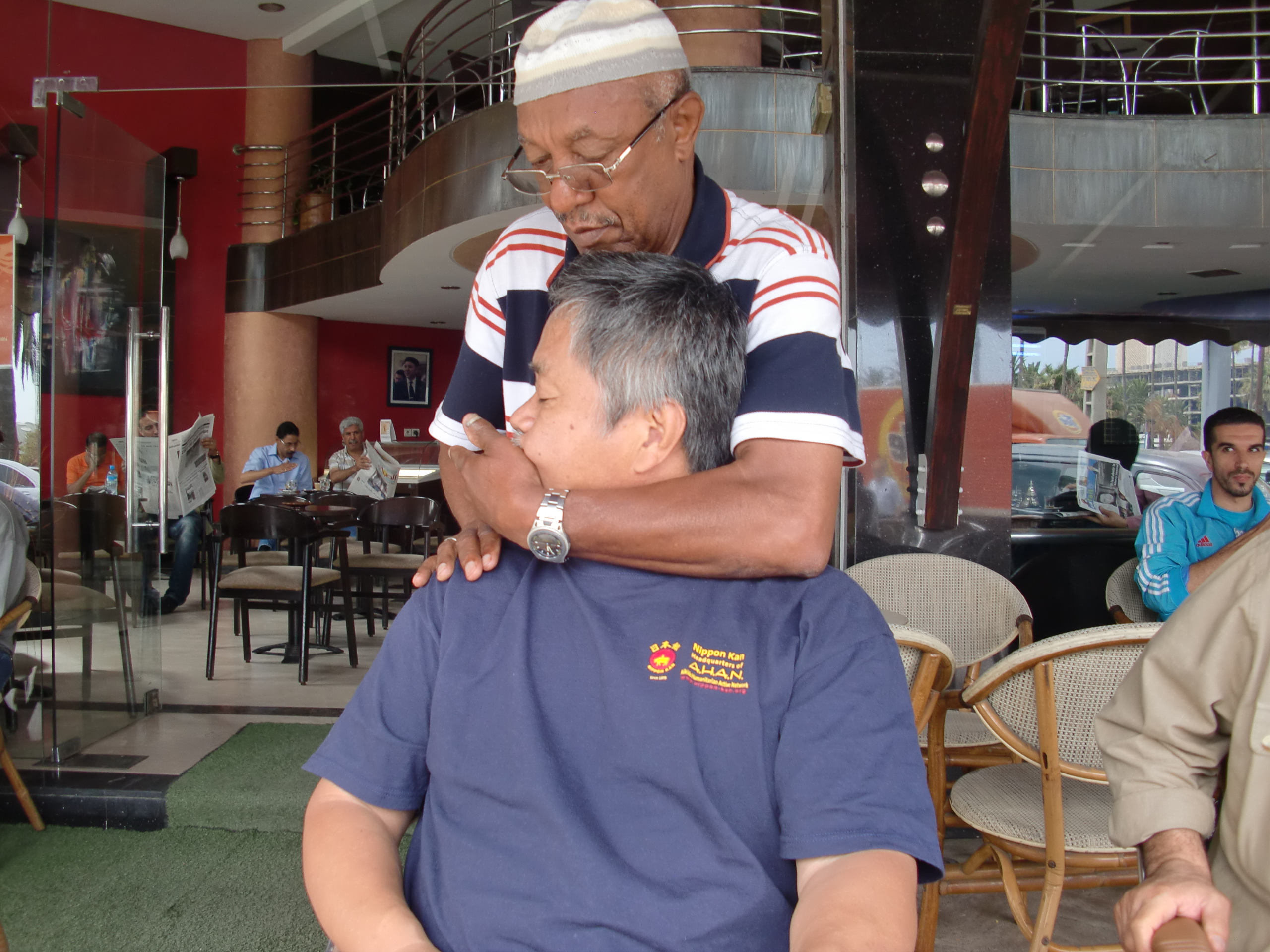 Alaoui M’barek Sensei (January 1, 1936 ~ January 21, 2014), the pioneer in the practice of Aikido in Morocco, used to gather 1,000 or so Aikidoists to organize an Aikido seminar every time I visited him.

Alaoui Sensei had never come to an airport to see me off.  It was during my 4th visit when I realized I had had it all wrong…  He was there at the airport, and he had always been at the airport for my previous visits, to see me off, but he was hiding from my sight.  His senior student said to me, “Alaoui Sensei is always like this.  It’s painful for him to have to bid farewell to his dear friends.”

He had always made certain that I was indeed welcomed to be with him.  He had known that I was the founder of an independent dojo called Nippon Kan, and he had also known that I was not affiliated with Aikikai with which Alaoui Sensei had been affiliated.  But, it was always apparent to me that he welcomed me from the bottom of his heart.  Alaoui Sensei had emphasized “the importance of family, family values and Aikido family” in an interview.  I cannot help but conjecture with certainty that his sincere respect and heart-felt hospitality he had displayed toward me every time were not only for me but also for his Japanese teachers.  I am certain that more than 1,200 direct students had followed him for his such character as a person and as a Sensei, and eventually he was overseeing over 8,000 Aikidoists in Morocco as his students became instructors to teach and lead younger generation of Aikidoists.

When he bid me farewell at an airport in 2012 was the last time I saw him, and I had a feeling at that time a few cracks were in development in the Moroccan Aikido, that had been monolithic, right in front of aging Alaoui Sensei.  Directly and indirectly, I sensed many of his senior disciples had different thoughts and intent.  And I thought to myself, “I probably would not come back…”  It was because I had come to Morocco to continue nurturing my professional relationship and my friendship with a wonderful ‘Shidōsha (i.e. leader, master instructor)’, Alaoui Sensei, and it was definitely not for any particular organization.  Especially so, I had not accepted any remuneration for transportations or for accommodations, or even for conducting a seminar; even when I was insisted to accept the payments, I asked for the entire payments to be donated to local charities.

“Will you come and visit again?” he asked.  “Yes, of course!”, I replied.   We gave each other a man hug, and it turned out to be the last time for us to see each other.  Although I have received requests from a few different groups to pay them a visit in Morocco, I have politely declined such requests to date.  I did not and still do not want to be taken advantage of in the midst of their organizational confusions.

After his demise, his organization was passed from the charismatic Aikido Sensei to the next generation, and the Dojo, which had produced many Aikido instructors, has remained as the origin of Aikido in Morocco rather quietly without having been affiliated with any other organization.

Last summer, I had a chance encounter with Alaoui Sensei’s son, Richard Sensei.  Richard Sensei had succeeded the dojo, and I learned that he was away from Morocco in Oman as an Aikido instructor.  As I was planning to travel to Europe, I decided to add a trip to visit Morocco to learn firsthand what had happened, and after 7 years, I was able to fulfill my promise of “Yes, of course.” to the Shidōsha of Aikido, whom I have respected very much, and to his family.

During my visit, I received much welcome from the family as if I were a family member, and 3 days passed so quickly as I discussed various topics non-stop with late Alaoui Sensei’s senior students who have remained with the Alaoui Dojo, late Alaoui Sensei’s family members and his friends.  What I learned from my dialogues with them was not limited to the world of Aikido in Morocco, but it was something the entire world of Aikido had better ponder.

It would cause me a great deal of sadness if what persons of the previous generations had built & nurtured in any particular place by much of their time, personal assets and hard work were to be led to follow a path so far away from the originally envisioned path by “seemingly great” Aikido instructors who are meandering in a virtual world by the influence of American Hollywood movies, etc.  An endless amount of information on Aikido is accessible through a smartphone held in our hand, and many people seem to be competing against one another to achieve higher levels of flamboyancy and intensity in their styles of Aikido.  These styles of Aikido are only akin to acrobatic stunts in action movies and stage combat movements called “tate” in Samurai movies.  While such styles of Aikido that succumb to a world of non-realistic exaggerations and imaginations are becoming more and more violent, Aikikai Hombu, as the head, i.e. “Honke”, of Aikido, must not remain sitting on their laurels by merely maintaining the number of students throughout the world while allowing an attitude of “anything goes”;  unless certain quality standards are announced, it may not be a distant future when Aikido may be removed as a category of Budo.

While not limited to the world of Aikido only these days, when anybody with fluent linguistic skills and a certain level of IT and SNS prowess were to manipulate pure and innocent people with non-fact-checked information backed by their deep pocket of money and unbalanced, biased intellect and knowledge, it’s said that it is the beginning of a new type of discrimination and social divides in the world.

In my view, it’s critical and essential for us not only to discern the sense of crisis about the aforesaid notion in our world as well as in the world of Aikido, but to remain vigilant “not to perceive it easily as something inevitably part of the passage of time”, especially when many the direct disciples of the Founder of Aikido have passed away and changes from one generation to another are happening with the emergence of a group of SNS-based Sensei, and especially so, it’s also important not only to contemplate where the origin, where the source, was but also to look back the paths the previous generations had followed and cultivated and tread back on the paths as necessary.

During my visit in Morocco, I was once again welcomed by the Alaoui family as well as late Alaoui Sensei’s senior students, and my sincere gratitude goes to every one of them.  I am especially grateful that Zahra-san, one of late Alaoui Sensei’s children, for all the stories that were shared with me during my stay.  My sincere gratitude from the bottom of my heart to them!

Mint tea was in season and the taste of mint tea was as wonderful as I remember from 7 years ago, although the state of Aikido in Morocco has drastically changed since 7 years ago.