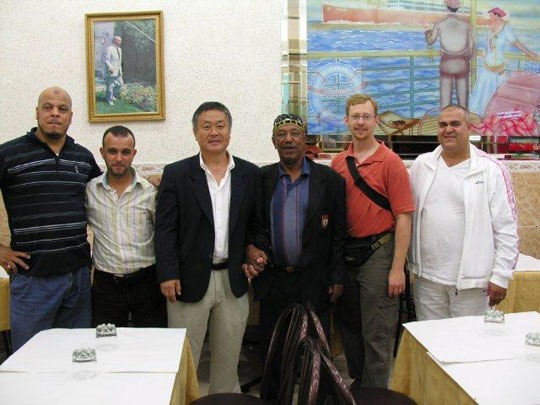 Alaoui M’barek Sensei and Homma Kancho with board of directors.

My name is Bryon, and I traveled from Nippon Kan Headquarters in Denver to Morocco to serve as Homma Kancho’s assistant. We had come at the invitation of Morocco Aikidoka and I met Homma Kancho at the airport in Casa Blanca.

The invitation we had received was from a senior Aikidoka that had been part of the entourage we had practiced with on Homma Kancho’s first visit to Morocco; he was registered in Nippon Kan Headquarter records. After much email correspondence (mostly in French) to confirm schedules, we were on our way to Casa Blanca. Almost immediately after we arrived and were greeted by our hosts, Homma Kancho said to me, “Something is wrong”.

In 1956, M’barek Alaoui Sensei began his teaching of Aikido in Morocco and at the time of Homma Kancho’s last visit had built a nationwide organization in Morocco of over 3000 members.

Homma Kancho naturally began to wonder why we had not been able to meet with Alaoui Sensei upon our arrival. At first we were told that Alaoui Sensei was sick and in the hospital so we would not be able to meet with him on this visit. Homma Kancho thought for a moment and commented, “On a recent trip to Abu Dhabi UA, I was talking with the instructor there who had told me that he had just met with Alaoui Sensei a week ago and said that he was in fine health. Something is wrong with this information.”

It was not long before we were to discover that Homma Kancho’s instincts had been correct. What has been happening in many parts of the world had been happening in Morocco too. The splintering of Aikido organizations is becoming an all too familiar world-wide phenomenon.

Our host dojo it became apparent, had split from Alaoui Sensei’s organization and had formed a completely different organization of their own. Homma Kancho, even though he sensed what was happening, said nothing to our host and continued to fulfill his teaching commitments in dojos both in Casa Blanca and Marrakech. Homma Kancho said, “Even though this situation is not what was proposed to us, if I stop now it is not fair to the students who have come together for these seminars. The students are not aware of organizational politics, and should not be the ones to be affected by this. Internal politics are struggles between the leaders of organizations; innocent students should not be the casualties.

Homma Kancho taught as scheduled and said his goodbyes… 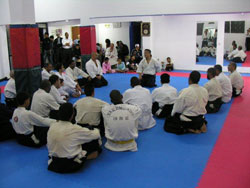 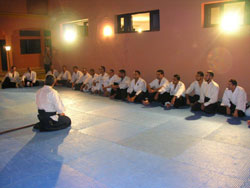 Politics are not students responsibility, Kancho teaches the spirit of Budo.

With only twenty four hours before our plane was scheduled to depart Morocco, we set out to search for Alaoui Sensei ourselves in Casa Blanca. With the language differences and our unfamiliarity with the city, this seemed like a daunting task indeed. We went to the medina (the old walled city within Casa Blanca whose winding twisted labyrinth of streets were originally built as a form of protection to confuse enemy attackers). Without a guide, we could not have found our way through the medina and our chances of finding Alaoui M’barek Sensei by ourselves we figured was about 1 in 1000.

We soon found that the medina is a very lively and close knit community and word got around in the medina faster than any internet would ever to be able to! 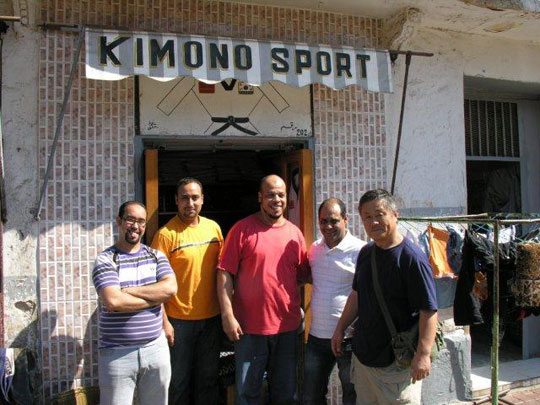 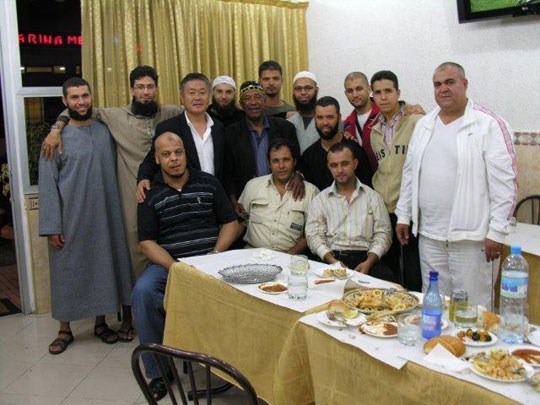 Many joined in the reunion celebration.

We started our search in an internet café where we tried to look up contact information on Alaoui Sensei. It was not long before someone asked who we were trying to find, and within a few minutes, the word had spread about our mission in the medina. Moments later, someone arrived that said they could guide us to the residence of a senior student of Alaoui Sensei. Thankful for the help, we set out on foot and were taken to the student’s home.

We were happy to hear that Alaoui Sensei was not sick and in the hospital as we had been told. He was in Marrakech, a four hour drive from Casa Blanca with his senior staff, where they were checking locations for upcoming seminar events. Our new found friend was able to contact Alaoui Sensei in Marrakech. Upon hearing the news that Homma Kancho was in Casa Blanca and looking for them, Alaoui Sensei and his staff cancelled the rest of their overnight plans and headed back to Casa Blanca.

It had only been four years, but when Homma Kancho and Alaoui Sensei finally met, it seemed like the meeting of long time great friends. We had dinner with Alaoui Sensei and his senior board of directors and Homma Kancho heard all about the big changes that had been taking place in the structure of Aikido organizations in Morocco over the last four years.

Homma Kancho spoke to the group, “I have heard this story before. It seems the cause of many of the problems here started with the introduction of Japanese JICA (Japan International Cooperation Agency) overseas volunteer Aikido instructors to Morocco. Other JICA instructors have caused problems in many parts of world. Not all of them have been disruptive of course, some have contributed positively to local communities but by in large, in my own personal experience, I have witnessed more problems with them than not. There is a fifty year history of the practice of Aikido in Morocco and when I was here four years about there were over 350 dojos and groups united in practice. There was a solid organizational structure in place here in Morocco. I do not know why JICA instructors are sent from Japan into countries with stable, developed Aikido organizational structures; they seem to cause disruption, not development.

For example, two years ago in Ankara, Turkey, a local Aikido instructor opened a dojo with a JICA instructor almost right across the street from an existing dojo, seemingly deliberately. Ignoring existing Turkish Aikido organizations, they began their own direct Dan promotion system with Hombu Dojo in Tokyo. I counted the number of steps myself from the existing local dojo to the new JICA dojo; it was 190 steps. This was very disappointing to me.

For a visiting JICA Instructor to ignore local history and organization and claim superiority because they are “Japanese” is akin to invading a country waving Japanese flags. The people in Japan pay taxes that are used to support JICA programs in other countries. If the result of these programs is bitterness and disruption because of the reckless actions of a Japanese JICA instructor, then the money, time and energy used for these programs serves only to confirm a negative image of Japanese people in the world.” 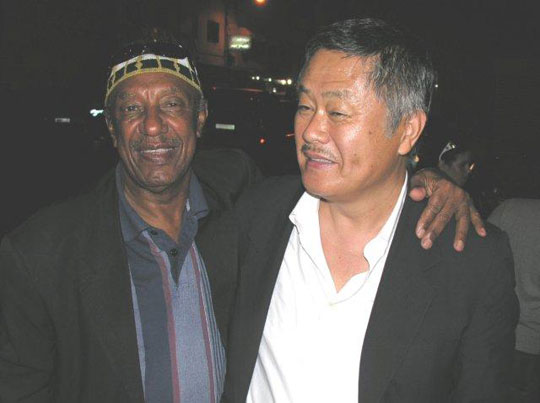 Farewells, with a promise to meet again next year.

Alaoui Sensei and accompanying board members bid us a fond farewell, making plans for a visit next year in 2010 for an Arab-Africa Aikido Seminar Summit. Homma Kancho enthusiastically promised to attend.