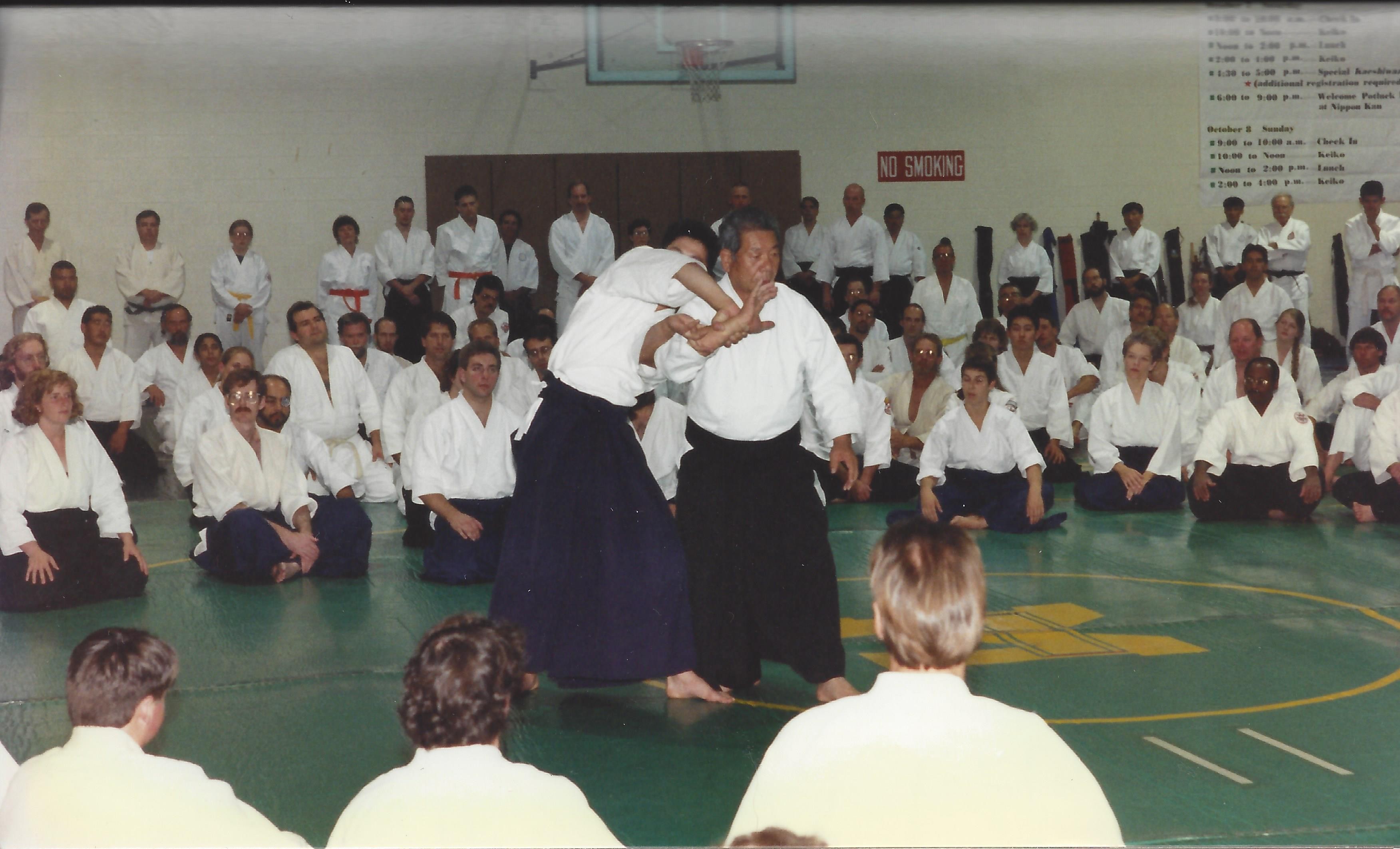 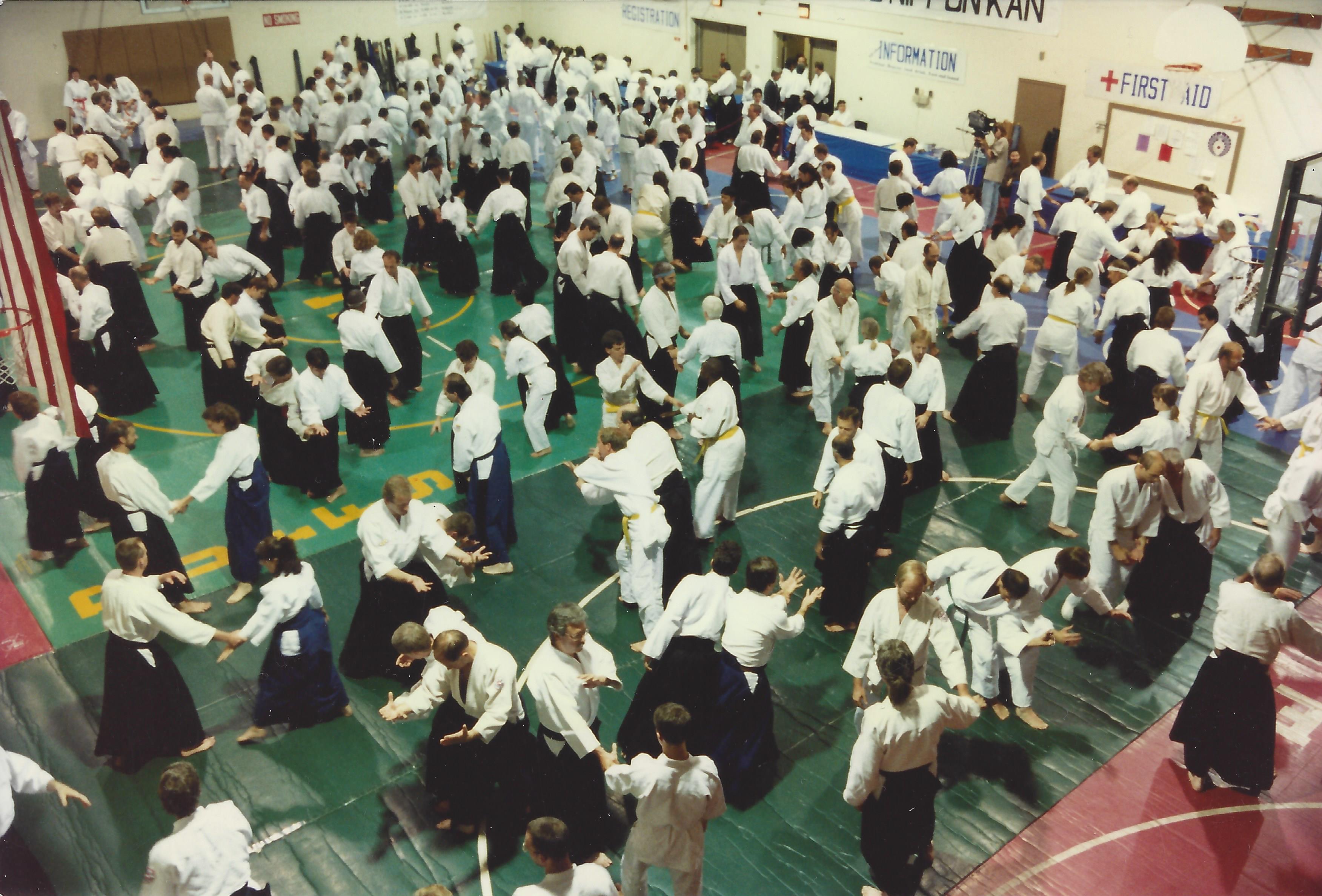 We just finished an Aikido Seminar with much success the day before, and late MorihiroSaito Shihan (“Morihiro Shihan”, hereafter) and we were going to leave for a hot spring in the Rocky Mountains in the morning.

​Morihiro Shihan woke up at 7:00AM as usual, showed up in the living room and came into the kitchen…  He grabbed two glasses out of a cupboard and poured low fat milk into the glasses while saying to me, “My doctor tells me to watch my weight.” about low fat milk.  I was thinking in my mind but dared not to let it come out of my mouth, “… but that’s not the reason that you are pouring milk into the glasses… is it!?” 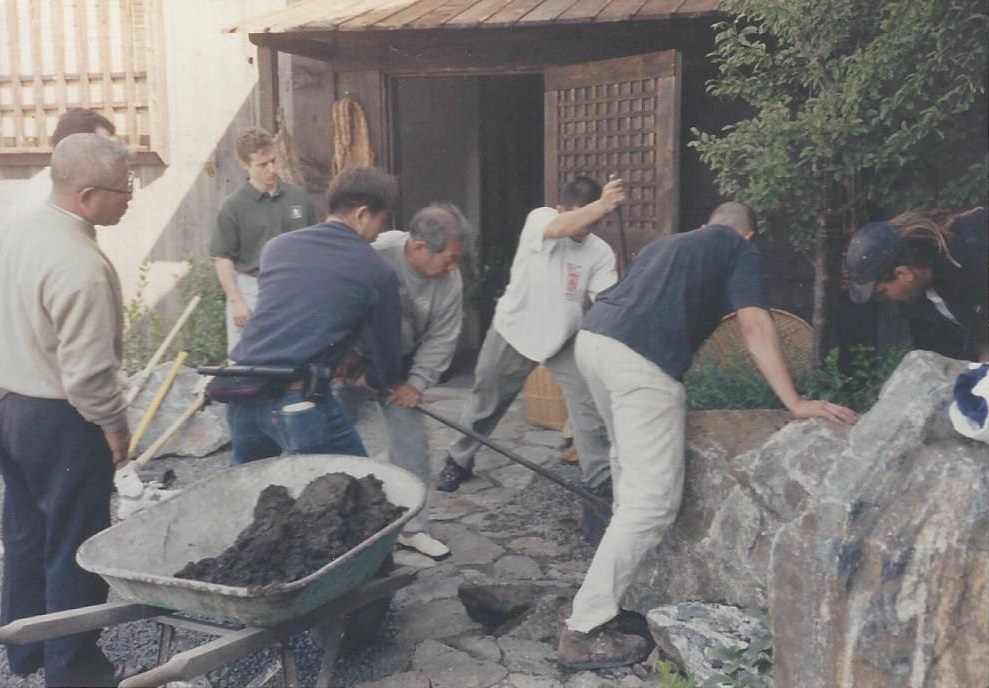 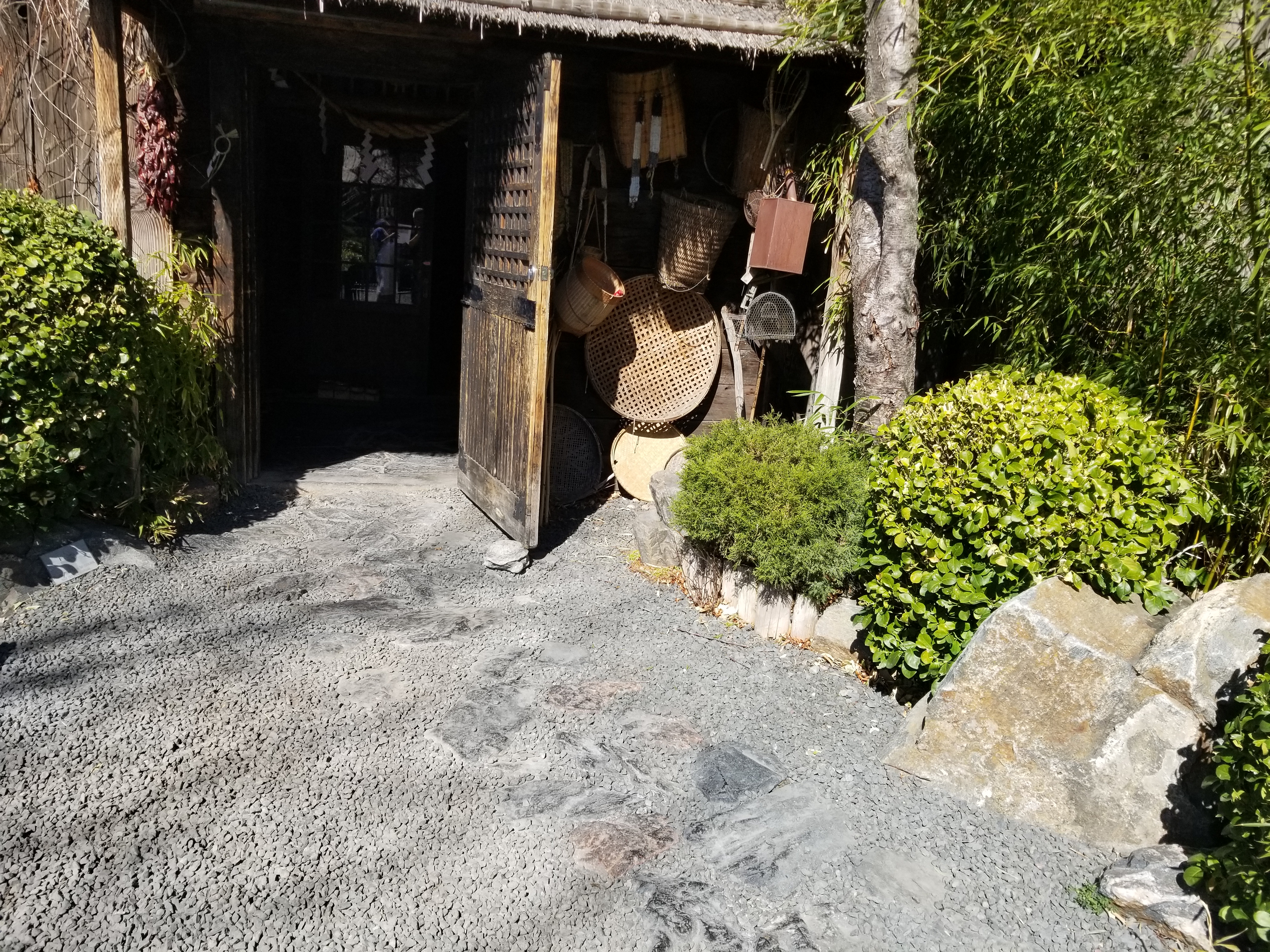 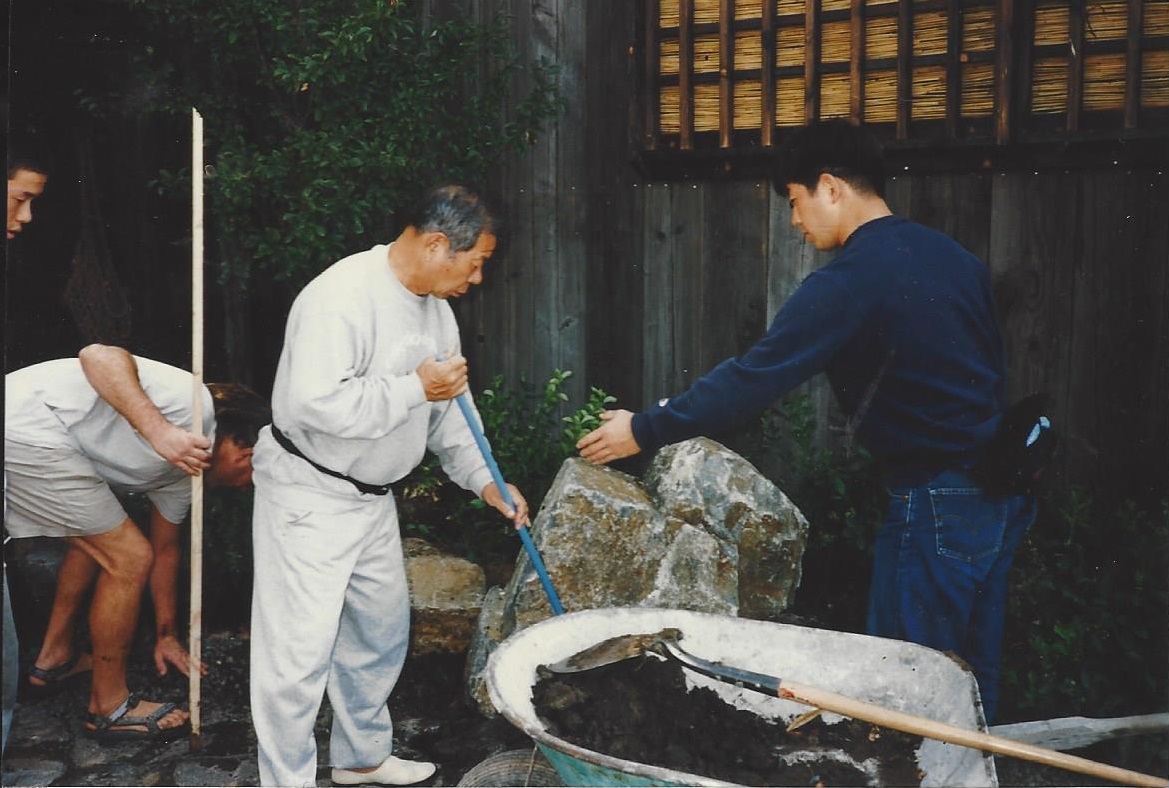 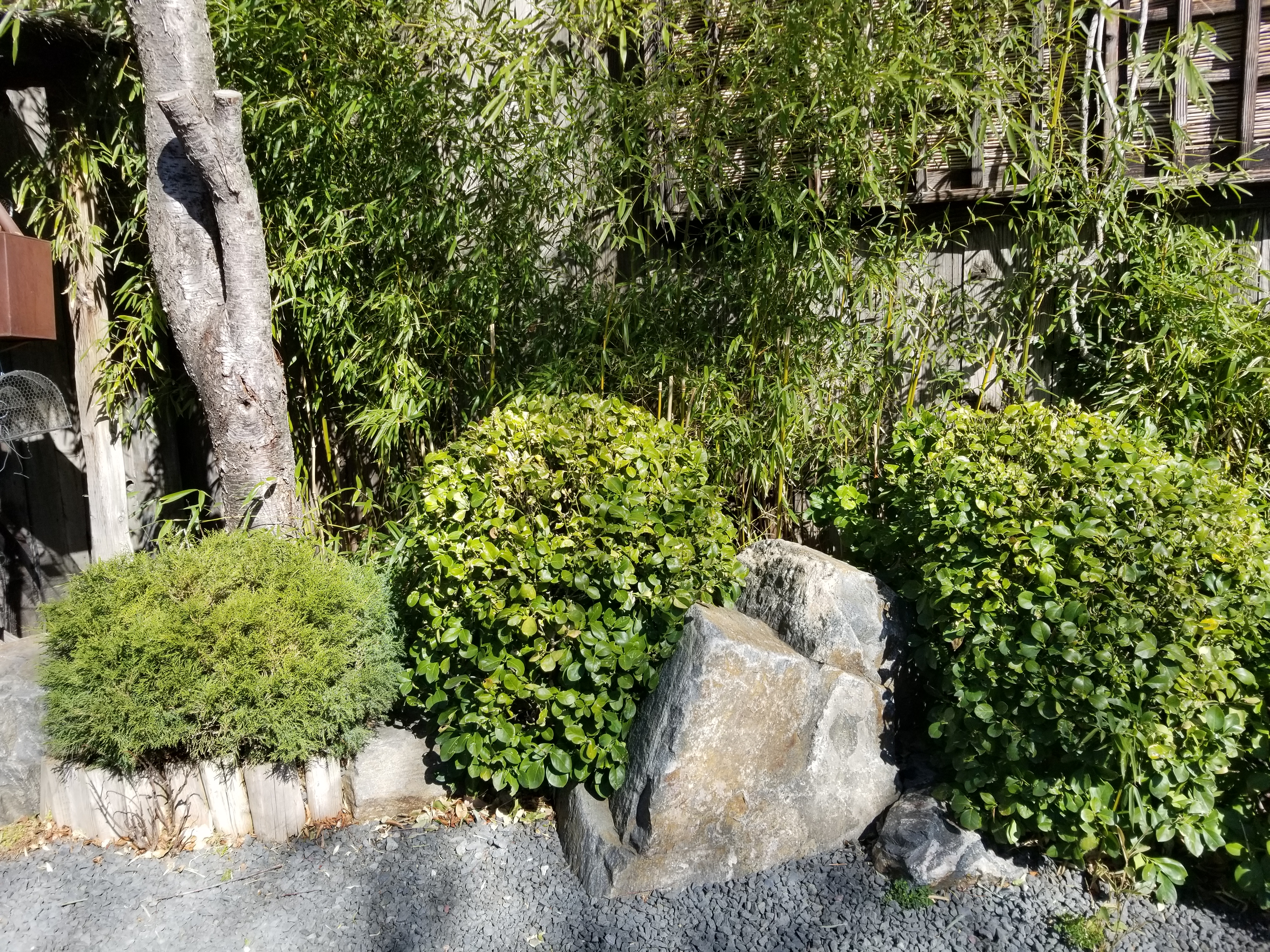 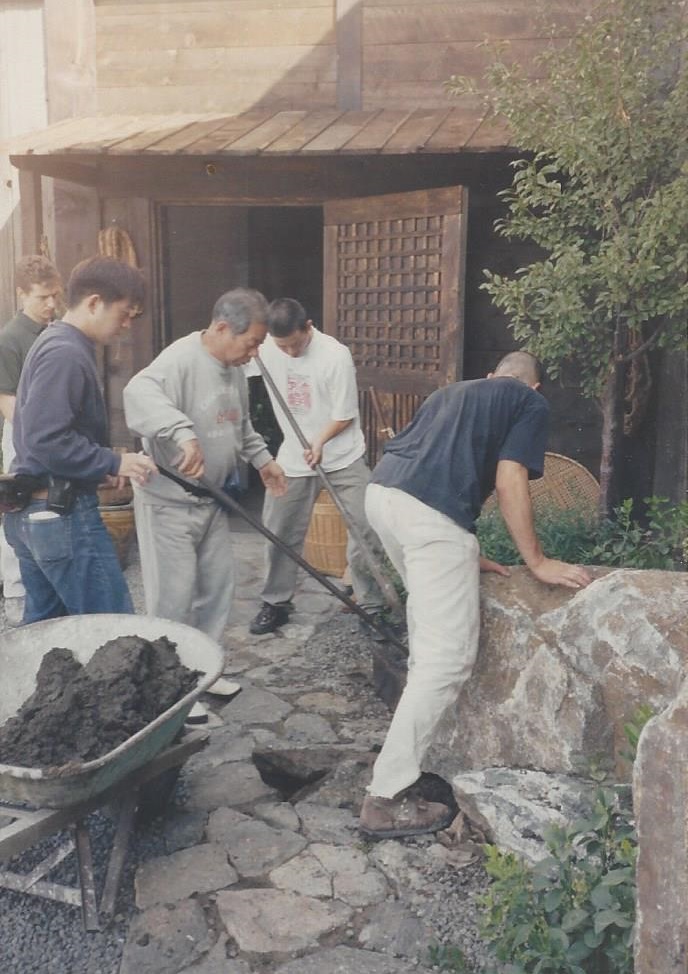 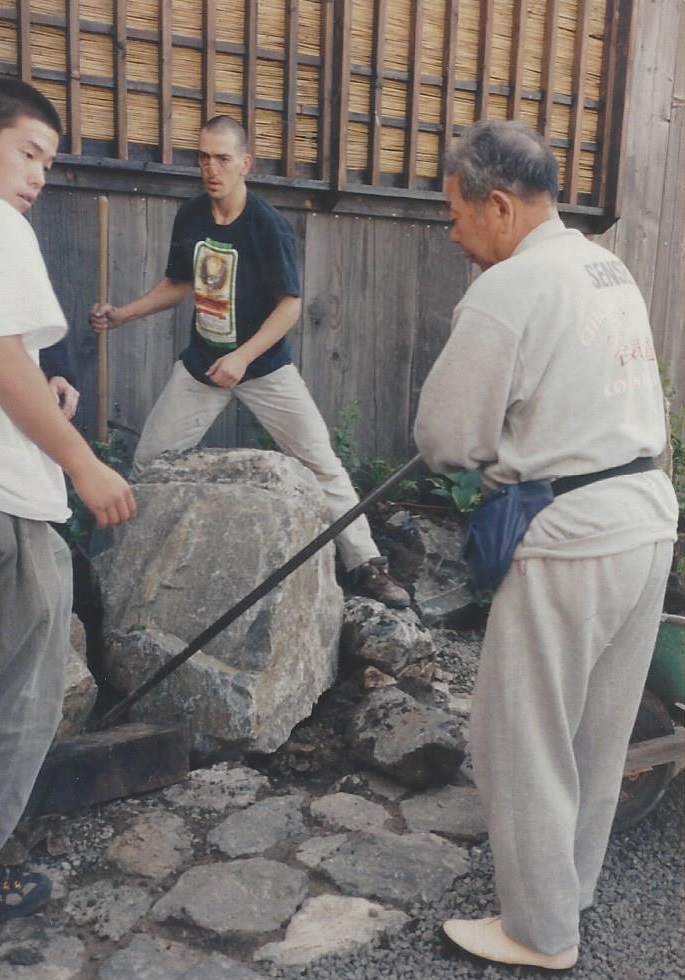 ​He then poured whiskey leftover from the night before into the glasses, (and this is the good part…) and suggested late Shigeru Kawabe Shihan (“Kawabe Shihan”, hereafter), then regional director for Akita prefecture, who had accompanied MorihiroShihan to the Aikido Seminar in Denver, to drink it up.  Of course, Kawabe Shihan had to oblige… THEN, Morihiro Shihan declared with much determination, “Now, I would have to follow your suit!” in Japanese with Iwama accent.  It was “a cute, peaceful moment” in the early morning hours with Morihiro Shihan.

​Although we were going to relax at a hot spring that day, Morihiro Shihansurprised us by saying, “Let’s go work on Homma kun’s garden!” as he finished his glass of “milk”.

​He did “Tentsuki exercise (天付き運動)” (Note: it’s a whole-body exercise where you lower your hip and as you straighten your knees and the waist, you are stretching both arms upward.) a few times before getting into a van and said, “I cannot go back to Japan if I don’t work on the garden!”  Not only were we impressed by his determination and energy, we also didn’t know what to say or what to expect…

​Immediately after we got to the DOMO garden construction site, he didn’t waste time to start telling us what to do!  However, it was we against large boulders for the garden, and it was not an easy feat at all to move them even a foot in any direction.  Besides, the bottom 1/3 of most of the boulders had been buried into the ground per the best practice of positioning stones in a Japanese garden.  While we continued struggling to conquer the boulders even with shovels and tamping & digging bars, Morihiro Shihan kept saying words of wisdom like, “Each boulder has a face, and its head should be the flat side.”, with his tone of voice rising…

​He then said, “How many of you have to keep working on such lightweight rocks for how much longer!?” and jumped in among us to start moving the rocks to where he had envisioned them to be…  We were flabbergasted again because only a few moments ago, those lightweight rocks were big immovable heavyweight boulders…!!!  (OMG!)

​He then said, “You must talk with the rocks.  You must listen to them to see how and where they want to be moved.” with a hint of satisfaction in his voice.  It was as if he just shared with us an essential point (極意, Gokui) of Aikido. 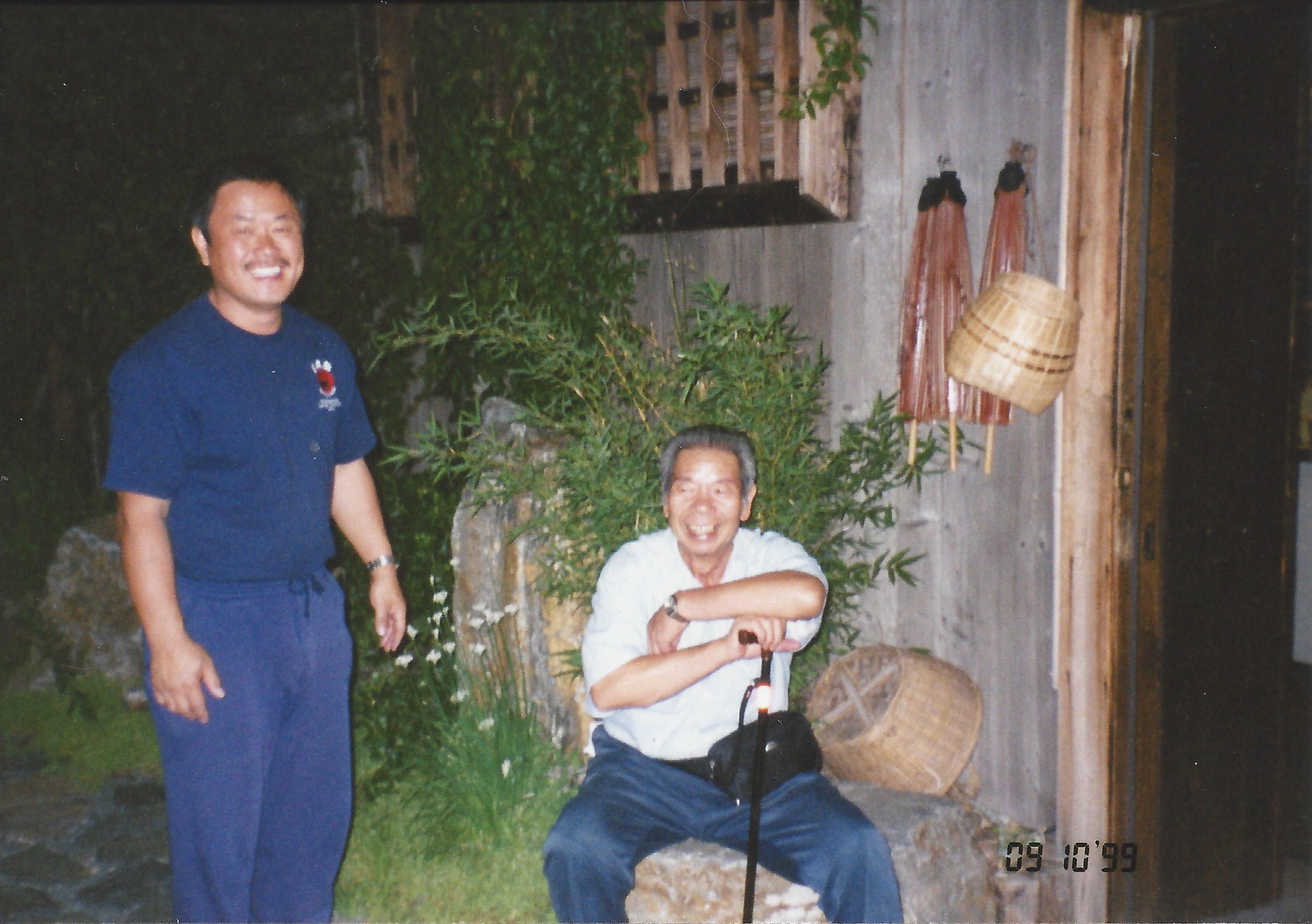 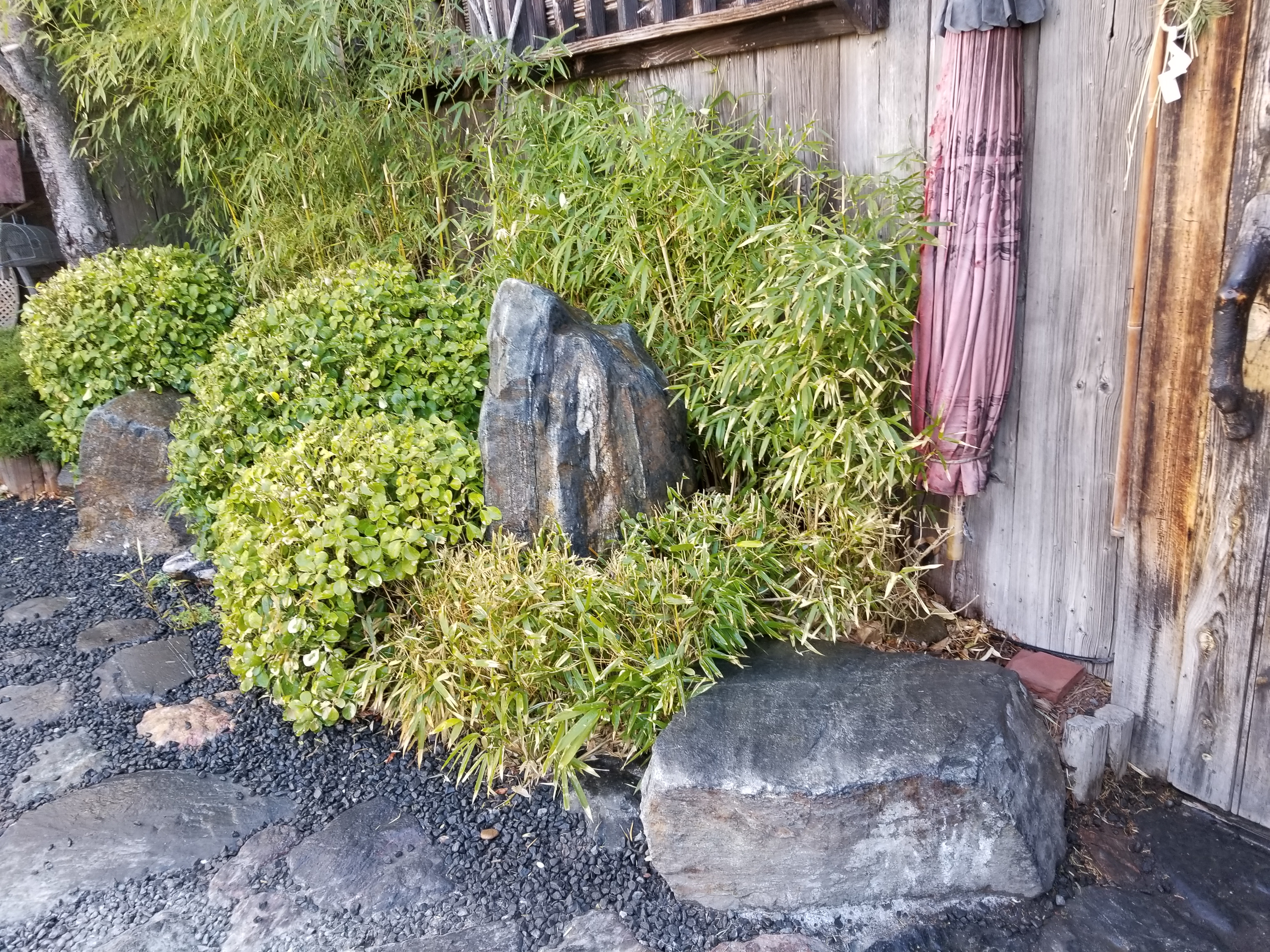 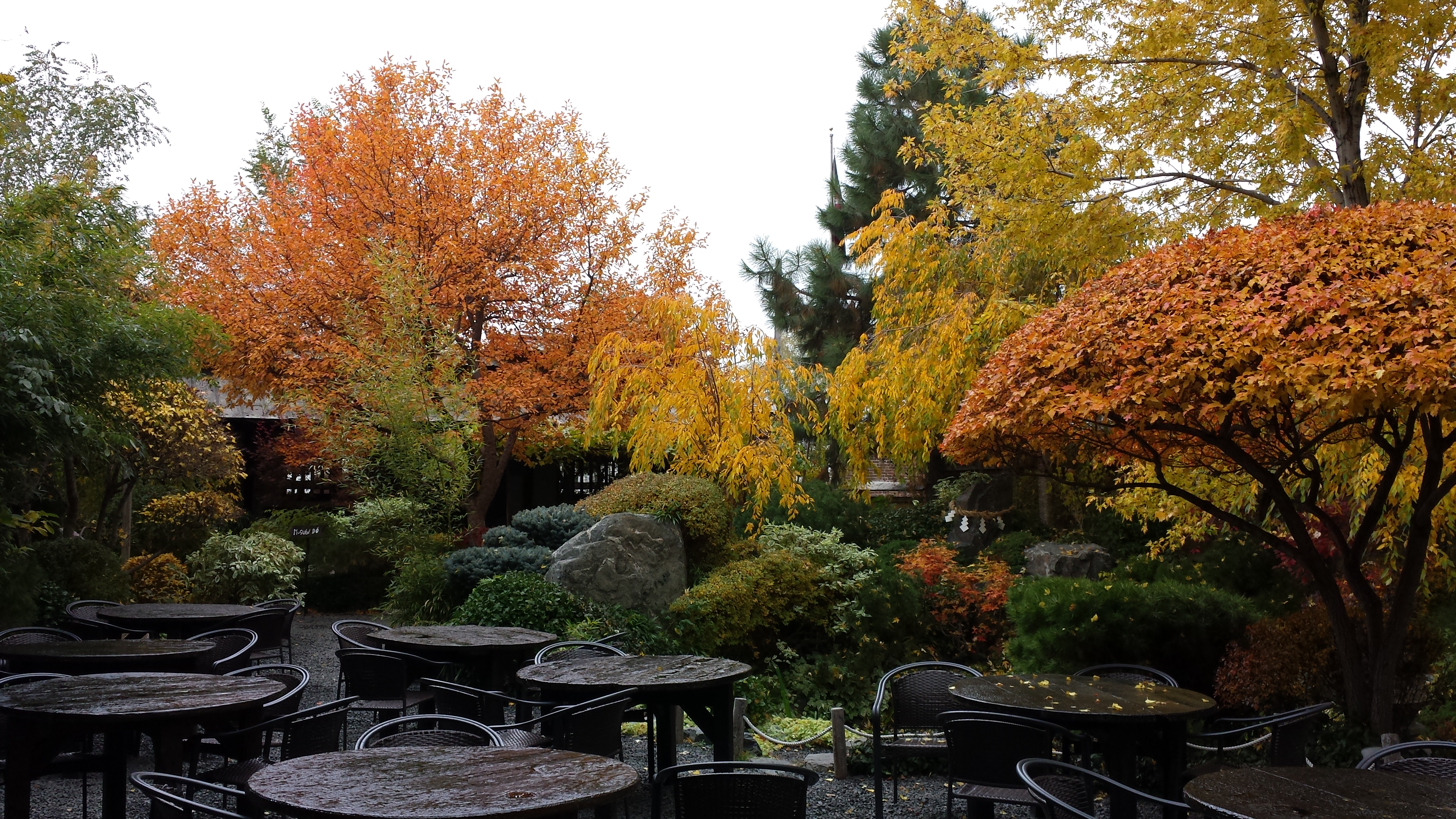 ​After the work was done, he sat down on one of the rocks he had helped to be where it had wanted to be, and said, “Let’s get some cold refreshments!”  When an uchideshi who obviously didn’t read between the lines brought a glass of ice water, he added, “something with a little bit more color…”  When he finished ice cold beer, he quietly yet confidently said, “This will be a wonderful garden in about 10 years…”

​It’s been more than 22 years since then, and Nippon Kan’s Garden has not only enjoyed various media exposures, but received many awards.  DOMO Restaurant enjoys serving customers in the Garden, and the restaurant with the Garden has been a landmark-like place, highly well-known for its fine Japanese country-style cuisines.

​One of precious words of wisdom Morihiro Shihan had given me was “One must not teach Aikido while relying one’s livelihood on it.”.  I founded DOMO Restaurant while keeping the words of wisdom firmly in my mind.

​It’s been 17 years since the demise of Morihiro Shihan.  Not only had he left his legacy throughout the world as an Aikido-ka (Aikidoist), he had raised many an Aikido instructor around the world.  We should especially be reminded that the Bokken and Jo movements Morihiro Shihan had composed after having dedicated decades of his life to the teachings of the Founder of Aikido have been practiced as a foundation of Aikido for many an Aikido practitioner in the world.

​He had maintained a high level of dedication and commitment to the Founder of Aikido for decades.  Perhaps no word can explain accurately how dedicated MorihiroShihan had been to the Founder of Aikido, except for this phrase that was well-known in Iwama back then, “Napoléon from France napped on a horse for an hour.  Mo-chan(Morihiro Shihan’s nickname) from Iwama naps for half an hour only.”

​We are blessed with what Morihiro Shihan had obtained after a series of relentless efforts and struggles.

​After his demise, his son Hitohira Jukucho decided after deep pondering and much soul-searching to part ways with Aikikai and soon after founded Shinshin AikiShurenkai.

​There are many former students of Morihiro Shihan who decided to stay with Aikikai, and it was and still is all up to individual choice.  Yet at the same time, as the 17-year anniversary of the passing of Morihiro Shihan nears, it may be a good opportunity for us to have a moment of introspection as a Budō-ka (武道家). 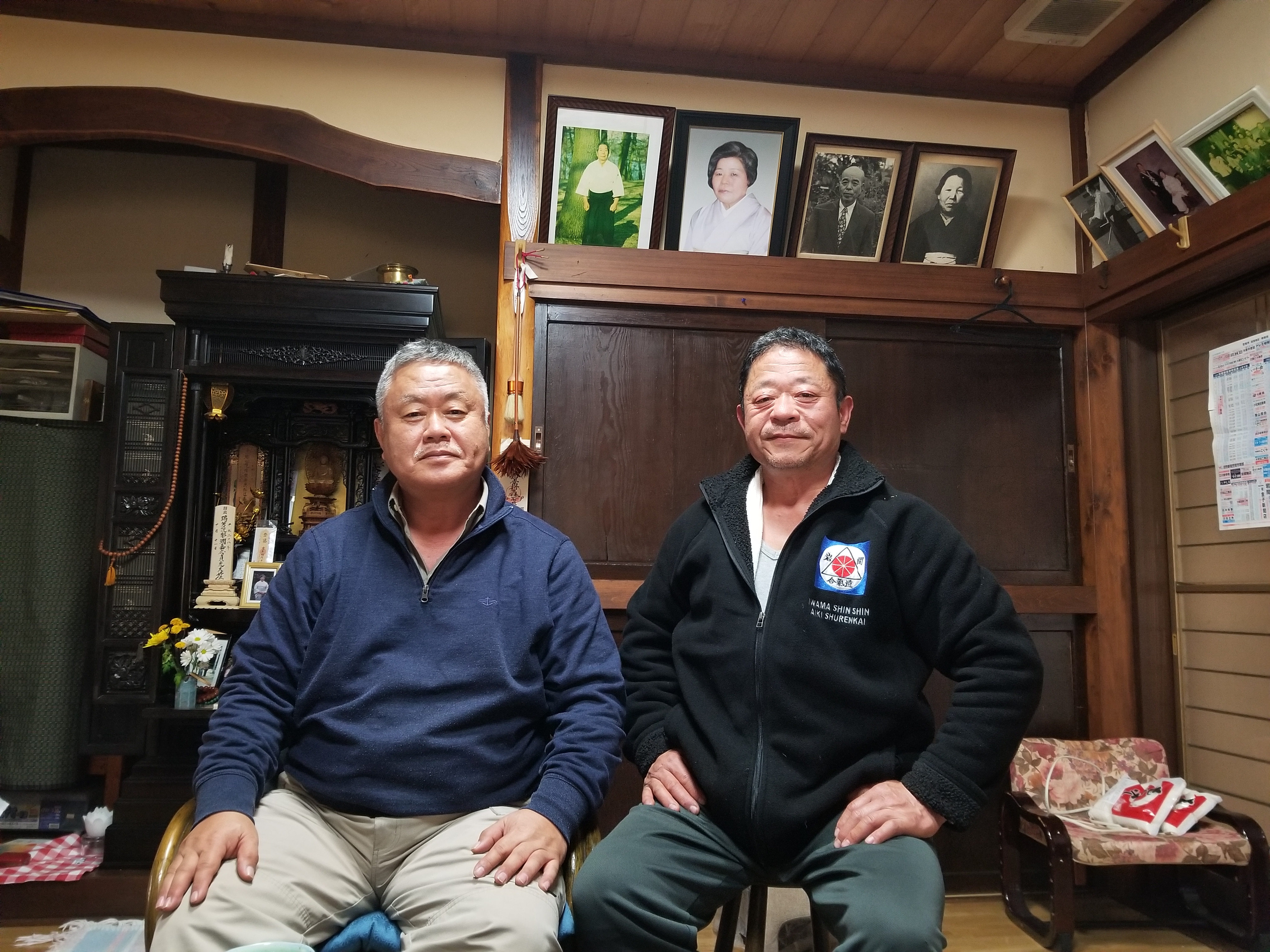 Author and Hitohira Jukucho at Iwama on February 23, 2018

​Many former disciples of Morihiro Shihan must be around the age of 60, and it may not be a bad idea to reflect upon the journey they have taken as an Aikido-ka and ponder whether we have been alone in this journey and/or by whom we have been guided in our journey as an Aikido-ka and as a human being…  I must say that I may know a few who have not been hit by ‘cold sake’ yet…

​However, one decided to stay with Aikikai or to start a new journey with ShinshinAiki Shurenkai, a Bujin (武人; a translator’s note: in this case, it’s a synonym to Budō-ka (武道家).) must not forget who their master was.

​The 17th anniversary ceremony of Morihiro Shihan’s departure from our world will be held in the morning hours on May 6th, sponsored by the Saito Family in Iwama.  Sending a bundle of flowers to commemorate the occasion could be one of ways to show one’s appreciation to his/her master as a Budō-ka (武道家) Spirit.