A photo album for the tour can be found in the accompanying article Sixteen Drummers from Matsukawa. Written by Gaku Homma, Nippon Kan Kancho link here. 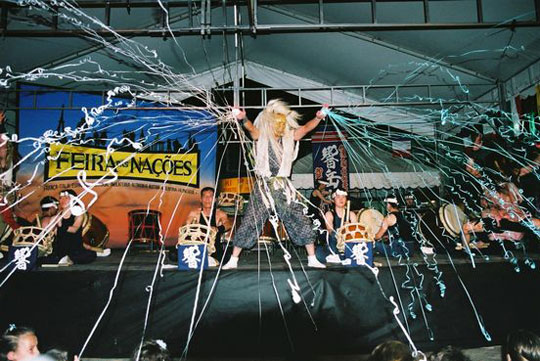 One of Nippon Kan AHAN General Headquarters most interesting and successful sponsored activities in 2005 was the Matsukawa Taiko Drummers World Tour 2005 held in Rio de Janeiro, Brazil. Over 2000 people in Brazil were thrilled and delighted by the drummers in the series of concerts they played October 19-27, 2005.

The Matsukawa Kyogaku Taiko Drummers are a world-class drumming troupe that lives in the village of Matsukawa high in the mountainous Nagano Prefecture of Japan. The drummers have performed all over the world, including six concert tours in the United States. Last year, Nippon Kan AHAN General Headquarters sponsored a series of concerts held in Denver, Colorado to raise awareness and funds for AHAN’s computer redistribution program to Mongolia and other countries in need.

The Matsukawa drummers know of AHAN’s philosophy of community service and of AHAN’s many humanitarian and cultural awareness projects world-wide. The group readily agreed to join Nippon Kan AHAN General Headquarters in supporting an awareness raising campaign for AHAN Rio de Janeiro in Brazil. This was the main focus of this tour and to that end; the tour was an overwhelming success. 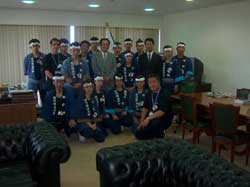 After finally landing in Rio after two days of travel from Japan, the drummers paid a visit to the Consul General of Japan at Rio de Janeiro, Mr. Takeshi Kamitani. The Consul General provided a tremendous amount of support in assisting the drummers with their travel documentation and the requirements for entry into Brazil. The drummer’s leader, Mr Eitaro Chino thanked the Consul General officially for the group. Mr. Kamitani replied with a wish for success for the days of concerts to come.

With this official blessing the drummers headed for Copacabana Beach and the Baden Powell Theater where the first concert of the series was to be held. On what was to be a whirl-wind week of activity, the next concerts were held at the Japanese Brazilian Center (Nikkei Kaikan). This concert was followed by concerts at the Moacir Bastos University followed by two concerts in the city of Buzios, a well known sea-side resort outside of Rio. Five concerts in all were held, each playing to crowds that were thrilled and awed by the drummer’s powerful performances. The drummers deeply touched the hearts and souls of the Brazilian people, and the audiences danced and cheered to the beat of the native music of Japan. 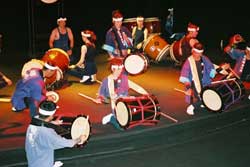 The powerful performance of the drummers. 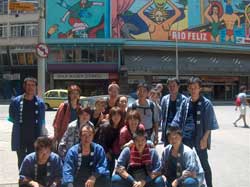 In front of the Baden Powell Theater

It had been planned that the concert at the Moacir Bastos College was to be held at an indoor gymnasium. The college organizers underestimated the power of the drums however and it soon became quite apparent that the acoustics in the gymnasium were inadequate. The drummers and members of the audience together moved the performance outside, moving equipment and chairs together. After relocating the concert outside, the drummers put on a powerful performance that delighted all in attendance.The drummers took the rigorous schedule in stride, finding time between performances to visit with Japanese Brazilian immigrants who had settled in this land decades ago. One group of immigrants in particular came all the way from Sao Paulo on the night bus to see the drummers from their native land perform. This group of immigrants had originally come from the same village as the drummers and it was a touching meeting of the two generations that were now separated not only time but by great distance. The Matsukawa drummers were joined at the Nikkei Kaikan concert (concert for the Japanese Brazilian community) by the local Rio de Janeiro Japanese Brazilian Taiko drumming group. It was quite heartening to see the two drumming troupes playing together, communicating with each other across the miles that separated their lives through the beating of their drums.

There were two concerts held in the city of Buzios , the first held for 350 children at the Buzios elementary school. The second outdoor concert was sponsored by the City of Buzios, and held in the center square. Buzios being a popular resort, over 700 tourists and locals gathered in the square for the final concert of the tour. The drummers outdid themselves for this final performance, bringing the crowds to their feet in a roar of applause that echoed well into the night. 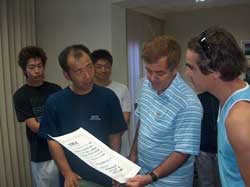 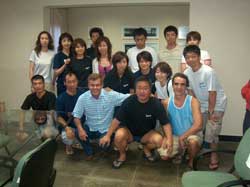 Visiting with the Mayor of Buzios. 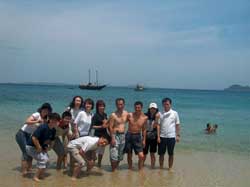 The beach at Buzios. 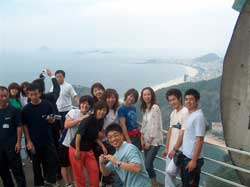 Looking down at the Copacabana beach.

Between performances, the drummers did get a chance to do a little sightseeing, climbing up to the infamous statue of Christ Corcovado, and taking the tram up Sugarloaf Mountain. With such a tight schedule, and the challenges of traffic in Rio, we did not have enough time to show the drummers all of the sights there are to see in beautiful Rio de Janeiro. Hopefully next time there will be a little more time to play and to sample the wonderful foods and beverages of this exotic country as well.Buzios was once a favorite place of actress Bridget Bardot, who spent a great deal of time in this quaint and peaceful setting. There is even a statue of her sitting on a park bench on the beach which is a favorite spot for photographs by tourists from Europe and other countries of South America. Buzios is also now the home for AHAN Rio de Janeiro headquarters. 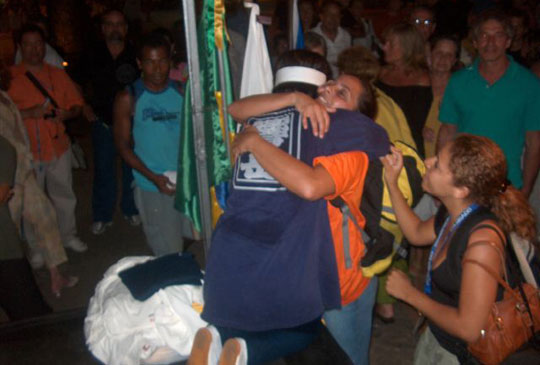 The performances moved the drummers and the audiences alike.

The success of this concert tour was due in large part to the talents and hearts of the sixteen drummers from Matsukawa, and we all sincerely thank them for their efforts. This success was also due however to the united efforts of many volunteers in Japan, Brazil and the United States together.

We also owe many thanks to the Consul General and Deputy Consul General of Japan at Rio de Janeiro who gave a tremendous amount of support, advice and assistance to the drummers, from before they left Japan, through the entire journey and until their safe return home. Important to mention as well was the assistance provided by Consul staff member Mr. Yoshida.

If your Japanese is up to speed, we also have a report by the leader of the Matsukawa Drummers, Mr. Eitaro Chino available here.