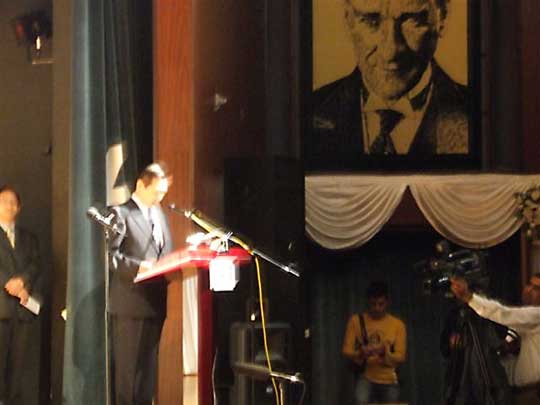 AHAN’s Cross-cultural International Concert Series 2006 featured the Matsukawa Kyougaku Taiko Drummers in Turkey this past October-November. The drumming ensemble of ten drummers traveled from Nagano, Japan to perform in Ankara, Turkey (the capitol of Turkey) Cappadocia (a national heritage archeological site near the city of Urgup) and the city of Istanbul (also a world heritage site).

This concert series was produced in conjunction with AHAN Nippon Kan Turkey as a cultural enrichment and fundraising series of events. Over 1500 people saw the Kyougaku Drummers perform live in concert, and thousands watched them on Turkish television. Once the drummers were discovered by the media, their concerts enthusiastically covered live on the tour and on the set for performance television interviews.

Over the past few years, the Matsukawa Kyougaku Taiko Drummers have been great supporters of AHAN and have been involved with AHAN in humanitarian and fundraising events on three different continents. The Matsukawa drummers are world renown for their powerful, down to earth and “from the heart” performances. Their home is Matsukawa village, high in the Japanese Alps in Nagano prefecture, Japan.

This years AHAN International Concert Series in Turkey was a tremendous success with the help, support and hard work of many of our friends and associates in Turkey. Homma Kancho’s article about his experience as Chief Coordinator of this tour; “Lessons Learned; Reflections of the Matsukawa Kyougaku Taiko Concert Tour to Turkey.

Before the first performance was held in the capitol city of Ankara, a reception luncheon was held in honor of the Matsukawa Drummers hosted by Ambassador Tomoyuki Abe. Mr. Abe welcomed the troupe to Turkey and wished everyone the best of luck on their upcoming tour. I believe that Mr. Abe was truly proud to receive the drummers on the eve of this history making tour.

Concert in the Capitol City of Ankara. 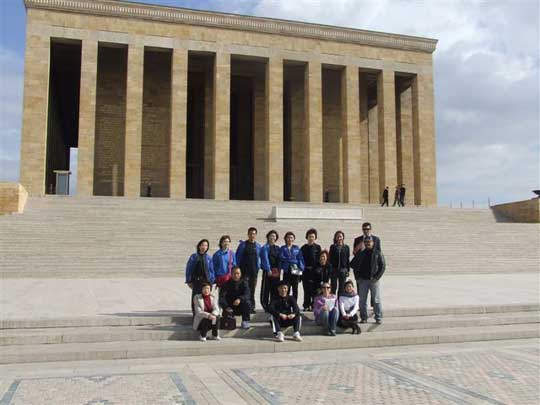 The drummers at the National Monument of Anitkabir, a memorial to
Mustafa Kemal Atatürk, the Founder of the Turkish Republic.

The concert held in the capitol city of Ankara was co-sponsored by the Japanese Embassy of Turkey, and was held at a concert hall provided by the Turkey Japan Foundation. Local leaders in the business, education and political communities in Ankara were all invited to attend this special concert event. The Japanese Ambassador Tomoyuki Abe gave the opening speech for the concert which was attended by a standing-room-only crowd of over 500 guests. Over twenty media outlets were represented by members of the press who crowded close to the stage with camera equipment in tow. The excitement and enthusiasm of the press infected the crowd who grew increasingly excited as the concert unfolded. Some of the members of the audience even joined the drummers on stage!

After the concert, the lobby was crowded with guests who mingled with the drummers and one another late into the evening. One of the purposes of this event was to unite Turkish leaders in the Ankara community through cultural exchange, and to that end, the evening was a success! 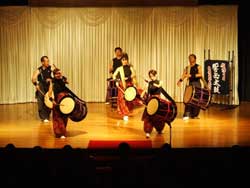 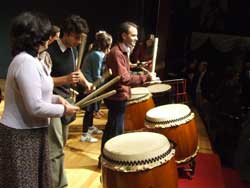 The audience loved it! 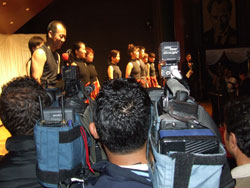 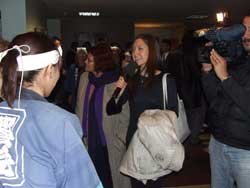 The women drummers were popular with the crowd. 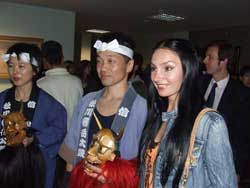 Just who asked who to take a photo! 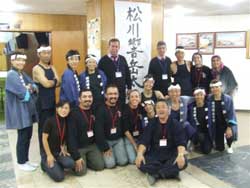 The after glow of an exciting concert!

The concert in Ankara was organized by Turkey Aikikai Ankara dojo students led by AHAN Nippon Kan Ankara tour coordinator Banu Alisverisci who worked tirelessly for weeks-on-end putting all of the details together for this special event. Many thanks Banu, great job!Navigating through a very crowded concert hall, the Japanese Embassy Consul Toyama, and Consul Fukuaka escorted VIP guests and press to their designated seating. Thank you very much too both consular for your experience and hard work.

Concert at Cappadocia in the City of Urgup. 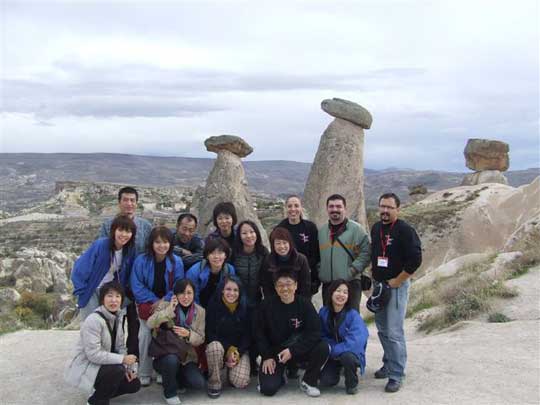 After the concert in Ankara finally drew to a close, the crew packed their drums and gear and headed for the highway for a five hour night journey southeast to the city of Urgup.

The city of Urgup was co-sponsor to the concert to be held that very next day. Urgup is not as internationally recognized as the world heritage archeological site of Cappadocia which is located in the region. Cappadocia was formed from the sedentary reformation of ash from the Anatoria volcano thousands of years ago and home too many historic civilizations. Urgup City, a small commercial center in the Cappadocia region hosted the Matsukawa Drummers for the second concert of the tour.

The crew arrived at the hotel in Urgup at 4:00 am. After just a few hours sleep it was time to go to the Urgup Civic Center for rehearsal. Cappadocia is famous around the world and visited by thousands of tourists each year. The less traveled city of Urgup still bares a friendly relaxed small town atmosphere and as it turned out, wonderful hospitality.

The concert itself was attended by over 600 locals, some of whom traveled from farther towns and villages for this unique opportunity. The Urgup concert was a family affair, and looks of awe and wonder shown brightly on the faces of the many children there.

As tour coordinator it was Homma Sensei’s goal to connect deeply with each audience, so after scoping the crowd, he and I (AHAN Nippon Kan Istanbul coordinator and translator) left the stage and stepped down into the crowd. There Homma Sensei held a question and answer session with members of the audience answering many eager questions about the drums, the drummers and Japanese music. It was not a speech. Homma Sensei engaged the audience in dialogue and the communication and interaction seemed to put everyone at ease. There were many serious and thoughtful questions, and a couple questions from kids that made everyone laugh. “What kind of faces do Japanese people have?” a young child asked sincerely. Homma Sensei answered, “Japanese people have scary faces like mine!” which made everyone laugh. After Homma Sensei had everyone smiling, he returned to the stage to introduce the drummers who began another magical show.

As in Ankara, when the concert ended the audience went wild! There was a rush of people on to the stage with the drummers for the last encore. Members of the Turkish congress, local leaders, heads of the police department and local celebrities all jumped on stage and had a turn playing the drums! It was quite a night for all! 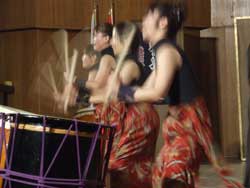 The drumming was intense. 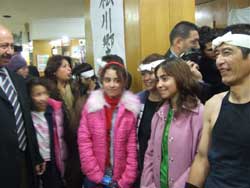 The audience loved it!

The following day, the drummers were able to spend a little time touring the ruins of Cappadocia and sample some of the local cuisine. It was only for a few hours however before it was time to get back on the bus and head for the historical city of Istanbul.This was the first time in the Cappadocia region that Japanese drummers had ever held a concert, especially of that size and intensity. I have a feeling it wont be the last!

Many thanks to Ersin Ozturk, Ilham Ucok, Ankara coordinator Banu Alisverisci (who traveled from Ankara to assist in the Urgup concert) and to Homma Sensei for serving as Master of Ceremonies.

Concert in the City of Istanbul. 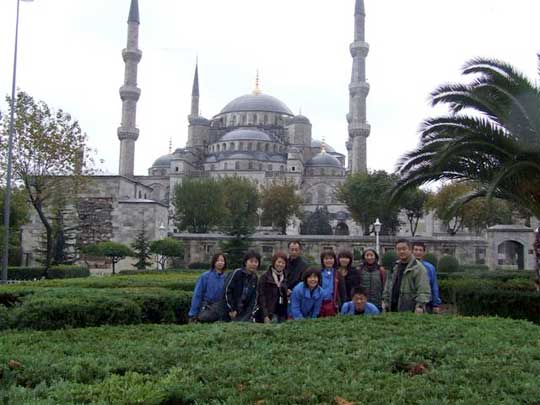 The Istanbul concert was held as a fundraising event for the TEMA Foundation, (the largest environmental protection organization in Turkey), and the Turkey Kidney Foundation. The event was co-sponsored by AHAN Nippon Kan Istanbul and AHAN Nippon Kan General Headquarters USA.

Funds were raised for donation through general public ticket sales and complimentary tickets awarded to both organizations. The concert was held at the Istanbul Technical University (ITU), which has been an institution of higher learning in Istanbul for over 400 years. The 500 seat capacity concert hall was secured by the former Turkish ambassador to Japan, Mr. Yaman Baskut who helped make this event possible. 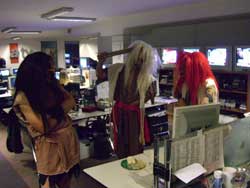 Drummer devils waiting to go on the air. 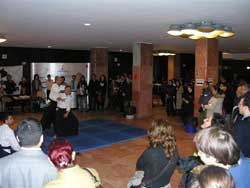 Early winds of winter brought cold and rain to Istanbul on the day of the concert, but did not keep the crowds away. The concert hall was almost filled to capacity for this unprecedented event. The Istanbul concert was organized by Aikikai Istanbul, Ali Uludag Sensei and his students who also performed an Aikido demonstration before the concert. 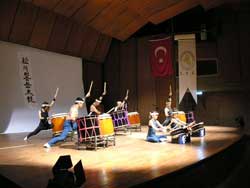 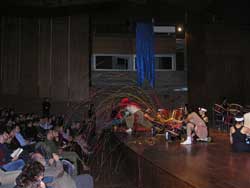 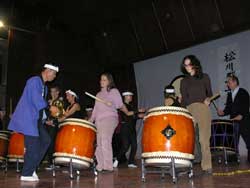 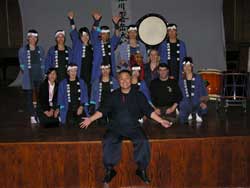 The thrill of victory! 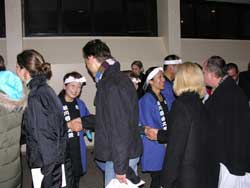 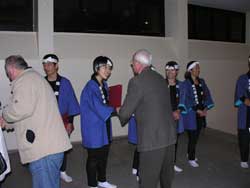 Smiles all around after the show!

After a whirlwind week in Turkey the drummers packed for home and the evening after the concert in Istanbul, left for Japan. There was little time for sightseeing in Istanbul, and we hope that we will have the opportunity again to show the drummers the sites of our city. Thank you very much for all of your tremendous efforts! 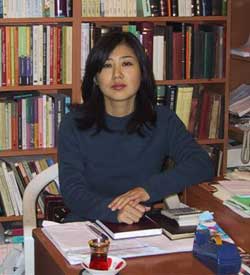 Megumi Machi graduated from Osaka University of Foreign Studies with a major in Turkish language studies. It was “love at first sight” for Megumi when she first visited Turkey in 1993 and in 2004, she moved to Turkey to attend the Istanbul University where she currently is pursuing a PhD in Turkish literature.

Today Megumi attend the university in Istanbul and works in a historical Turkish book store. She specializes in providing historical resources for study by Japanese scholars and also serves as a historical site guide and research coordinator for private organizations.

During her studies at the University in Osaka, Megumi served as assistant captain of the Aikido club and continues her practice of Aikido in Istanbul. Currently Megumi also serves as the AHAN Nippon Kan Istanbul Coordinator.

Megumi Machi can be contacted at info@sahafium.com for Japanese translation, interpreting and historical research resource coordination.