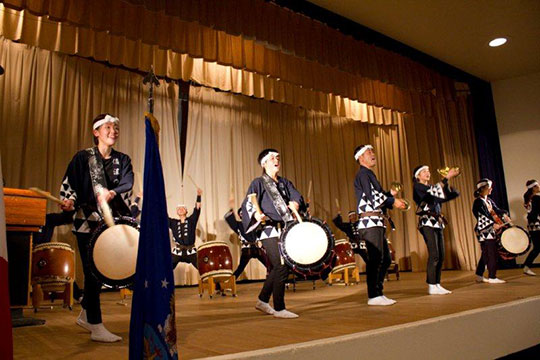 The first concert in the Kyougaku Taiko Drummers “Arigatou” Thank You Tour was held at Peterson Air Force Base on March 11th, 2012 on the one year anniversary of the disaster. The concert was played to a packed house with over 800 military personnel and their families in attendance, including several senior officers and enlisted. Servicemen and women that actually participated in Operation Tomodachi were in attendance and received recognition during the concert. 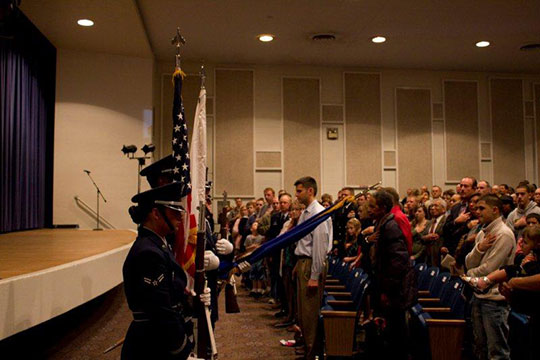 The concert began with renditions of the US and Japanese national anthems followed by a performance of 10 songs by the drummers. At 14:46 a moment of silence was held honoring the victims that were lost at the exact minute the earthquake began one year before. The host for the concert was Colonel Chris Crawford, Commander, 21st Space Wing, Peterson Air Force Base. AHAN Nippon Kan presented local military personnel that participated in Operation Tomodachi with four honorary plaques and Homma Kancho presented Colonel Crawford with a mounted Arisaka rifle that the Japanese military used during WW2 for the Peterson Air Force Base museum. 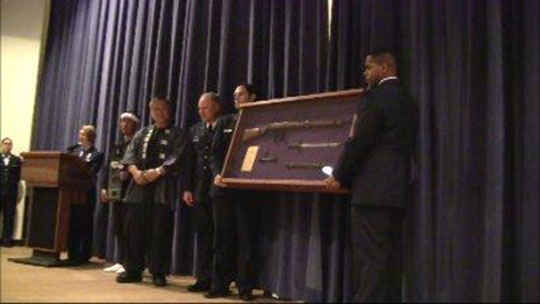 Donation of Arisaka rifle to Peterson Air Force Base 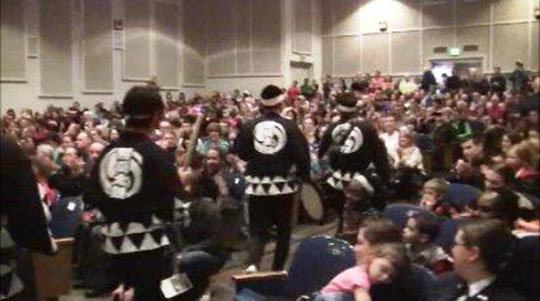 The performance received multiple standing ovations as the audience not only thoroughly enjoyed the music but also very much understood the purpose and meaning of the drummers message of thanks and appreciation for the American military and their assistance.

The encore included themes from US Marine military marching songs that ignited a response of patriotism and appreciation from the audience present.

Coordinating liaison for AHAN Nippon Kan for this military performance at Peterson Air Force Base was Nippon Kan graduate alumni uchideshi Scott Roney whose knowledge of military protocol was invaluable. Many thanks and “kudos” to Scott for a job well done! 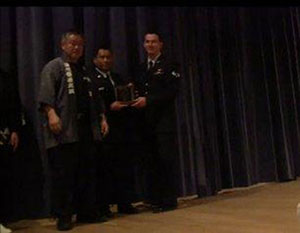 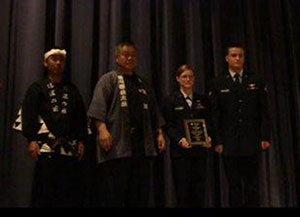 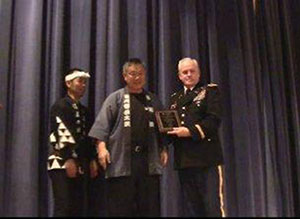 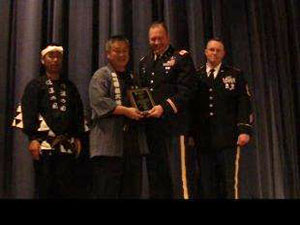 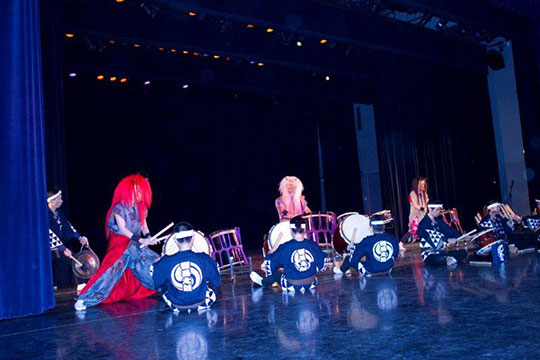 After the concert at Peterson Air Force Base ended, the drummers and staff hit the road. Heading south for a five hour drive toward Santa Fe, New Mexico, they stopped for a few hours sleep in Alamosa, Colorado along the way.  The group arrived in Santa Fe the next day. The concert in Santa Fe was held at the National Dance Institute and over 500 Santa Fe residences came to enjoy the show. Santa Fe is known as an artist enclave and many local resident artists attended the show.

March is off-season in Santa Fe and the town closes down early in the evenings when it is not the season for tourists. By the time the concert was finished and all of the drums and equipment packed, all of the restaurants in town were closed! To feed the group of hungry drummers and staff we found what we could at convenience stores and ate in the hotel rooms! This inconvenience could did not dampen the happy mood a successful concert performance makes and everyone still had a good time.

A Japanese gentleman living in Santa Fe relayed to us, “When the earthquake happened last year in Japan, all of my neighbors here were worried about me and my family back home. I am so thankful that you came here to Santa Fe, as you helped me express my appreciation and thanks as well”.

Another local native patron commented, “The drummers show such amazing teamwork. I can imagine how the survivors in Japan helped each other during the critical conditions following the disaster”.

Proceeds from the event after expenses were donated to assist children with cancer in the Santa Fe area. 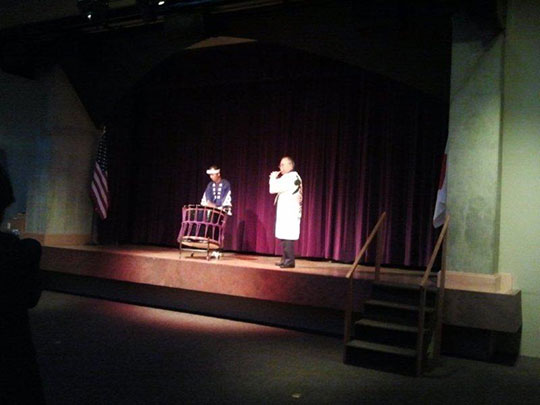 The next morning the drummers and staff left Santa Fe early in the morning for the long drive back to Denver. Taking shifts among 4 drivers, the caravan made it back to Denver in 6 hours! To save time we at sandwiches in the car for lunch; not exactly ideal travel conditions but the drummers were fascinated by the southwestern scenery that passed us by on the ride home!

Originally, when we were planning the itinerary for the Kyougaku Taiko Drummers Arigatou Tour, we had planned that this day would be a travel and rest day. Shortly before the tour began however we received an invitation from the Consulate General of Japan at Denver to perform at a reception they were organizing at Denver Botanic Gardens on the day of our return from Santa Fe. This exclusive reception was held in recognition of the 1 year anniversary of the great Tohoku earthquake and tsunami disaster in Japan on March 11th, 2011 and those from the Denver area who had contributed to survivor aid in Japan.
Agreeing to perform at this event, Homma Kancho made all of the arrangements for Mr. Tokutaro Watanabe, Japanese Drum Federation, Fukushima Prefecture Branch Vice President, to travel from Fukushima to Denver to join the Kyougaku Taiko Drummers in their performance for this event. Having come from Fukushima, which suffered severe damage during the earthquake disaster, Mr. Watanabe was a striking testament to the tragedy of the disaster and the spirit and will of the Japanese people to overcome any obstacle. Mr. Watanabe gave a speech at the Botanic Gardens reception and also played the Japanese flute shino fue with Kyougaku Drummer Leader Eitaro Chino.

The Botanic Gardens Reception was attended by many Denver dignitaries including Denver’s Mayor Michael Hancock and many Denver organizations that had sent aid to survivors in Japan.

The event was catered by 5 different Japanese restaurants in an elaborate Japanese buffet.

After the disaster in Japan, I remember hearing touching stories of children in Denver who donated their small piggy banks to support victims of the disaster. Watching guests sample the elegant fare at this copious reception I wondered about the necessity for such an abundant display by Japanese officials. It seems there should be a better way to express appreciation in a less flamboyant way, but this reception is a reflection of national government policy in Japan.

The concert at the Denver University Newman Center was the grand finale. Tickets to this Denver concert were only on sale a couple of weeks before all of the regular seating of about 950 andextended seating in the theater filled to capacity. AHAN Nippon Kan invited 100 USO and military service personnel in the Denver area and 50 sponsors and contributors to attend the concert as our guests.

Letters of Support by Colorado Leaders 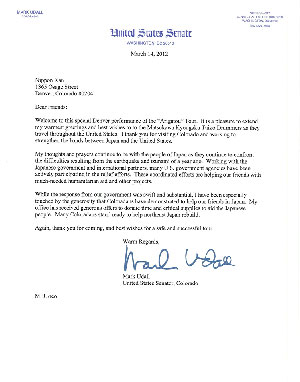 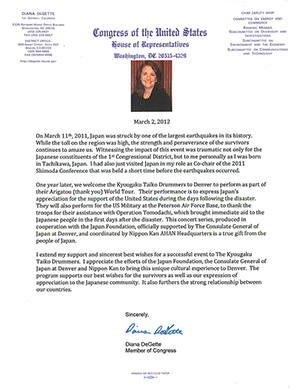 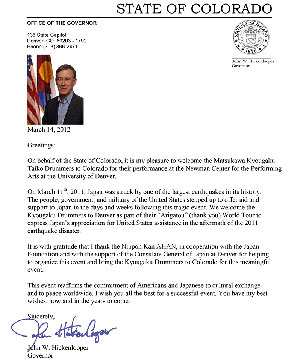 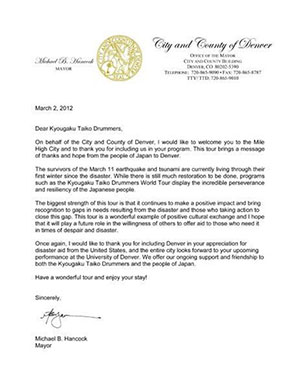 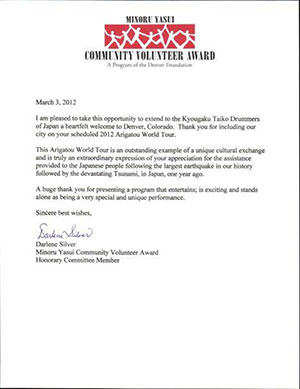 Our Master of Ceremonies for the concert was Mrs. Carolyn Kelly who did an outstanding job with introductions and the concert narration.

The concert began with large-screen video presentation depicting the aftermath of the Great Tohoku Earthquake and Tsunami Disaster in Japan and the immediate response by the US Army, Air Force, Navy and Marines.

The presentation depicted the tragedy and destruction of the earthquake but also showed the emergence of great human kindness and support in US rescue operations and finally the emergence of hope and the bonds of new lifelong friendship between Japan and the US. All of the images were portrayed to a beautiful rendition of the song “Amazing Grace”, and the overall effect touched everyone attending that evening.

After the video presentation, a joint detail from the CU Boulder ROTC Color Guard Posted the Colors while the US and Japanese National Anthems were played.

Our special guest for the evening was Mr. Tokutaro Watanabe, Japanese Drum Federation
Fukushima Prefecture Branch Vice President, who flew all the way from Fukushima, Japan; one of the areas worst affected by the earthquake to join us for this performance. Mr. Watanabe and Leader of the Shinano no Kuni Matsukawa Kyougaku Taiko Drummers, Eitaro Chino were introduced together and played a solo that received thundering applause.

After the concert, all of the drummers and sponsors were introduced and the drummers lined up in the theater lobby to shake hands and say thank you in person to patrons of the evening.

All in all, it was a spectacular event…

After the concert, the drummers and staff returned to Domo Restaurant for a private reception. Mr. Watanabe, our 65 year old guest from Fukushima, rose to speak. With tears in his eyes he expressed how much this experience in Denver had meant to him. The earthquake had caused much damage to his family’s property and the fields that provided his livelihood and he had tragically lost relatives. Mr. Watanabe had traveled all the way to the United States with only 7 days notice to spend only 3 days and 4 nights in Denver.  His performances as part of this “Arigatou” Thank You Tour came from his heart and expressing his own gratitude and the gratitude of the Japanese people did a great deal for him in his own healing. We all sincerely appreciate his mighty efforts and great contribution.

Please click here to read the touching and heartfelt speech given by Mr. Watanabe at the DU Newman Center Concert

Chino has been a Japanese Taiko drummer for most of his life. A year ago Mr. Chino suffered a serious injury in an accident that threatened to end his life long career as a drummer. I went to visit him in the hospital in Japan where he lay immobilized. “I will go to Denver for the “Arigato” Concert Tour”, he promised me; a promise I was not sure he would be able to keep…Three months later Mr. Chino arrived with the troupe of drummers for the concert tour.  Even not quite back to full strength, he performed heroically and provided strong leadership and inspiration for all of us. Sincere thanks to Mr. Chino from all of us.

The production of this concert was made possible by the efforts of US coordinator and Nippon Kan Vice President Emily Busch, Military Advisor Scott Roney and all of the Nippon Kan students who volunteered their time and talents to make this tour such an overwhelming success. Advertising was done mostly by social media and sponsors who publicized the event to their clientele. Mr. Toshi Kizaki, owner of the acclaimed Sushi Den and Izakaya Den Japanese Restaurants in Denver, Mr. Nao Kanda, owner of Amu and Sushi Zanmai Restaurants in Boulder, Enshin Karate’s Kancho Joko Ninomiya and Ichikawa Kendo dojo’s Mr. Ishikawa all worked to promote this event. Mr. Kizaki sent announcements to his mailing lists of over 20,000 patrons and treated all of the drummers and staff, a group of 30 people, to a private sushi lunch at Sushi Den Restaurant on the day after the concert.

Many thanks to all for all of your support.