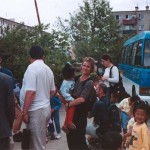 Our bus dipped and swayed as we made our way slowly through a maze of tenement apartment blocks. The paint, blistered by years of exposure to the elements, was peeling badly from the endless rows of buildings. There were no curbs, sidewalks or gardens, only barren patches of earth where children played between the walls.

The driver stopped our bus, which was made in Korea sometime in the 60s or 70s. He jumped to the street and strained to push open a twisted rusty gate far enough to let the bus through. As soon as the bus ambled to a stop past the gate, the children appeared. Running, they came, first two then ten, then 50. It was difficult to get off the bus because there were so many children waiting for us to unload. “Hello” they cried in English, as they jostled to get close enough to us for a handshake or a hug. The children were all dressed in clean but modest clothes and had beautiful eyes and smiles. 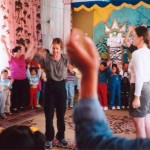 We had arrived at the National Association of Support for the Orphans of Mongolia, an orphanage school in Ulaanbaatar, Mongolia for children from the ages of 3-13 years old. 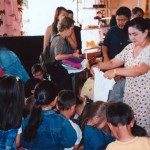 Fifty of the children ages 6-8 came down to greet us from the campwhere they live during the summer months. The rest of the 200 children stayed behind at the camp, preparing for our visit to the camp, later on in our trip. 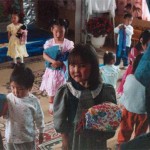 We had a grand time together. We sang and danced the hokey pokey together, and the children sang to us a Mongolian rendition 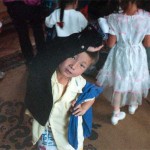 of “If you’re happy and you know it clap your hands”. We had brought with us about 500 pounds of used clothing and had a free-for-all trying on clothes. The clothes had been donated by Nippon Kan students, families and friends and were very much appreciated. Thank you to all that donated, I wish you could have seen their faces. 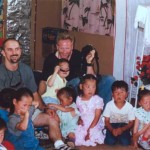 Duger Jamiyansharav, the director of the association, was on hand, as well as 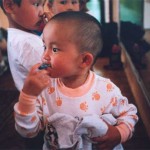 Sharkhuu Galsandulam, Vice Director of the Central Employment Office. We distributed all of the children’s clothes, $5,000 worth of medical suppliesand a $1,500.00 cash donation fromHomma Sensei and AHAN. We announced our plans for AHAN and pledged to donate $1,500 each month for the next five years. I saw tears in the Directors eyes as our translator relayed our promise to him. 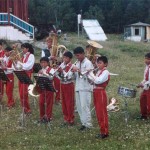 This was not our only meeting. The following week we took our bus over bumpy, dusty roads into the mountains about two hours outside of Ulaanbaatar to visit the children at their summer camp.

The children saw us coming as we approached the camp, and it was obvious that they had been waiting for us all morning. I had never in my life dreamed that I would ever be welcomed somewhere by a brass band, yet there it was, a band of children dressed in hand-me-down uniforms, standing by the gate in a meadow of flowers. Now there were tears in my eyes.

We were welcomed up the hill by the staff towards the wooden barrack-like structures in which the children lived. We were then surprised and delighted by a traditional song and dance recital that was remarkably well done. A small group of children gave each of us a bouquet of freshly picked wild flowers.

During the summer months, the 250 children live in the mountain camp. The natural setting offers comfort to the children, and they seemed to be thriving there. They spend their days with academic schooling, and also training in vocational skills such as auto mechanics, sewing, and other activities that would aid in their future independence. The high school-aged kids are usually in boarding school during the rest of the year but come back to the orphanage camp to help during the summer months. 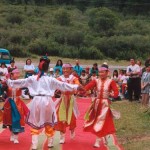 Where did these children come from? Mongolia gained its independence from Russian rule in 1990. The following years have been and continue to be a time of major transition from decades of Communist rule to Democracy. These “labor pains” have been felt and had their effects on all of the Mongolian people, the old and the young. The people most affected have been those living in Ulaanbaatar, 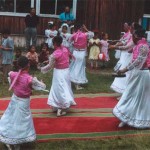 and the few other cities in Mongolia. Under Communist rule, most had been government workers and had had everything given to them by the government. With the collapse of Communism, these people now had to learn to fend for themselves. The effects on the rural population were not as evident as their lifestyle remained mostly the same. For the city dwellers, however, depression, divorce, alcoholism and broken families became more and more commonplace. 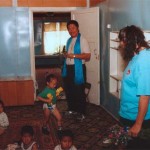 The children at the orphanage are the lucky ones. In downtown Ulaanbaatar, the hotel where we stayed was next door to the present day Communist Party Headquarters. Behind the hotel there was a trash storage area with open manholes that led down to the city’s steam and sewer systems. I saw children, including toddlers living down in the manholes right behind our hotel.

Here in the United States we see television commercials for help organizations that depict barefoot and dirty children with little to eat. These conditions exist here in Mongolia. The one difference is that most of the Third World countries that receive support from U.S. organizations are in Africa or South America; countries with warm climates. In Mongolia winters are severe with temperatures reaching –30 centigrade. Many children freeze to death every winter on the streets of Mongolia. The manholes that lead down to the city steam pipe system are the only shelter that many children know. Sometimes they freeze to death, other times they suffocate from lack of circulated air in the tunnels.

What we were able to give on this trip was a small bit of comfort, but much more is needed. The Mongolian government is making progress, but the country as a whole is still struggling to make a new and democratic nation. Other countries such as Japan and the United States are lending aid, but the Mongolian people need to open their eyes to this problem for it to be truly remedied.

One hopeful note is that the religions of the Mongolian people are now on a comeback after near destruction by the Communist leaders. With religious guidance, compassion blooms.

The children innocently with the Frisbees we brought them. It took a few minutes to get across the concept that you were supposed to throw the Frisbee TO someone, but everyone had a good time anyway. These children are the descendants of the great and fearful Genghis Khan who in his time dominated China, Asia and parts of Europe. Generations later, Mongolian children, his descendants, are victims of politics and clashing ideologies.

It is my personal goal to help these children. They currently are living on an average of 41 cents a day for food, clothing, medical attention and education. It is not enough, but these children are doing okay. Another 50 cents per day can increase their quality of life and bring more children in off the streets. It is a goal that can be accomplished.

There are homeless and hungry children right here in the United States, and Nippon Kan and AHAN are involved in programs to help them on a local level. In this country, many resources are available to those who need help, which simply is not available in other countries like Mongolia. Through AHAN, I will do what I can to honor the pledge to support these children with $18,000 per year for the next five years. Maybe in five years time, the Mongolian government and economy will be stable enough to support these programs for themselves. Or maybe, there will be less of a need.

In a field of wild flowers, we were offered the most gracious and innocent hospitality I have ever experienced. It was a day I will never forget. As the bus made its way down the bumpy dusty road, the children waved goodbye until we could see them no more.

Just Wait Little Children, Just Wait a Little Longer…The Aikido community will be back to take care of you.