Congratulations to the graduating uchideshi! 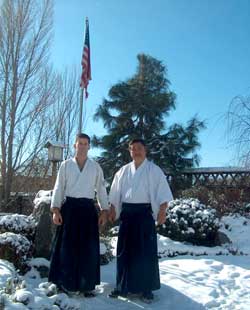 At Keiko Hajime, Jason Lowrey’s graduation from Nippon Kan’s uchideshi program ended with 100 ukemi falls! Nippon Kan usually has three to five uchideshi (live-in students) living at Nippon Kan at any given time. The motto for these hard working students is Uchideshi 24-7 which accurately describes their practice on and off the mat.

Uchideshi life in basic ways is not any different than living outside of the dojo. There is laundry to do, cleaning, shopping, cooking, maintenance chores, gardening etc. If a person cannot take care of these simple daily tasks for themselves in the outside world, then they will not be able to succeed as an uchideshi. This is just common sense.

The uchideshi program is for students who already have learned to take care of themselves and their own daily responsibilities. Sometimes people misunderstand, and think that everything will be taught to them. This is not true. Uchideshi candidates that lack common sense and the ability to take care of their surroundings will not succeed in the program. In the academic world if a student does not know his or her a,b,c’s, they cannot study at a university. There must be a basic foundation in place before the subject of practice can begin. A true uchideshi experience is not like “Karate Kid”; this is not the movies.

One characteristic of a successful uchideshi is to be able to recognize shortcomings and areas in one self that need developing. Actually this is a big part of the uchideshi experience; to learn how to assess oneself honestly and humbly. Some uchideshi blame the dojo or others for personal shortcomings which denies them the chance to learn and grown. A person with this kind of attitude will not succeed in the uchideshi program. 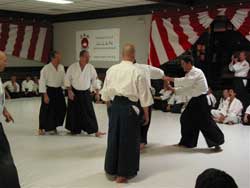 100 throws from sempai- Jason on the right. 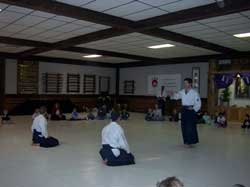 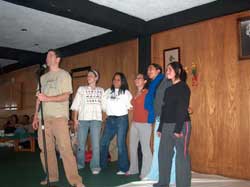 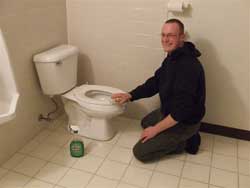 Thomas cleaning toilets. He will be graduating soon as well.

Jason graduated at the beginning of January 2006 after a five month term and will now begin medical school. Thomas will be graduating soon and will return to his studies at the university near his home in Germany. Both Jason and Thomas will be traveling with Homma Kancho to India and Nepal to assist as interns in AHAN international project development.

In the hallway leading to the dojo at Nippon Kan we have a special plaque board reserved for graduates of the uchideshi program. It is indeed an honor and an accomplishment to have ones name on the uchideshi alumni board. Many alumni uchideshi return from time to time to say hello, and recently we had two graduate alumni uchideshi that stopped by to introduce Homma Kancho to the newest members of their families! 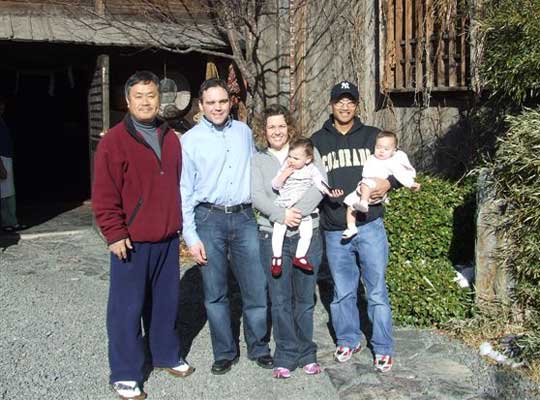 Rob, Class of 98’ and current Nippon Kan Instructor Rudy, Class of 97’;
Alumni uchideshi with their babies.