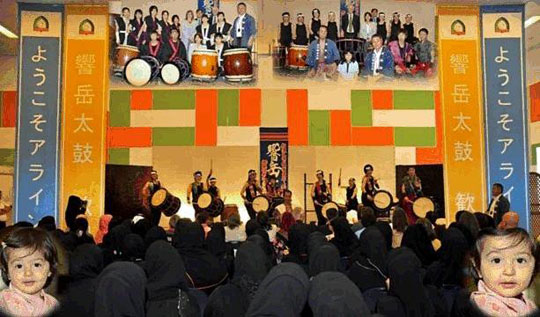 Private photographs are taboo. This is an official campus photo of the concert.

On the following day, the drummers visited the city of Al Ain for a concert to be performed on the HTC Women’s University campus. This campus has smaller accommodations, so two performances were scheduled to accomodate the over 600 women in attendance. The Woman’s University in Al Ain does not have a gymnasium. In accordance with Islamic tradition, sport and fitness training is not a part of the curriculum for women, so no such facility exists on their campus. The concert instead was held in a very large cafeteria facility and was very well received by all of the women students. The students gathered around the drummers excitedly after the concert shaking hands, taking photos and gathering autographs. For this concert, Mrs. Tatsuro Watanabe and Mr. Ohmori were in attendance and helped supervise a wonderful luncheon held afterward for the drummers and guests. After performing the hard physical work of two back to back concerts, the young drummers greatly appreciated the wonderful lunch that was served.

On all of the tours I have accompanied the Kyougaku Drummers, I have noticed that every spare moment is used to the fullest. Schedules and locations are checked and double checked, impromptu rehearsals, equipment checks and meetings fill any spare moments between performances. The drummers did have a few hours for a bit of sightseeing, and all in all did a fantastic job keeping up with the rigorous pace of this week-long tour. The Japanese Ambassador’s wife, Mrs.Watanabe was a great help looking after the drummers, and seemed to thoroughly enjoy being able to see the drummers perform concerts on three separate occasions. Mrs. Watanabe’s kindness and thoughtfulness was reflected in the rest of the Japanese Embassy staff who worked diligently; running to and from the airport, making preparations at concert locations, looking after transportation, meal and lodging arrangements, and offering Japanese home-style comfort to the drummers and staff. Special thanks to the Japanese Embassy Cultural Attache, Mr. Susumu Yoshida for working so hard, always with patience, humility, and a smile.Honto ni, Domo Arigato Gozaimasu.

On the last evening before the drummers left Abu Dhabi for Japan, all of the Embassy staff involved with the week-long concert tour gathered at Mr. Omori’s private residence for a farewell party. It was a memorable evening and a week that the drummers from Matsukawa will not soon forget.

Special thanks to First Secretary and Consul Haruo Yamagami, formerly Consul at the Japanese Consulate in Denver, who coordinated the week long concert tour for Embassy staff, the HTC staff who accompanied the drummers every step of the way and to Mrs. Ann for all of your support.

My greatest thanks and appreciation goes to every drummer from Matsukawa, Japan for their tremendous talent, effort and endurance. All of the drummers lead their own lives in Matsukawa with school, jobs and family life. Each drummer practiced diligently; fine tuning their skills to make this concert tour an overwhelming success. I admire the drummer’s power, not only for the incredible music they perform, but for their strong spiritual connection and spirit. Without this spirit, they never would have been able to reach such heights, and touch as many hearts as they did. Thank you to the Matsukawa Kyougaku Taiko Drummers for sharing their spirit and their drumming with the people of the United Arab Emirates. There are already many requests for a return trip next year! 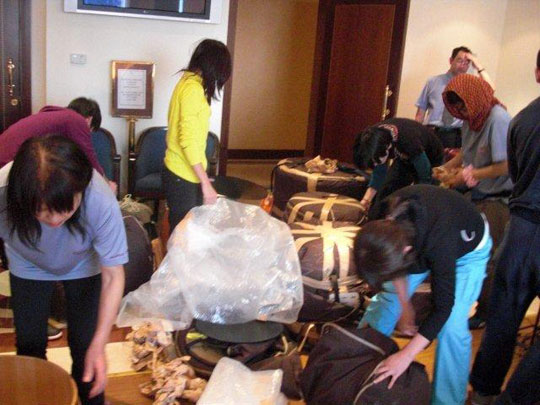 After arriving, no time for rest; time to unpack and check the drums. 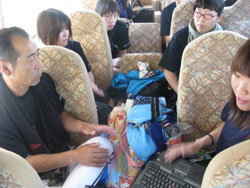 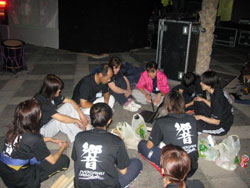 I also must thank all of the local people in Matsukawa Village who supported this effort behind the scenes. I offer my salute for their understanding and support of this important cultural activity. Unlike other sports that focus only on winning or losing and the thrill of the game, the drumming in Matsukawa embodies and reflects the true spirit of the people. In Japan there are very few drumming groups that have had so much international exposure and acclaim. The concert performed on this tour at the Emirates Palace hotel was a world-class performance beyond any of the drummer’s wildest dreams. It was my reward to see them triumph with the challenge.

I hope that the people of Matsukawa will continue their vital support of the young drummers of their village in reaching new dreams in the years to come.

Notice:
For privacy and security reasons, filming and photography was limited on this trip. Photos will be limited in this article.