Homma Kancho met with Nippon Kan Alumni staff and supporters for a meeting in Tokyo, Japan. 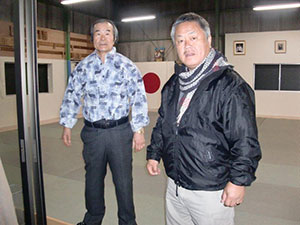 Homma Kancho traveled to Nagano Prefecture, to visit with Kyougaku Taiko Drummer President, Mr. Eitaro Chino. Together with Mr. Chino and Ms. Yamamoto, Homma Kancho went to visit Mr. Tokutaro Watanabe in Motomiya City, Fukushima to thank him for joining AHAN in Denver in March 2012 for the Japanese Taiko Drumming concert commemoration of the Japanese earthquake and tsunami disaster of March 11, 2011.

Other members of the Fukushima Taiko Association joined them for a dinner celebration. As a chilling reminder of the 2011 nuclear disaster in Fukushima, on the dining table in Mr. Watanabe’s home was a meter for reading radiation levels. Everyone visiting was surprised to see that the vegetables that had been grown in the area and prepared for dinner that night, registered slightly positive for radiation on the meter…