Commemoration of the Hungarian Translation of “Aikido for Life”. 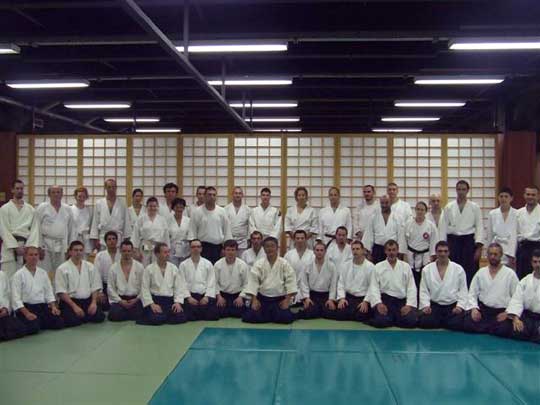 Over the years, Homma Kancho’s first book “Aikido for Life” has been translated into seven different languages. It was the recent publication of “Aikido for Life” into Hungarian brought him to Budapest, Hungary to commemorate the event. We took Homma Kancho to a lovely hotel in downtown Budapest and then to our Butokukan dojo, which is housed in an old stone church in a historical section of the city. The six-story church building recently was completely restored, utilizing the open six story high interior dome in the center as a focal point. The new multi-level interior has space for six dojos—large and small—multiple-use hall, museum, reception area, nursery with indoor playground, restaurant, snack bar and locker rooms fitted with saunas, Jacuzzi and massage services. The new facility now houses 3,000 square meters of usable space and cost over $5.6 million. I think it is safe to say that there is no other facility like this in all of Europe, and maybe in the world.

The owner is an Israeli-Hungarian young entrepreneur who practices Karate under the director of the Butokukan facility: Attila Miskoczi Sensei. Their dream of a martial art and cultural event center for the Hungarian people became a reality when the center opened in Budapest in October of 2006. 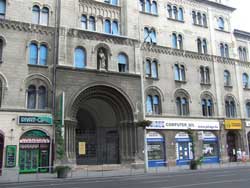 Aikido at the new center is instructed by Szalai Balazs Sensei who is 30 years old. Balazs Sensei has practiced Aikido for 14 years but still holds the rank of Aikikai Shodan. Currently Balazs Sensei is an independent Aikidoka, which allows him to practice or study any style of Aikido he likes. There are many instructors like Balazs Sensei in former communist block countries that either have not had the opportunity for promotion through Aikikai or simply cannot afford it. Even without formal recognition of his accomplishments, Balazs Sensei has about 100 students practicing with him at a very high technical level.

Hungary gained its independence from Russia in 1989. Even before its official independence, strict laws under Gorbachev’s rule had relaxed somewhat in the satellite countries, allowing for the growing popularity of martial art practice. Still, at that time the martial arts were mostly practiced underground, in secret, from second-hand books on martial art techniques.

In 1987, Tamura Shihan came to visit Hungary from France. This was Hungary’s first major exposure to Aikido, but it took many years after this initial visit for the popularity of Aikido to take hold. Now there are about 40 different dojos and practice locations in Budapest alone; yet interestingly, there are not any high-ranking Aikikai instructors living in Hungary. 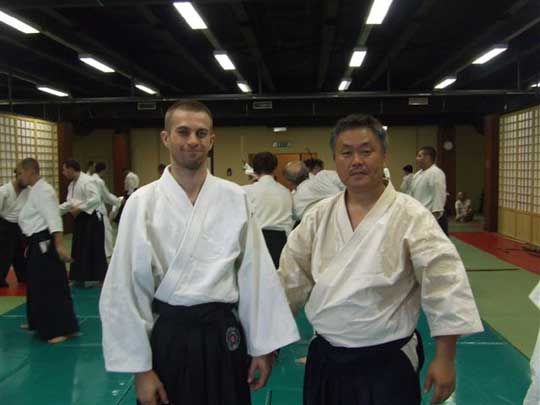 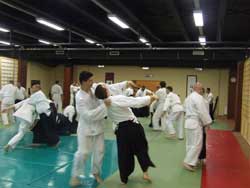 High-ranking instructors from Hombu dojo in Japan come to Hungary on occasion, but of course cannot stay. Each shihan has their own groups of students, but since they are all from different organizations it is difficult to unite all of them together into one official government-recognized Hungarian coalition.

There are many Aikidoka in Hungary that do not like the splintering of the Aikido taught in Budapest. We ask:“Where is the harmony in our Aikido practice in Hungary?” High ranking shihan come to Budapest every few years to hold weekend seminars, but usually their purpose is to collect examination fees rather than teach creatively. What we truly wish for is more consistent instruction. That is what is truly in our hearts.

The only students in Hungary that receive promotions are those with extra time and a lot of money to pay for them. Belt advancement in Hungary is based on the ability to pay, not on leadership or technical proficiency. The same certification issued in Japan through Aikikai costs about three times as much in Hungary. It is one thing to give a large donation in appreciation of receiving a new rank, but this is not the way it is in Hungary. Here the prices are preset very high. At certain dojos in Budapest, instructors charge up to $1,000.US to test for the Aikikai rank of shodan. I wonder if the high-ranking instructors who come to visit Hungary every few years are aware of these pricing practices in their absence. After testing, many of the students able to pay for these promotions open their own dojos soon after receiving their rank. This lack of continuity only adds to the confusion and general lack of cohesiveness in our Aikido community.

For Homma Sensei’s seminar in Budapest, Aikidoka from many dojos came together. This was a precedent-setting event for us and we enjoyed sharing time with students from other dojos. The students from the Kobayashi dojo in Budapest were especially friendly, courteous and attentive. It was quite apparent from their manner the caliber of instructor they had in Yasuo Kobayashi Shihan. www.kobayashi-dojo.com We made many new friends with fellow Budapest Aikidoka who also do not care so much about rank or affiliation, and made new plans for developing our training together in the future.

I think Homma Sensei really enjoyed Budapest for the very short time he was able to spend with us, and we are already making plans for his return next year.
Link here to an article written by host and translating coordinator for “Aikido forLife in Hungarian”, Akos Szederjei..

Written by a Budapest Aikidoka