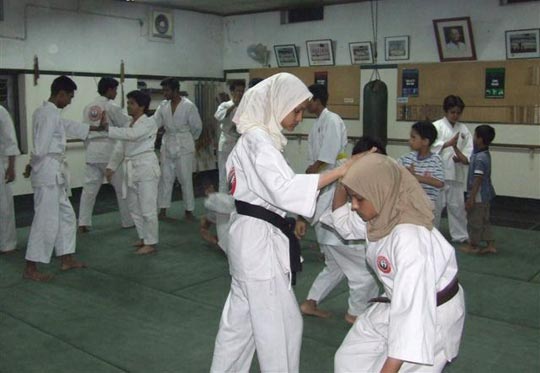 My country of Bangladesh gained its independence from East Pakistan in 1971. There are one hundred and forty million people living in Bangladesh today. Bangladesh is a small country surrounded on three sides by India and our main industry for export is cotton apparel which is widely exported to the United States and Europe.

This past February, Homma Kancho from Nippon Kan General Headquarters in the United States came to Bangladesh and visited two of our Aikido groups here in Dhaka. Early in 2005, I read on the Nippon Kan website that Homma Kancho had visited Nepal. I emailed Nippon Kan headquarters in Denver to find out when he might be coming again to Nepal in hopes of going there to attend his classes. Homma Kancho himself wrote back to me and said, “If I visit Bangladesh it only costs the price for one to travel and many people can practice. I would like to visit you in Bangladesh”. I wrote back to tell him we had no money to invite him, but he assured us that funds could be made available to cover his travel expenses. Homma Kancho also replied “I would like to experience and learn from your country. I would like to meet and practice with Aikidoka in your homeland”. When Homma Kancho arrived in Dhaka on February 11th, 2006 we couldn’t believe that he had really come to see us. We stood in amazement as he stepped from the plane and waved a friendly hello.

Homma Kancho quickly changed into a t-shirt and khakis pants and asked if we might visit the local markets. He told us that he always likes to start learning about a country at the markets where one can get a true feel for the lifestyle and heart of the people. Homma Sensei, small camera in hand and I hopped into a bicycle-drawn rickshaw and headed for the local markets in Dhaka. 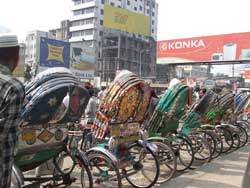 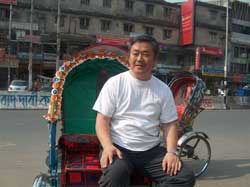 Homma Kancho on board a rickshaw. 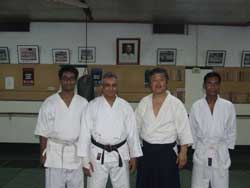 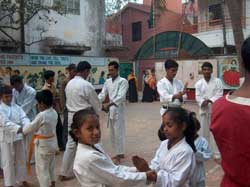 Practice at the Paris school.

Homma Kancho instructed at this dojo for three consecutive evenings. Each morning of those three days, we traveled by rickshaw at dawn to a private school in the Goran area where martial art practice is held on the outside grounds each day before school begins. The courtyard practice space was covered with cobble stone bricks that were laid unevenly and in bad repair, but this was the only area that was available. We were worried that the area would be unsuitable for Homma Kancho, but our worries disappeared when he told us “fighting is not done only on tatami mats”. The practice was a mixed practice of adults and children, and everyone enjoyed Homma Kancho’s teaching very much. This private elementary school was founded by Principal MD Achraf Hossan in 1970. The martial art club established at this school was founded to keep young people interested in healthy activities in 1991 by A.B Z. Nain Sensei who joined the school as the chief martial art instructor. Practice is held at school every morning before classes begin for an hour and a half.

My father, family and friends were all very concerned that Homma Kancho’s stay in Dhaka would be comfortable enough for him, and everyone tried very hard to make his stay an enjoyable one. Homma Kancho however made the job easy with his positive outlook and openness to experiencing our homeland. I think that he enjoyed our country and our life here very much.

Between morning and evening practices, Homma Kancho asked if he might be able to visit a local orphanage in Dhaka. We arranged two visits for Homma Kancho, the first visit was to the Dharmarajika Buddhist Temple (click here to download a pdf with more information about the temple) and the second was to the Tara Majsid Madrasah Islamic Mosque, both in Dhaka. The Dharmarajika Temple, which has historical roots in what is now Bangladesh going back over 2000 years houses over 500 orphans and the 300 year old Tara Majsid Madrasah Mosque houses about 150 orphans at a time. There are many mosques in Dhaka that care for children, but we had time to only visit one. Homma Kancho spent a great deal of time at both places, playing with the children and talking with volunteer staffs that ran the kitchens that had so many mouths to feed. He also spoke with administrators about the conditions and challenges each faced on a daily basis. It was a special visit at the Tara Majsid Madrasah Islamic Mosque where Homma Kancho was made to feel very welcome and was given a rare tour of the facility. This was the first time a Japanese National had ever visited here. 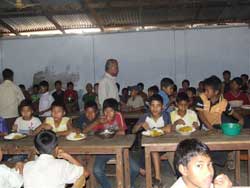 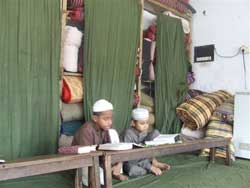 Children studying at the Tara Mosque.

After concluding these visits Homma Kancho asked if we could go to a store that sold rice. We found a nearby store and bought rice for the orphanage facilities. We had heard from one of the llamas in charge of the monastery facility that feeding five hundred children twice a day required about 160 kilos (about 350 lbs.) of rice per day. Homma Kancho donated one ton of rice that day. 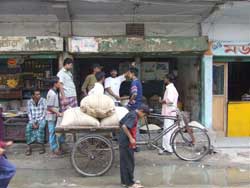 Maji (Me) negotiating at the rice store. 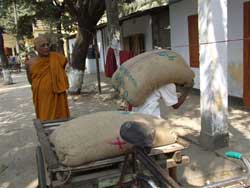 Carrying the rice into the temple.

Homma Kancho commented, “In this country I have seen poverty, but especially visiting the orphanages, I have seen so many who are helping to take care of so many children. It warms my heart to see so much care being given. This experienced has made me think a great deal and I have learned many things. There is richness here. Donating the rice is my “class fee” for what I have learned here. It is also AHAN’s (Aikido Humanitarian Active Network) philosophy to support those in their efforts to help others, and today AHAN Nippon Kan Bangladesh has been born.

Homma Kancho explained to all of us about the working of AHAN and the relationship between Aikido and humanitarian involvement in our own communities. I too want to continue working with AHAN in Dhaka. Homma Kancho taught us about many subjects besides Aikido. I was impressed by the fact that the AHAN humanitarian projects Homma Kancho speaks of he contributes to himself with his own actions, not just words.

I want to thank my father MD Matitar Rahman Sarkar for his understanding and support of my Aikido activities and for helping make Homma Kancho’s visit a successful one. I would also like to thank Kazi M. Quasi Sensei, Principal MD Achraf Hossan and the Paris School staff for their support as well.

Homma Kancho promised he would visit again, and with that he was off to his next stop; Mongolia.