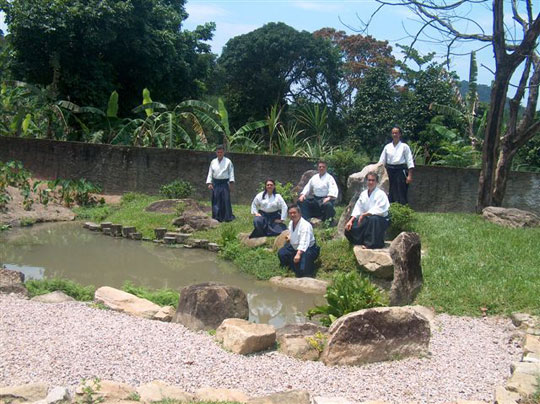 The power behind the scenes; AHAN Rio staff.

After bidding the drummers farewell, Homma Kancho taught a special one day Aikido seminar October 29th, at the Brazilian Army Copacabana Beach Training Center for aikidoists in and around the Rio de Janeiro area.

The next day Homma Kancho and Luc Leoni Sensei went to check on the Okaeri Dojo garden project in the mountain town of Santo Aleizo outside of Rio. A meeting was held to determine the scope Phase III this project would have. Phase III is scheduled to begin in April, 2006 after the summer season has ended in Brazil. Recently a test program for raising farm bred fish and chickens for eggs for market had been introduced at Okaeri dojo, and new procedures were discussed to fine tune this program. 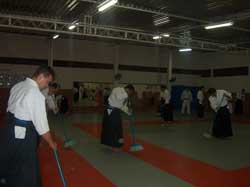 Cleaning the mats before practice. 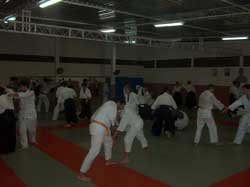 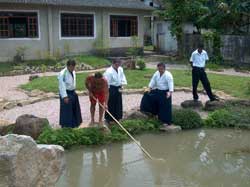 Checking the koi (carp) in the Okaeri dojo garden pond. 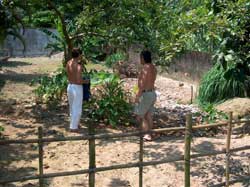 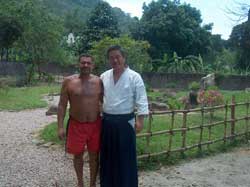 With Mr. Seed who maintains the
garden at Okaeri dojo.

Every weekend, Okaeri dojo becomes a destination retreat for Aikido instructors and students from the Rio de Janeiro area as a place to come and practice Aikido and relax in the beauty of the new Okaeri gardens. AHAN general headquarters has supported the development of Okaeri dojo as just such a place for instructors and students of all styles and backgrounds to communicate and learn from one another.