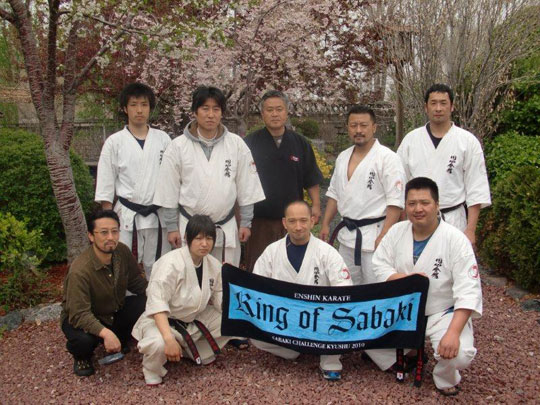 Denver, Colorado is also home to Enshin Karate World Headquarters, led by Kancho Joko Ninomiya. Many young Japanese people have traveled from Japan over the years to study at Enshin Headquarter as uchideshi live-in students. The most promising and talented have returned to Japan to open their own dojos, settle down and raise their own families. Every year these former “alumni” uchideshi return to Denver, now as coaches with promising students of their own. They come to participate in the Sabaki Challenge World Karate Championship and for the past few years, all of these former uchideshi coaches and their star fighters have stayed at Nippon Kan during the tournament.

Having been an uchideshi myself in my youth, I have long taken care of the Enshin uchideshi. Recognizing the young talent in these students, it brought me happiness to add a little comfort to their lives in the midst of their uchideshi training. It was easy recognize that these students would grow into leaders when they returned to Japan, and now to see them every year with new students of their own makes me very happy indeed. 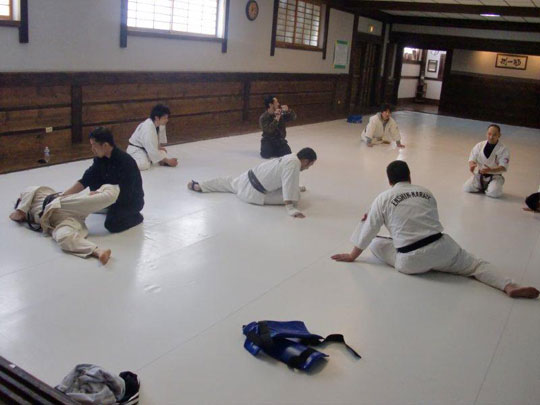 The fighters stretching routines are more sports science that bravado. 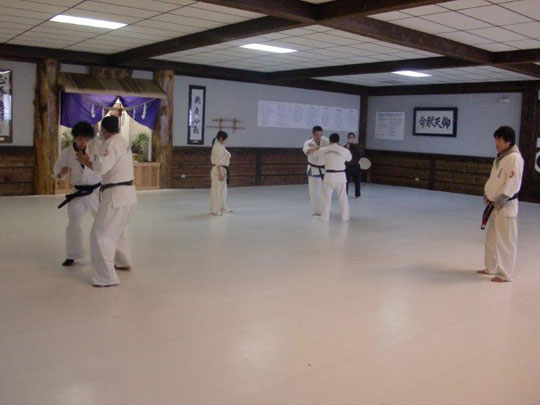 Last warm up at Nippon Kan dojo before the tournament.

For these “alumni” uchideshi, Ninomiya Kancho is a father figure. I am more like an uncle, and it is easier for them to relax around me. Besides, Ninomiya Kancho does not drink, so they know if they stay with me that there will be a beer or two available to celebrate with after the tournament!

This year, the coaches brought three fighters to participate in the Sabaki World Championship. Of the three, one fighter won the men’s middleweight championship, one fighter won the woman’s championship and one won the heavy weight runner up title. All of the fighters and coaches came back to Nippon Kan after the tournament to celebrate the accomplishments of the evening’s matches and the most important triumph of all; the fact that there were no major injuries.

There is something a bit odd about full-contact Karate fighters staying at an Aikido dojo, but it is a time that all of us at Nippon Kan look forward to.

The Enshin students are able to stay at Nippon Kan during this international tournament because they have a very wise Sensei in Ninomiya Kancho. Ninomiya Kancho is a martial artist that I have a tremendous amount of respect for. It is evident in the quality of students of Enshin Karate and the legacy they are now carrying forward.