When leaving the Denver airport after Mr. Than’s arrival, Mr. Than looked toward the sky and watched with great interest the vapor trails behind the number of planes in the Denver sky. “What are those white lines behind the planes?” he asked. Puzzled, we looked at the planes wondering what he found so unusual about them until we realized that the atmosphere temperature is much colder here in Colorado, allowing for the vapor trails to form. In Myanmar there are no vapor trails to see as the atmosphere is much warmer there. Mr. Than’s observant eye was to endear us on many occasions in the visit. This fresh perspective was our welcome from the Myanmar people to Denver!

Morning: The first order in the morning was to 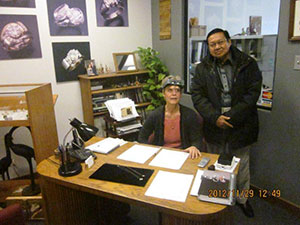 buy some long winter underwear for Mr. Than! Denver in winter is beyond cold for a Myanmar native. The afternoon was highlighted by a trip to the Denver Natural History Museum where he studied an exhibition of dinosaurs. He was most interested in a group of students who were looking at the exhibit. This is understandable since Mr. Than is an educator and principal of a high school in Myanmar. He also went to see a movie on the western frontier at the IMAX and stopped by the studio of Emily Busch Sensei who is a jewelry designer and goldsmith.

Evening: In the evening, Mr. Than enjoyed an evening at the home of 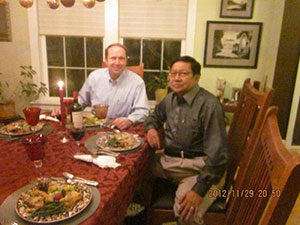 Nippon Kan President, Doug Kelly with his wife Carolyn and their girls Katherine and Rachael. 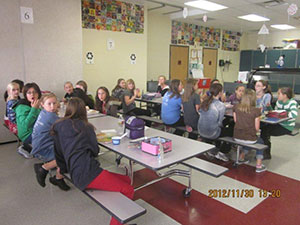 Observing a class at a local elementary school

This visit was organized by Paige, a member of Nippon Kan staff and Coyote Creek Elementary School Teacher. They watched a class and Mr. Than ate lunch with the students in the cafeteria. Mr. Than was very interested in the open educational style of Denver schools.

Evening: A trip downtown to see the Christmas “Parade of Lights” at the 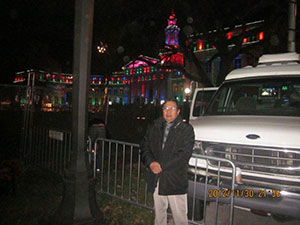 Denver City and County Building that kicks off the holiday season in Denver.

Morning: Sightseeing in the Rocky Mountains with Homma Kancho. 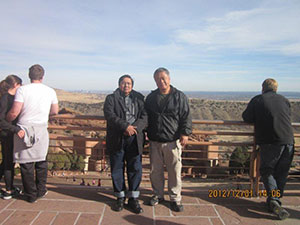 Afternoon: Mr. Than visited the Myanmar Dharmaparala Temple in 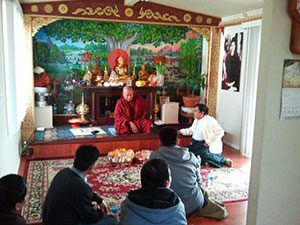 Denver and spent many hours talking with fellow countrymen now living in the United States. 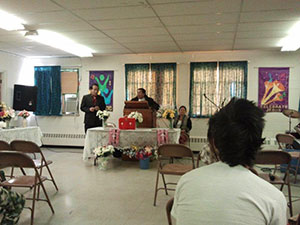 Afternoon: Visit to the Denver Art Museum and Denver Public Library. Mr. Than was fascinated by the unlimited access to art and any kind of books that was available to local Denver residents at the museum and library. Mr. Than’s reaction reminded me that this access was something that is taken for granted here in the US.

Morning, Mr. Than had his first experience visiting a “Doggie Day Care” 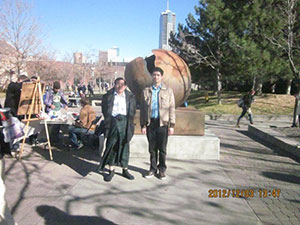 Sightseeing with Yuji on the CU Denver Campus

center; he was quite amused to see a day-care center for dogs! Something unheard of in Myanmar.

Noon: Mr. Than gave a lecture on recent history in Myanmar at the CU Denver campus for a course in Social History of Asian Americans.

Afternoon: A drive into the Rocky Mountains to the historical town of Georgetown with Nippon Kan Staff-Yuji.

Noon: Visit to the Denver Post Newspaper. Mr. Than met with Denver 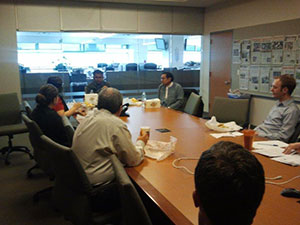 Poster editors and writers in a question and answer session to discuss current events in Myanmar. He was also able to sit in on the Chief Editor’s production staff meeting and tour the facility guided by Linda Shapley. This visit was organized by Jeff Legwold, a well known sports staff writer for the Denver Post who has also served as Instructor for the Nippon Kan Youth Program.

In the evening a welcome dinner reception was held in Mr. Than’s honor 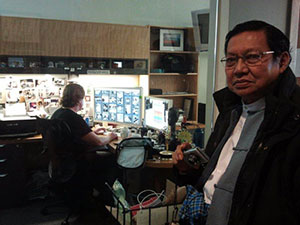 at Nippon Kan. In addition to Nippon Kan Board members, staff and other guests in attendance, Nippon Kan General Headquarter Honorary Advisor Judge Kerry Hada was in attendance and presented framed letters of welcome from Denver Dignitaries. (listed below).

In the evening a welcome dinner reception was held in Mr. Than’s honor at Nippon Kan. In addition to Nippon Kan Board members, staff and other guests in attendance, Nippon Kan General Headquarter Honorary Advisor Judge Kerry Hada was in attendance and presented framed letters of welcome from Denver Dignitaries. (listed below).

The welcome dinner was prepared with traditional Myanmar cuisine by 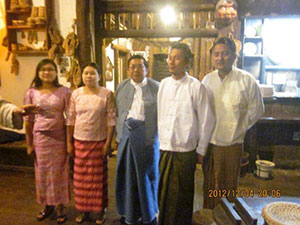 Lakhine tribe refugees who have relocated to Denver. They wore traditional Myanmar clothes for the occasion and their pride and patriotism could be felt throughout the event. 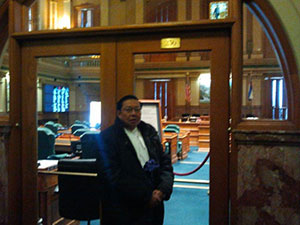 At the Denver State Capital 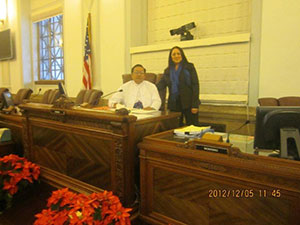 Afternoon: Tour of the Denver Courts with Judge Kerry Hada- a fascinating 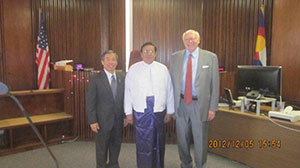 firsthand look at American democracy in our judicial system.

Evening: An adventure into the “Wild West” with a visit to a local western 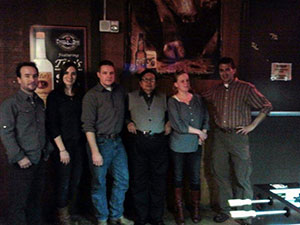 A taste of the west at a local western dance hall

Morning: The last morning in Denver was spent shopping for souvenirs 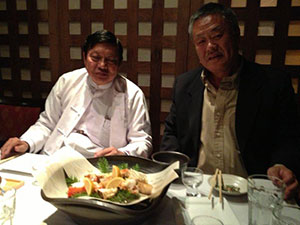 and electronics which are much more inexpensively priced here in the US.

Evening:  Homma Kancho hosted a farewell party for Mr. Than at a popular sushi restaurant. Mr. Than seemed to have quite a taste for sushi and sake!

Homma Kancho accompanied Mr. Than to the city of San Francisco. Mr. 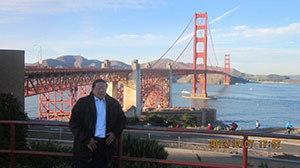 At the Golden Gate Bridge in San Francisco

Than enjoyed the view of the Golden Gate bridge and harbor, telling Homma Kancho, “This is a dream come true”. 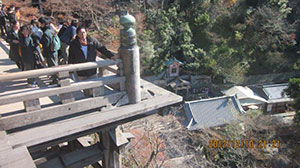 At the Kiyomizu Temple in Kyoto, Japan

of life in Japan. After attending a welcome party hosted by Japanese staff upon arrival, Homma Kancho escorted Mr. Than to Kyoto for sightseeing and to some of Tokyo’s famous temples and shopping areas. 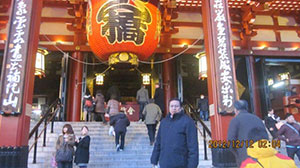 After a whirl-wind two week tour of the United States and Japan, Mr. U Than returned to Myanmar accompanied by Homma Kancho. A trip of a lifetime for Mr. Than and all of us at Nippon Kan. Thank you Mr. Than for inspiring such a wonderful experience.