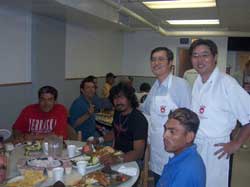 Nippon Kan has been serving monthly meals to the homeless at the Denver Rescue Mission since 1991. On July 19th, 2005 a milestone was reached with the 40,000th meal served. To mark this special occasion, Nippon Kan volunteers were joined at the Mission by honored guests, Consul General of Japan, Mr. Yuzo Ota, and Japanese Firms Association President, Mr. Takayuki Suzuki for a special ceremony and meal service.
Before the evening service of 300 meals was served, Mr. Ota, Mr. Suzuki and Nippon Kan President Doug Kelly toured the facility with Mission staff members. The staff answered questions at length posed by Consul General Ota and Mr. Suzuki who as leaders in their own communities were interested in the solutions posed by the Denver Rescue Mission to the problem of homeless in Denver. 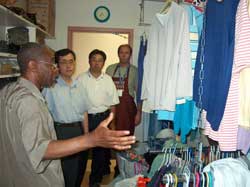 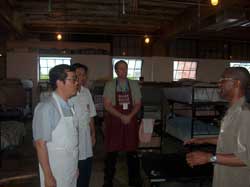 After the conclusion of the tour, our guests joined Nippon Kan volunteer staff members in the dining room to prepare for the evening meal service. Consul General Ota served the meal trays personally to each outside guest as they arrived. The 40,000th meal was served to Mr. Allen Campbell who good naturedly allowed us to take a photograph for the occasion. Both Consul General Ota and Mr. Suzuki worked hard making sure each guest received a full meal. Mr. Suzuki served water vigorously, carrying a pitcher in each hand. “This is better exercise than golf” remarked Mr. Suzuki. 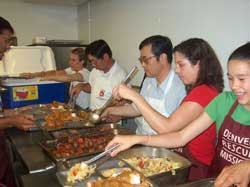 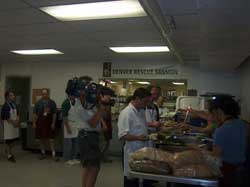 TV news crew on location at the Denver Rescue Mission. 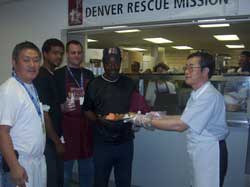 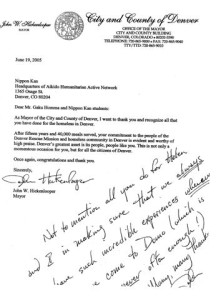 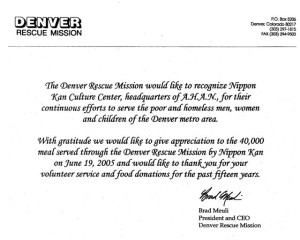 For this special meal service, many of our seasoned and new Nippon Kan volunteers were in attendance. A reflection of their experience, one comment from a senior volunteer was, “and now we start with 40,001…”

Everyone worked together as an experience team to serve about 350 meals. It was quite a pleasure to have Consul General Ota and Mr. Suzuki join us for this special day, and we all were proud that they had taken the time out of their busy schedule to join us.

To have the 40,000th meal served by Nippon Kan delivered by Consul General Ota is an honor I will not forget. I appreciate very much Consul General Ota’s community mindedness and thoughtfulness in joining us on this day. 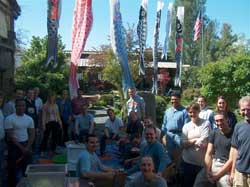 Thanks also to the early morning student prep crew! 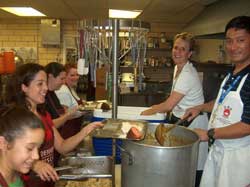 Nippon Kan staff shine with smiles from the heart.