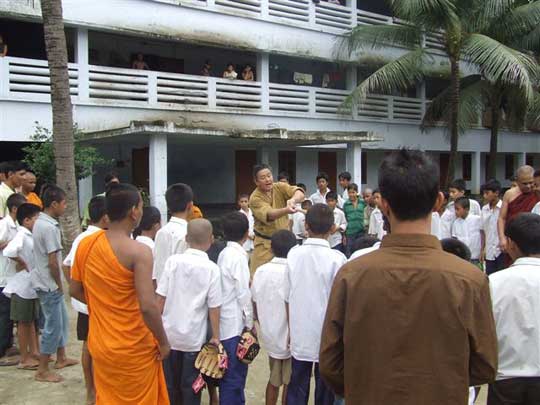 While in Turkey, Homma Kancho took time out to visit Bangladesh and assist in the first rice delivery for the Dharmarajika Orphanage. He brought with him baseball bats, balls, and enough gloves to make four baseball teams. Homma Kancho joked, I am NOT a serious baseball player, not good enough at the game to be teaching it, but with about 200 boys clamoring to play, I will give it my best!  Homma Kancho gave a valiant effort in trying to teach the game of baseball to so many very excited boys. I am not sure all of the rules of the game were understood clearly, but they had a great time hitting and catching all of the balls that were flying everywhere!

Homma Kancho decided on the baseball equipment donation about five days before leaving on this trip. Nippon Kan members quickly organized and got the equipment together. Speaking about the baseball equipment, Homma Kancho said “I have met many sad children in the world. Through AHAN, we have tried to help the children the best we can in many countries I have visited. In February I met the children in Bangladesh. I remember standing on the second story balcony of the orphanage dormitory looking down at the bumpy playground below. The kids were playing with a ball made of rags and a tree branch for a bat. I could not tell if they were playing a form of cricket or baseball, but they were playing. I thought, how can I share with these children.

My first thought was, I am Aikidoka, and maybe I can somehow share Aikido with these children.  I thought again. For these children living in these conditions, teaching them nikkyo or shihonage just didn’t seem to make sense. I felt the limit of where I could reach with Aikido at that moment. Bangladesh does not yet have a deep understanding of Japanese martial arts; their only exposure to them being through the cinema. To try to teach these children correct Aikido technique and philosophy might be possible, but it would take a tremendous amount of time. Better I thought, to share with these children in something they were already interested in. Baseball! I thought, not only was it good physical exercise but it also would teach teamwork skills. 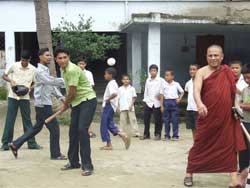 The stance is actually a cricket stance. 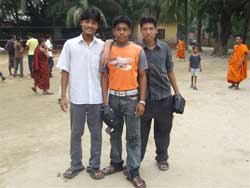 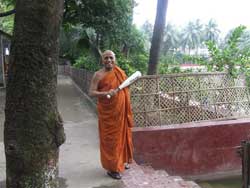 The Founder and high priest of the Dharmarajika orphanage holding a new smurf bat. 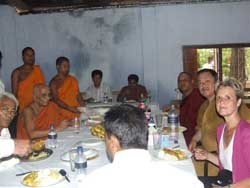 Lunch together with the Founder and staff.

When I was a kid, I never was truly interest in ball games, but never the less, I found myself in the position of instant coach! I drew a home plate in the dirt and stood over it. All of the boys were very enthusiastic and excited; even if they did not know the rules of the game. I had to keep my eyes open, and ready to duck, there were so many balls flying through the air! It was fun, and for a moment I felt like I had returned to my own childhood along with all the other boys.” 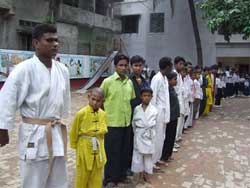 All of the children line up waiting for us to arrive. 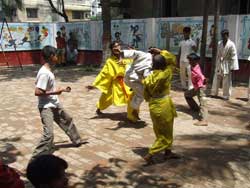 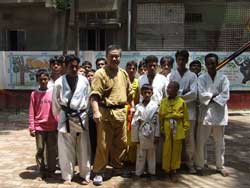 Homma Kancho and the demo team. 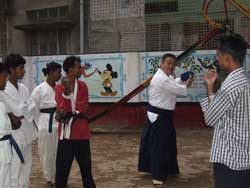 The next day, Homma Kancho sat watching a Chinese martial art demonstration at the Paris International Elementary school put on by the boys in the martial art class that met early each morning before school. Using a ball and mitt, Homma Kancho taught the boys about flexibility with practice of tai sabaki movements.

All of the baseball equipment, soccer balls and school supplies donated to the orphanage and the elementary school in Dhaka were put together by Nippon Kan headquarter members in Denver. Thank you to everyone for your help with this project! 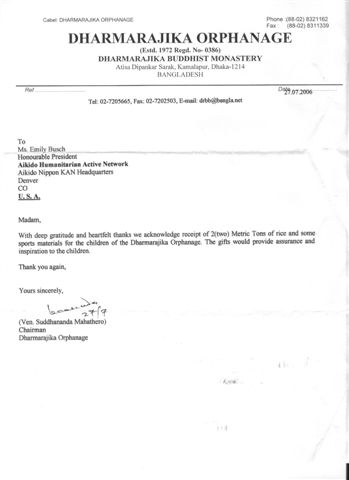