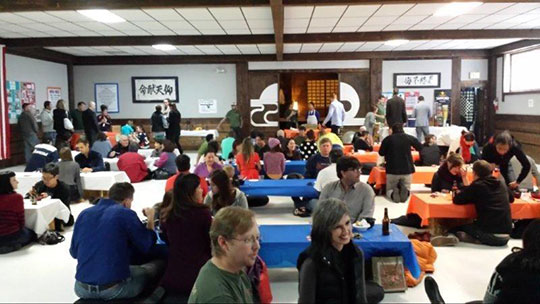 January is always the best time for enrollment in our new Beginner’s Aikido classes, so this year in December, we held an open house. Envesco Field stadium where the Denver Broncos play their home football games is very near Nippon Kan. From our parking lot it is about a 15 minute walk to the stadium. For home games, over 60,000 fans fill the stadium less than a mile away. It was Homma Kancho’s idea to have a “Tailgate Party” before a game at Nippon Kan in December. The idea was to introduce Aikido at Nippon Kan to a new audience and Hakama members served as hosts for the Tail Gate Open House. The Hakama members were equipped with information about Nippon Kan’s history and classes offered for our guests.

We planned the event in 6 days and advertisement for the event began 3 days before the party. The party reservations were filled to a capacity of 250 in less than 12 hours and reached a reset limit of 350 people in less than one day. Actual attendance was about 300 guests and it was a very fun event! 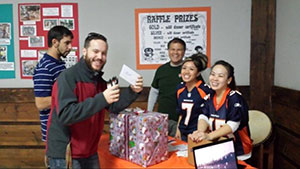 Tail Gate Raffle – there were prizes for everyone in this raffle! 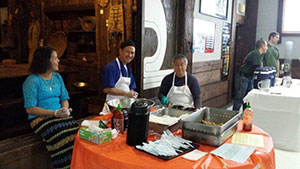 Domo favorites; Noodles and Curry- six kinds of food served, all free to all guests

With free food and drink, raffle prizes and more, the party was a big success. Even if we had spent twice the amount on advertising in the local newspapers it would be difficult to get 300 people to respond and come directly to the dojo. Our guests seemed genuinely interested in what Aikido classes Nippon Kan had to offer and asked many questions and took flyers home. Many thanks to our student staff who helped make this event a great success.