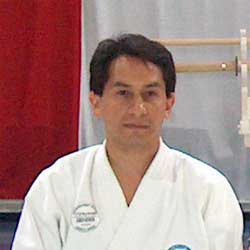 Under the guidelines of AHAN philosophy and the guidance of Homma Kancho’s teaching, AHAN Central America has been quite active in 2006. Homma Kancho’s dream for AHAN has been for local AHAN IISA (Instructors in support of AHAN) to be able to act independently in promoting AHAN activities in their own countries and to organize support for their own communities. The purpose of Homma Kancho’s travels around the world is to teach the philosophy and methodology of AHAN so that local instructors can take the lead in continuing the work of AHAN in step with the needs and abilities of each local community. The dream has been like the dropping of a pebble in a still pond; the pebble makes waves that continue outward into the future. 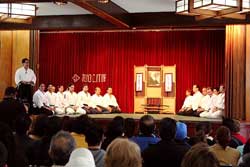 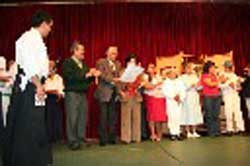 AHAN Mexico, AHAN Nippon Kan Headquarters and Homma Kancho have organized three other fundraising seminars for the Casa de la Amistad in years past and Homma Kancho was very excited to hear about this independently organized fundraising event.Close to $2000.00 was raised at a demonstration event by AHAN Mexico for the Casa de la Amistad, a center for families who come to Mexico City from outlining regions of Mexico for cancer treatments and for the Japanese Mexico Association who co-sponsored the event. Dr. Tanaka, director of the Casa de la Amistad and Mr. Kawami, President of the Japanese Mexico Association as well as 200 patrons were on hand for this special event.