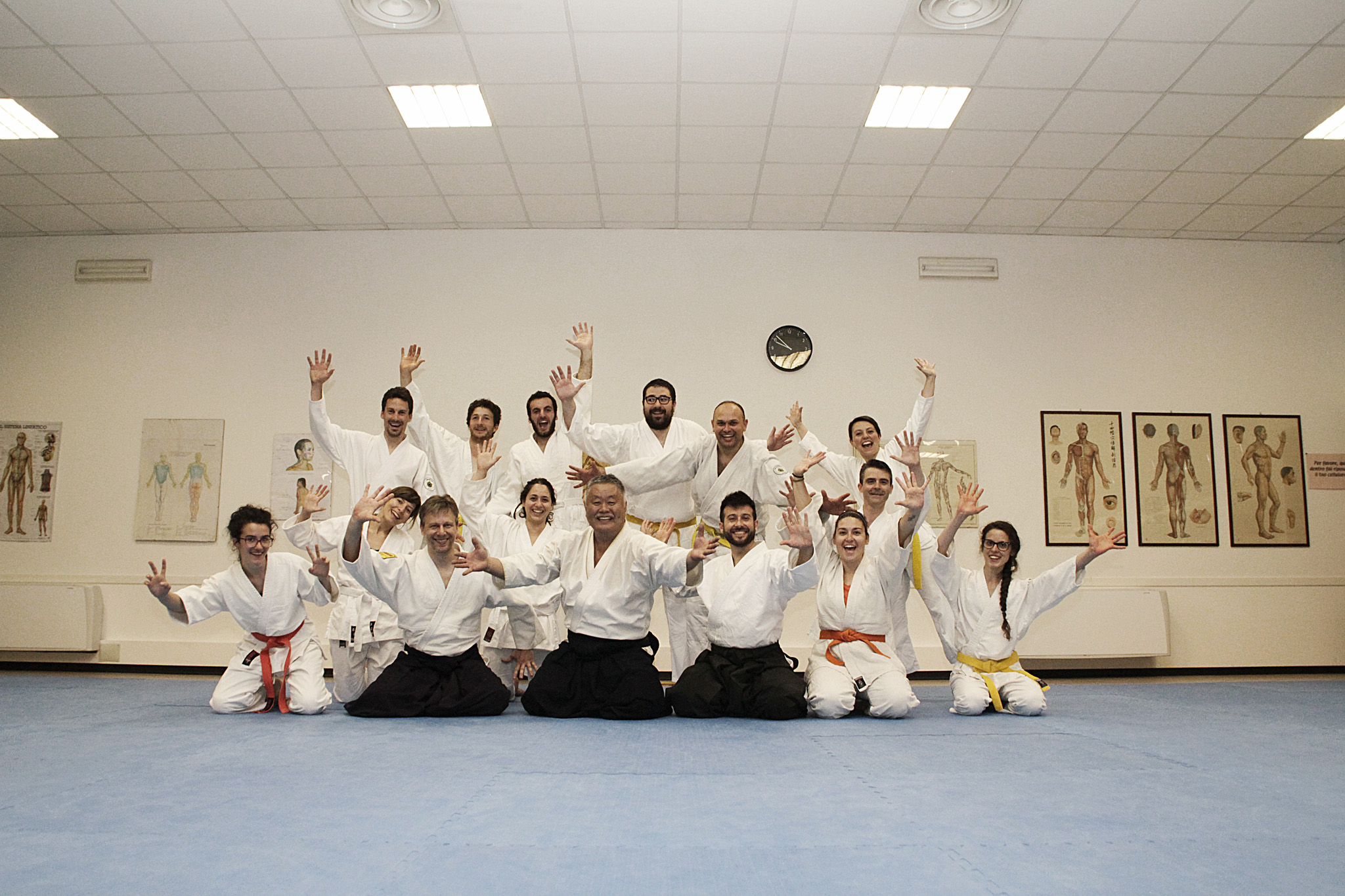 A Spring Seminar in 2018 at Ren Sei Kan Dojo in Italy in support of Alzheimer Piacenza. 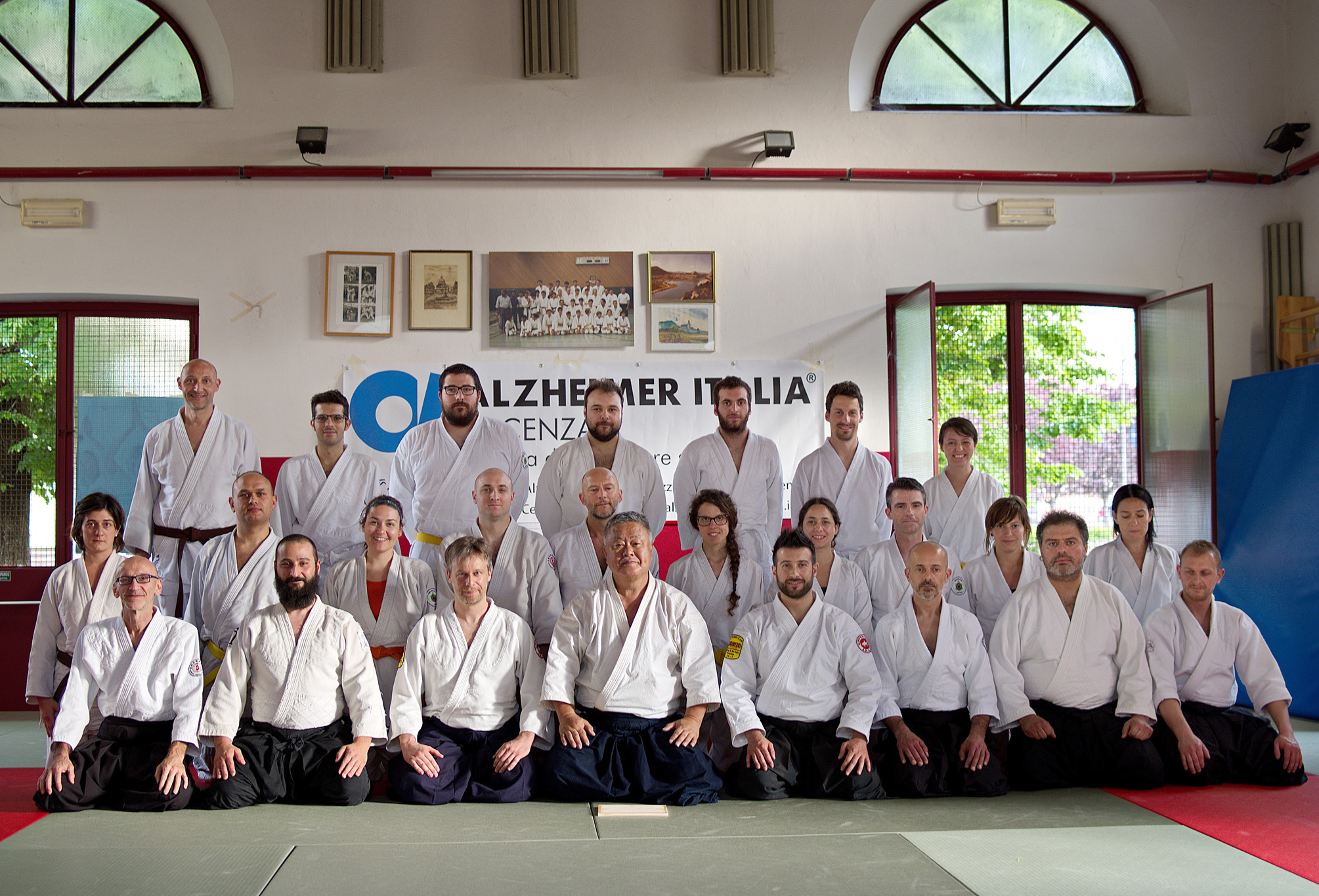 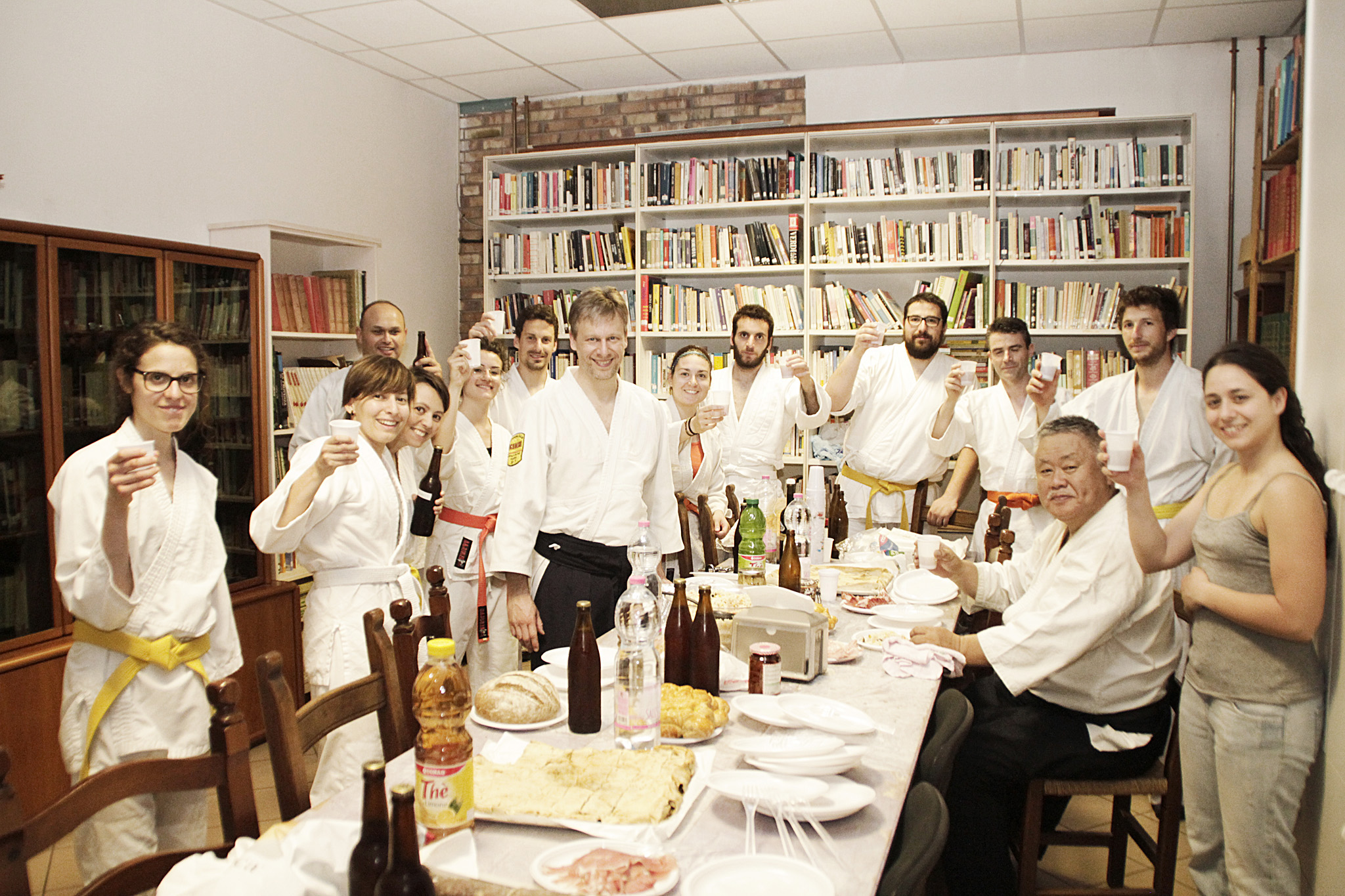 Parma, Italy in Spring is like a rural area in northern Japan where I grew up.  You cannot help noticing the pleasant smell of the grass in the air and also the aroma of compost from the fields afar carried by the wind.  Cheese is delicious and the taste of thin slices of prosciutto is so deep and scrumptious.  And a bottle of home-made wine that is out of this world…!  I cannot help wondering how that historic Italian Baroque musical composer Giuseppe Verdi created such powerful and passionate scores of music while having spent his childhood years in such a peaceful region.

Students come from all walks of life at Ren Sei Kan Dojo where I visited, such as a female dairy farmer who cares for over 200 cows, a vegetable farmer who is growing tomatoes in a vast, fertile land and a well-known designer and a famous architect, just to name a few.  Everyone is enjoying each other’s company when they come together to keiko in Aikido at Ren Sei Kan Dojo.

It’s been almost 3 years since Michele Zanrei Sensei & Luca Bocedi Sensei opened the Dojo in Parma, Italy.  While the size of the Dojo is still small with about 20 students, and especially so, the camaraderie and the sense of teamwork among them are very strong.  And both Sensei are well experienced to lead their students in the practice of Aikido backed by their multiple completions of uchideshi training at Nippon Kan Headquarters in Denver, where Michele Sensei & Luca Sensei have completed 11 times and 6 times, respectively, to date. 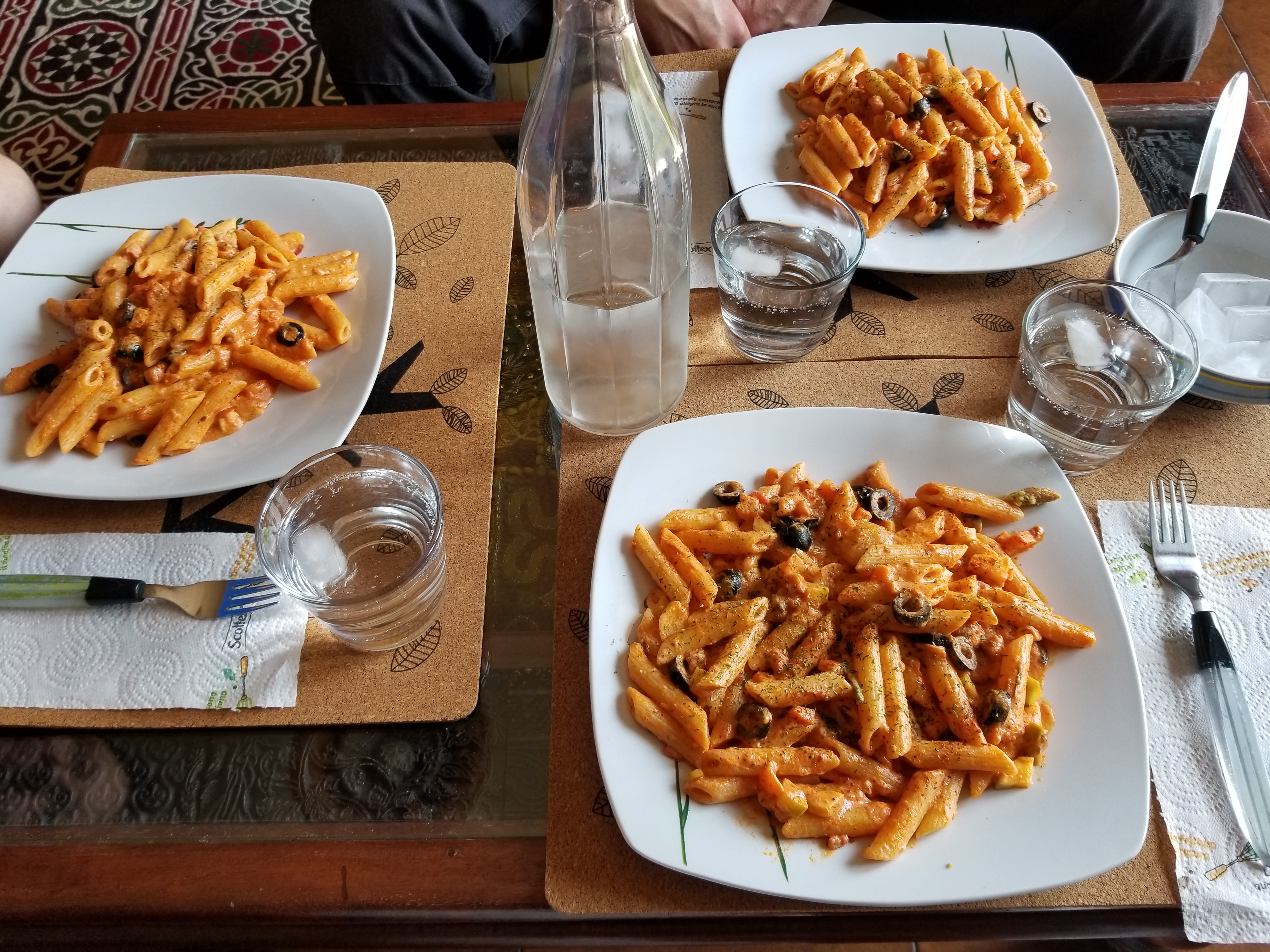 I have been making conscious efforts to visit and support budding Dojos like theirs and small Dojos where students share a strong sense of pride and camaraderie with one another.  It’s because these Dojos not only remind me of the beginning years of Aikido Nippon Kan in the U.S. that I founded decades ago but also help me renew the spirit in me.

Anybody in a position of instructing, especially Japanese instructors who left Japan for a foreign country, are alone in the beginning.  None of them was accompanied by a dozen or dozens of students to start a Dojo.  They all recruited the 1st student, the 2nd student and so on, one by one, to be where they are today.  And it’s not too seldom for some people to forget their humble beginning especially when their organizations have become so big.

To me, visiting local, budding Dojos is a way for me not to forget my roots and reinvigorate the spirit that I had when I had my Dojo.

Sometimes, I hear of some rumor that I’m aiming to create a network of my own organization, which is totally a false idea and utterly a funny claim.  As I am to reach the age of 68, if I were to be still pursuing such a wild idea to create a network of my organization, it would a wildly irresponsible act on my part.  Quite contrary to such a wild and absurd claim, I see my Dojo visits as a personal pilgrimage to my past.  In fact, not only do I always pay for all the travel and related expenses, but I either conduct a seminar for free or donate all the seminar fees collected to a local charity of choice by the local host Dojo in accordance to my own credo.

Michele Sensei and Luca Sensei took very good care of me during this visit, just as they have always done so in the past.  Michele Sensei’s pasta dishes are so delicious that I couldn’t help blurting out a promise that “I will definitely come again next year!!!” 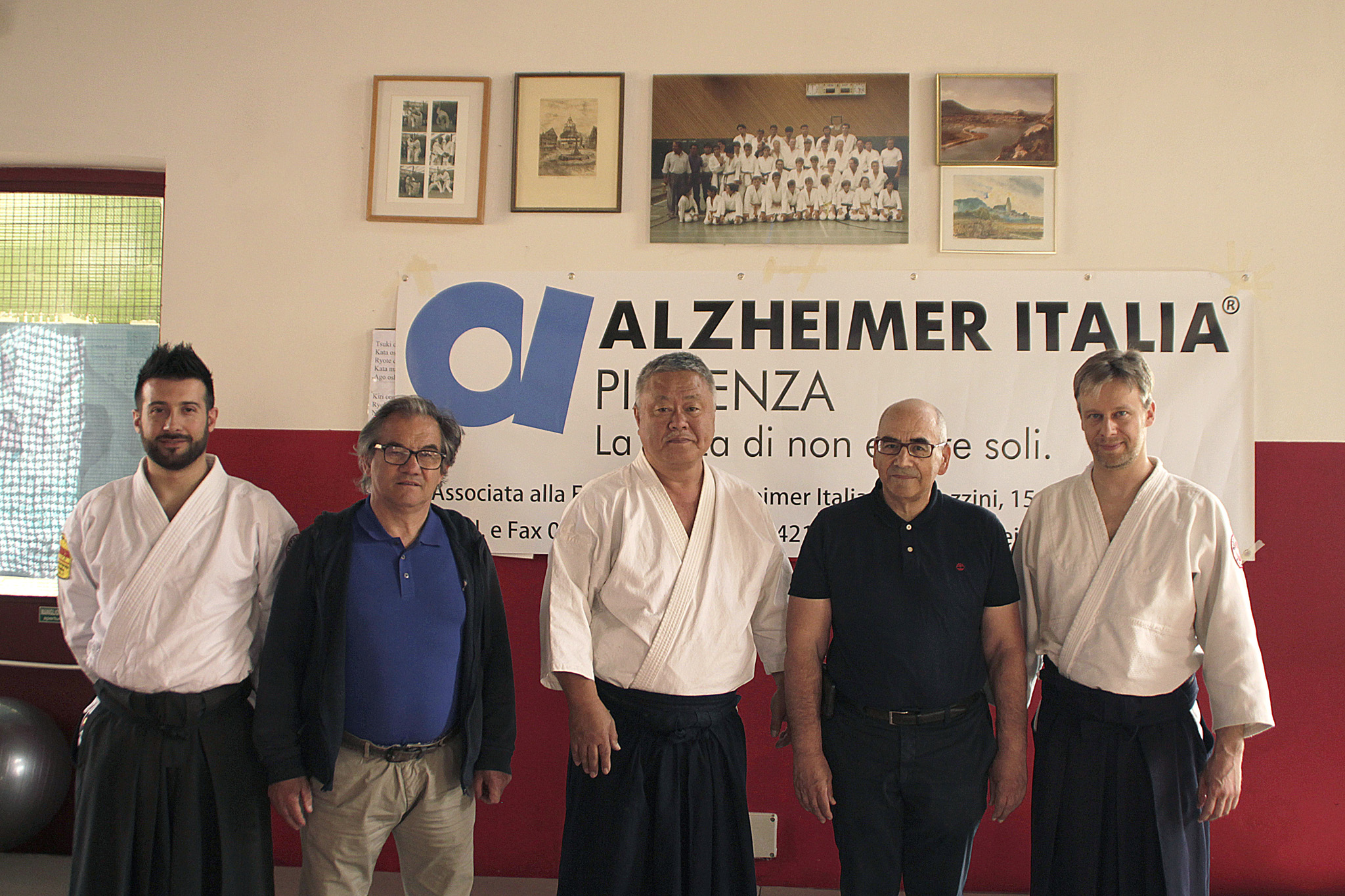 My sincere gratitude should also be extended to all the members of Ren Sei Kan Dojo as well as All Aikidoists in Parma, the representatives of the Alzheimer Piacenza Association, the president Mr. Andrea Gelati and the advisor Doctor Mauro Bonomini.

Thank You very much to All for your support and hospitality!