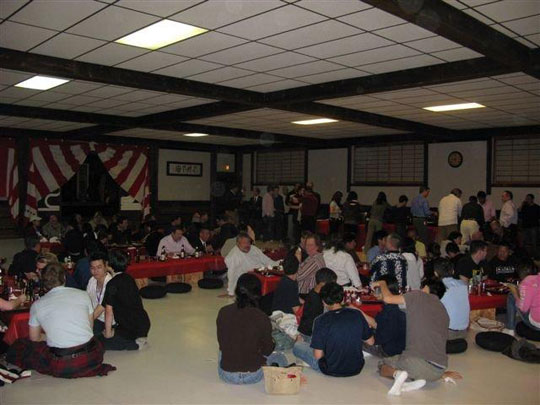 Even with a busy schedule working at the Japanese Consulate in Denver, Kosei Ishikawa Sensei still finds the time to teach traditional Japanese Kendo in Denver. Ishikawa Sensei and Denver Ito dojo, www.denverkendo.com sponsors the Ito Cup tournament with competitors from Japan, all parts of the United States and Canada.

In a spirit of kinship in the martial arts, and in support and respect for Ishikawa Sensei’s efforts to teach traditional Japanese Kendo in the United States, Homma Kancho opened the Nippon Kan dojo for a reception for all Ito Cup tournament competitors and staff. Close to 100 people gathered at Nippon Kan for a dinner party held in the dojo. I could appreciate the high level of accomplishment and great attitude in both the instructors and students who attended the event. I encourage anyone interested in this traditional Japanese martial art to contact Ito Dojo.