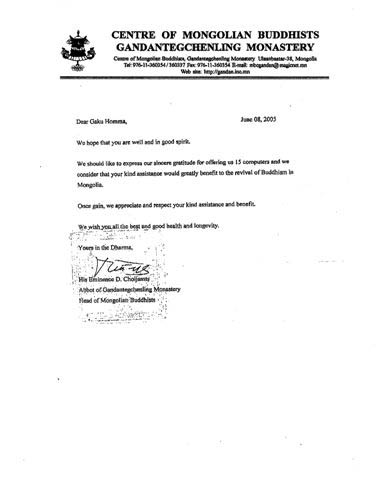 A thank you letter from Choijamts Hamba Llama, of Gandan Temple, the Highest Buddhist Llama in Mongolia 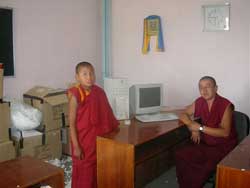 The shipment of thirty computers that were shipped to Ulaanbaatar, Mongolia last April arrived safely on June 4th. Fifteen computers in this shipment went to the Gandan Temple in Ulaanbaatar to be used in the temple’s educational facilities. Ten more computers were also donated to the Zorig Foundation, and five were distributed to local schools by the AHAN Mongolia staff. This time, the School named Hope received a shipment of other badly needed school supplies such as pens, pencils, paper, calculators etc.

In the past year, AHAN has now shipped 60 computers to Mongolia to different support organizations, schools and temples. Our first goal is to send a total of 100 computers, and at Nippon Kan headquarters in Denver our staff is busy preparing the next batch of computers for shipment.

As we near our goal of donating 100 computers to Mongolia, we are now looking to expand this distribution program to other areas in need. Support for this project by the Denver community has overwhelming, and we thank everyone for their donations of computers, and the time and expertise needed to ready them for shipment. Our biggest challenge in expanding this program to other countries is in the transportation of the computers. Currently our research staff is exploring new avenues of export for these important gifts.